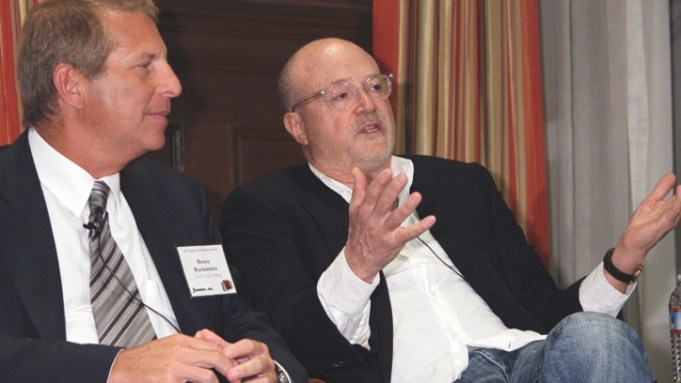 It was everything short of fisticuffs at the Financo forum Monday night as senior retail executives testily debated price, the Internet and expansion — all while trying to outshine each other.

The Financo event, always a lively affair, this time featured the outspoken Sir Philip Green, Topshop’s owner, whose repartee swung from jovial in nature to downright confrontational. At times, Green challenged Betsey McLaughlin, Hot Topic Inc.’s chief executive officer, who struggled to complete her point about the value of twittering and social media as a driver of traffic to the stores, and he taunted audience member Ken Walker of the Walker Design Group, who said he believes eBay Inc. and Amazon.com will one day overtake Wal-Mart Stores Inc. in volume.

The other panelists were Millard “Mickey” Drexler, chairman and ceo of J. Crew Group, who added an edge by debating the importance of price with Bruce Rockowitz, president of Li & Fung Ltd., and was needling Rockowitz into disclosing his retail clients, but Rockowitz resisted. James Fielding, president of Disney Stores, and Solomon Lew, chairman of Australia-based The Just Group, rounded out the panel.

The question-and-answer segment got particularly testy when Walker accused most of the panel of not fully embracing the technology revolution. “I don’t think you see what [the Internet] is doing to conventional retailing,” he said. “The high street is protected. But you have to rethink the nature of retailing out there. I think two of you are getting it. But in three to five years, 60 percent of the panel won’t be here,” meaning not in business.

“Shall we have a public bet?” Green responded, egging Walker on and asking him, “How long have stores been around?”

“How long is that?” Green asked rhetorically. “Tell me something; you haven’t told us anything.”

Asked by Green what he did, Walker described himself as an architect of stores and a branding expert, among other hats he’s worn. Financo Inc. chairman Gilbert Harrison, who did his best to try to contain the dialogue, described Walker as designer of many department and specialty stores, suggesting Walker practically fathered the formats. That also didn’t sit well with Green, who blurted, “You mean he’s a shop designer.”

Amid all the Internet buildup as the future for retail, David Simon, ceo of Simon Property Group Inc., rose to the defense of brick-and-mortar stores, maintaining Amazon has an unfair advantage by not being burdened by sales tax. “They’re getting an 8 or 9 percent benefit. What happens if that changes?” said Simon from his seat in the audience. There is that possibility, since retailers have been lobbying for an equal playing field.

Industry veteran Stuart Kreisler raised another issue that could take some of the sizzle out of online sales: “How many UPS trucks can you put on the streets?” he asked.

Mindy Grossman, HSN’s ceo, had the final word about where retailers should focus, and it doesn’t have to come down to one, two or three channels, she said. “It’s not one thing. You’ve got to know where your customer is,” she said, adding it’s all about figuring out “the equation.”

Ultimately, Hot Topic’s McLaughlin did have her moment, crediting an “experiential” bond with her customers as being key to the success of the teen retail chain. McLaughlin, who oversees nearly 900 stores under the names of Hot Topic, Torrid and ShockHound, has embraced social media to stay connected to her audience. In the not-too-distant past, she said, retailers “paid premium rents” to be in teen-friendly malls, but today, “That traffic is no longer there. The place for them to hang out today is the Internet.” Instead of hitting the food court, teens are connecting “virtually.”

McLaughlin said there are three reasons shoppers come to a retail store: for a “must-have product;” a compelling price, like Aéropostale’s $5 T-shirts for holiday that attracted a “feeding frenzy,” or for a unique experience, such as meeting a movie or music star. It’s the latter that Hot Topic embraces. While only 5 percent of Hot Topic’s and 15 percent of Torrid’s sales derive from the Internet, McLaughlin said the number is growing at 100 percent annually.

McLaughlin pointed to an Internet phenomenon that surfaced last week when around 1 million women — most of whom were over the age of 25 — posted their bra colors on Facebook. Although the origin of this campaign is unknown — it was originally believed to be breast cancer-related, but now does not appear to be — McLaughlin said it proved the power of the Internet.

For Fielding of Disney, “storytelling and service” are key to attracting customers. Disney also uses Facebook and Twitter to “stay in touch” with his customers and get feedback on Disney stores and products.

“Industry change is a given,” stated J. Crew’s Drexler. “If you don’t figure out how to do it, you are not going to be around five years from now….Speed of change is faster than ever.”

As a retailer, you “never want to depend on price because the Internet has made everything available to everyone in the world at the same time,” Drexler said, after Rockowitz’s comment that last year, all of his clients were focused on lowering prices.

He said J. Crew will be going into the U.K. via the Internet and is already there in Canada, but downplayed expanding cross borders with stores: “I don’t know what the rush to be big is about. For us, bigger is not better. Better is always better.” Past a certain point, “with every store you open, there is a diminishing return. If a deal does not pencil out, you are not opening a store. The capital to go online is zero. The race is to maintain integrity to your product. I go to my stores every day. We run stores personally and individually. It’s product, store experience, connecting emotionally and its value….I don’t see many companies winning with a global strategy.”

Green described himself as a self-taught retailer, the biggest private employer in the U.K. with 45,000 employees and someone who wakes up each morning with a new idea. Last year, he said, “has forced everybody to be efficient. There is a difference between being efficient and cost-cutting….Speed is just as important, if not more important, than price.”

He said a retailer ignores the Internet at their peril, and that he is testing machines in 25 stores to order a Topshop product that might not be available at that moment, which a customer will be able to pick up later at the store. He also said he’s considering 10 to 12 flagships in the U.S.

“We like high streets,” he said. “I am a little bit nervous about shopping malls in America. Half these places are never seeing any people.”

Lew of The Just Group said he doesn’t have an M.B.A. but manages by M.B.W.A., which means “managing by walking around,” staying in the stores and staying close to the products. Brands under Just include Just Jeans, JayJays, Jacqui E, Peteralexander, Portmans, Dotti and Smiggle.

Lew noted Australian retail was not hit as hard as the rest of the world, due to the government moving quickly at the end of 2008 with a stimulus plan. While he acknowledged the Internet is playing a bigger role in direct-to-consumer sales, “successful still means brick and mortar.”

Rockowitz of Li & Fung said the key to success for retailers and vendors is having the right product. In 2009, Rockowitz said, “We saw worldwide price became the primary concern of everyone.” He noted even Japan in 2009 “turned to price,” which was never an issue before. However, in Japan, the business relationship is more important than the best price. That’s different from doing business in the U.S. where price is a primary concern.

Drexler joked with Rockowitz that he didn’t know Li & Fung also does business on the “high end too” — but on a serious note Rockowitz said the “biggest cost to product has to do with markdowns,” noting also “there’s no shortage to goods in the stores.”