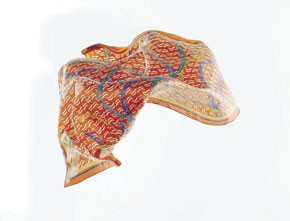 BOTKIER GOES LIVE: Botkier, the New York-based accessories company, has relaunched its Web site, Botkier.com. The site showcases all of the brand’s categories, including new products such as footwear, belts, small leather goods and some jewelry. Prices range from $125 for a smaller leather case to $795 for a woven tote bag.

“We have been in the e-commerce business for a while now, but felt it was the right time to relaunch our Web site,” said designer Monica Botkier, who estimated the site will generate $1 million in sales in its first year. “With the launch of footwear and small leather goods, it’s a good opportunity to show a new expanded vision of the brand and the Web site is a perfect vehicle….International distribution is ever changing and expanding into new markets as the brand becomes well known to the international clientele. In terms of the U.S, we have very tight distribution.”

DIDDY CARES: Sean Combs has designed a limited edition scarf in tandem with Dress for Success and Diaego, the spirits, beer and wine firm. The “Something to Share” scarf will retail for $30 and 100 percent of the profits will benefit Dress for Success, a nonprofit organization that provides interview suits and career development help to low-income women. The scarf and a $30 pocket square are available on somethingtoshare.org.

Combs is the face of Ciroc vodka, which is owned by Diaego.

PROJECT ACCESSORY: Accessories-designer hopefuls have another chance to prove their talent at the second annual Independent Handbag Designer Awards on June 18 at the New York Historical Society. Submissions are being accepted from Feb. 29 through April 15. Rules and regulations can be found at handbagdesigner101.com, which explains all of the information regarding the award’s categories, such as Best Handmade Handbag, Best Student-Made Handbag, Most Socially Responsible Handbag and Best Handbag in Overall Style and Design. The winner of the latter category will have the chance to showcase the collection with a free booth at the MAGIC Marketplace show in Las Vegas in August. Other finalists in the competition will have their bags featured in a window display at Henri Bendel in Manhattan and will host a trunk show there. The winner of Best Student-Made Handbag will begin an apprenticeship with the Henri Bendel accessories design team.