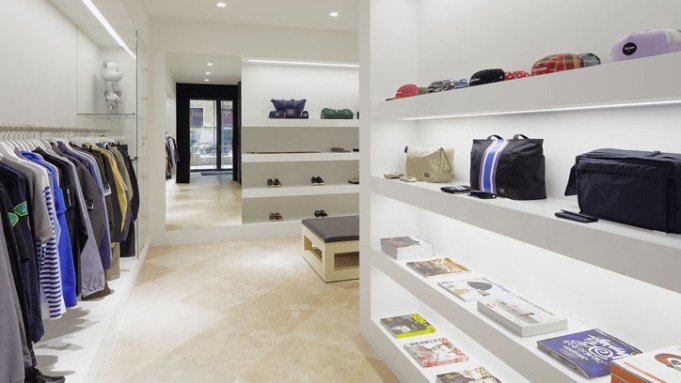 When it comes to interesting store openings in Berlin, it’s currently a men’s moment. And leading the pack is Firmament, which in May moved from its slightly secretive second-floor apartment location in Prenzlauer Berg to the much heralded L-40 building on Linienstrasse in Mitte. But for shoppers, the thrill of discovery remains, having crossed the threshold and actually entered part of this private, Darth Vader-like construction, a collaboration between artist Cosima von Bonin and architect Roger Bundschuh. And, as with the original store and its older online brother, the Glade, founders André Storvoll and Jörg Haas have a penchant for stocking some of the most sought-after, hard-to-find and increasingly sophisticated streetwear labels on the planet.

These include the Berlin- and now partially Brooklyn-based collection Acronym, whose minimalist-modern basics are executed in high-tech fabrics and spiked with functional but purposely hidden digital age details. Living Mutants, also a local label, is the only other German brand in the store.

The building’s jutting asymmetric lines caused the store’s carpenters some headaches, especially the big window front, which was turned into a wood-paneled walk-in display space for special installations and product presentations. As for Firmament’s assortment, Storvoll noted: “The portfolio is always in motion. We’re pleased with the configuration today, but we’re always looking for new brands.”

So, apparently, is the store’s fan base, which even includes notables like Eric Clapton. In Berlin for a gig, Clapton stopped by the new location. “He’s into the Japanese brands,” Storvoll explained, “and is friends with Hiroshi Fujiwara.”