The store has created a pre-owned and vintage shop and now offers more-inclusive sizing.

Fivestory has a curated mix of women's luxury brands.

NEW YORK — Since the day she purchased Fivestory last fall, Karen Murray started dreaming of having a Madison Avenue address for the luxury women’s store. So when a prime location became available at 1020 Madison Avenue at 79th Street, sandwiched between Serafina Fabulous Pizza and La Maison du Chocolat, she saw her chance.

Although the landlord had a number of businesses interested in the five-story rowhouse that was constructed in 1913 and had formerly housed a Lilly Pulitzer store, after listening to Murray’s plan to reinvent the business, he decided to rent it to her. She finalized the deal to move from Fivestory’s original location at 18 E. 69th Street on March 11, right before the coronavirus pandemic caused the world to hit pause two days later.

It took until the middle of July for the store to be renovated and reopen — as Fivestory on Madison —  but it is now up and running. While many of Fivestory’s well-heeled Upper East Side customers are still out of town, the ones who have returned are beginning to shop again. And while they may be buying fewer party dresses and more luxurious casualwear, they’re no longer afraid to come to a store, and the business is reaping the benefits.

“The store was doing really well in its original location,” Murray said during an exclusive walkthrough with WWD earlier this week. Although it was tucked onto a side street and was a true destination retailer, the store had attracted some 64,000 followers on social media and had a loyal customer base that was passionate about the highly curated, experiential store that was founded by Claire Olshan and her father, Fred Distenfeld, in 2012.

“I believed that by moving to the best street and the best area of New York, we could quadruple the number of customers and do two to three times the sales,” Murray said of the shift to Madison Avenue.

That was before COVID-19 caused a mass exodus of residents and tourists from the city. Murray suddenly found herself surrounded by hundreds of thousands of dollars worth of merchandise that had been ordered and delivered before the pandemic.

But while others might have run for the hills, Murray hunkered down. She had a vision on how to change the business and position it for future success, and while the pandemic certainly took its toll, she didn’t waver from that vision. “This store is about art, fashion, curation and discovery,” she said. 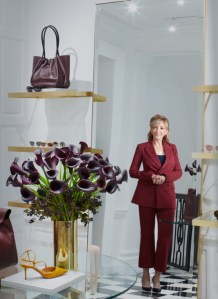 Plus, with the closure of Barneys New York and Jeffrey, Fivestory is one of the few multibrand luxury women’s boutiques left in the city. “I don’t think there’s a single store in New York City that offers current, new designers, exclusives, pre-owned and vintage,” she said. 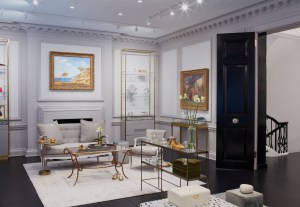 The store will showcase a rotating display of artwork.

Sizing was expanded to be more inclusive, she said, and there is now a wide range of price points available. “We’re still a luxury store, but you can get a $5,000 dress or a $60 candle,” she said.

In addition to designer brands, the store created a new business opportunity: a department devoted to “pre-loved” and vintage pieces that come from either Murray’s personal collection or from a very limited pool of trusted friends. In addition, jewelry and home goods are being offered at the store.

With the concept set and the original location shuttered for the pandemic, Murray set out to renovate the Madison Avenue site. She hired Robin Kramer of the Kramer Design Group, who has worked with such brands as Calvin Klein and Michael Kors, to help her redesign the space. Although the fireplaces and crown moldings were retained along with the “palatial” metal gates on the front door, “we stripped everything, ripped out the cash wrap that took up half the first floor, redid the fitting rooms,” Murray said.

The result is a luxurious, residential aesthetic that is a fitting showcase for Fivestory’s upscale concept that spans 4,000 square feet of selling space on two floors. 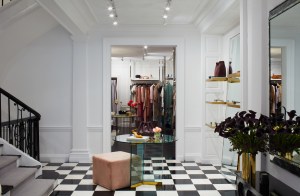 The rowhouse was built in the early 1900s.

Upon entering, customers find a station for hand sanitization and masks, along with new arrivals, with a focus on new and emerging brands. Further back is a footwear and accessories area, a section devoted to dressy event-driven outfits and outerwear. “We used to be the place to go for your event, but that’s where we’ve shifted,” Murray said. “We’re offering more of what you can wear every day. That’s how people are dressing today.”

A vestibule on the second floor serves as a showcase for gifts and home products from Aerin, Dinosaur Designs, Helle Mardahl and Elyse Graham, among others. The second floor also has a seating area where customers can be served coffee or hot chocolate from La Maison du Chocolat. And there are cases for both fine and faux jewelry.

In the back is Murray’s baby: the pre-loved room. Here customers can find a mix of true vintage from brands such as Chanel or Yves Saint Laurent, merchandised with more current merchandise from Tom Ford and Brunello Cucinelli. There are also pre-owned handbags and shoes.

With the exception of the merchandise that had been owned by Murray, who considers herself a true collector of fashion and purchased many of these items at auction over the years — “I look at clothing like artwork,” she said — the other pieces are sold on a true consignment model with the previous owner receiving 50 percent of the purchase price and the store the other 50 percent. Nothing purchased here can be returned, she added, citing precautions because of the pandemic. And in December, Murray will launch a special occasion rental option where anyone who purchases a piece and opts to return it in within seven days will get 75 percent of the original purchase price back as a store credit, and that item will be added to the pre-owned inventory.

Since opening, Murray said she has been surprised that the pre-owned department has been attracting a younger customer than she had anticipated. “All of the younger clients come here,” she said, adding that this provides them with a selection of less pricey but still unique items that also speak to their quest for sustainability. “They feel good about their circular closet,” she said.

In addition, Fivestory has worked with its landlord, the Raphael Collection art gallery, to fill the space with paintings that are also for sale. 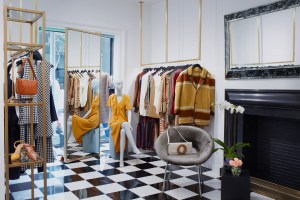 The store offers a curated collection of emerging and well-known designer brands.

Murray has beefed up the team at the store, adding former Barneys merchant Chelsea Sutrisno as buying director, and elevating Carlos Jorge, who started at the store as an intern five years ago, to digital director.

“Claire really had a knack for curating the store,” Murray said, adding that the former owner is now focused on building a healthy snack business. “But Chelsea has a very strong reputation in the industry” and relationships with many of the brands Murray wants for the store.

Sutrisno said that in addition to searching for exclusives and undiscovered brands, she hopes to introduce a private label assortment. “It would be a good addition: comfortable basics at the right price point,” she said.

Digital is also a key focus for Fivestory going forward. “This store is my showplace and I love it, but we’re going to invest in digital to keep the store young and current,” Murray said.

Murray said that Jorge is not only skilled at executing photo shoots and creating content, he also has a “real taste level for new brands.” His primary responsibility will be to grow Fivestory’s e-commerce presence, which is currently around 40 percent of its overall business.

He said his goal is to create a digital experience that is “as luxurious as the store” and is also user-friendly. He’s hoping to create livestreams and activations online and also introduce a click-and-buy option.

During the pandemic, the retailer’s online presence was a lifesaver, Murray said. But so was her decision to open a store in Southampton. “We tested a pop-up on Jobs Lane this summer and sold most of our summer inventory there.” As a result, Murray is finalizing a deal to open a permanent store in the town on Main Street. “My customer is there,” she said. “I know it’s the right place for me.” Also in her plans is Fivestory Palm Beach. “And we’ll see where we go from there,” she said.

Although business levels are not up to Murray’s projections yet, sales are gradually improving and she’s hopeful that will continue. “When we opened at the beginning of July, I sat in the window and asked people to come in,” she said. Then she welcomed customers by appointment only or sent pieces to their homes. When they did come to the store though, Murray said, “No one would go into the dressing rooms. But they’re slowly starting to try things on again. We did more business in the Hamptons in August and September than we did here. But we’re hearing that people are planning to come back by November, so we’re hopeful.”

She also plans to be more aggressive in marketing the new location and services at Fivestory in hopes that customers stop in to buy something new for themselves or gifts for the holidays. “It would have been inappropriate to market before and we don’t want to be insensitive, but people still need a gift,” she said.