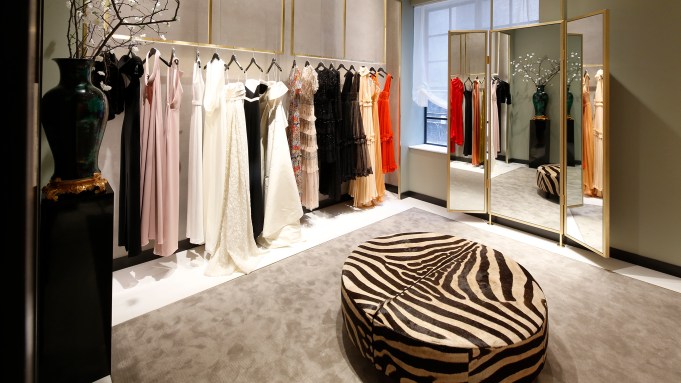 When Fivestory opened in 2012, it might have occurred to co-owner Claire Distenfeld that she would outgrow the store.

The square footage of the town house at 18 East 69th Street, just off Madison Avenue, couldn’t accommodate all the ambitious categories she wanted to include. Ready-to-wear was squeezed a little too tightly on racks, shoes were displayed on a wall, and jewelry shared space with handbags and other accessories.

Fivestory last week expanded, giving Distenfeld an opportunity to maximize the store’s most lucrative products, including shoes. “The [former] shoe garden was a fantastical fairy-tale-like place,” Distenfeld said. “We realized women didn’t want to try on shoes on a marble floor. They said, ‘I wish I could sit down and try shoes on without other people walking by.’ Trying on shoes is very intimate.”

The 1,200-square-foot third floor that Fivestory gained was designated as residential, but Distenfeld convinced the landlord to rent it to her.

“We used marble and stone on the first floor,” Distenfeld said, who worked with interior designer Ryan Korban. “I didn’t want [the shoe salon] to be too masculine or too feminine. My dream in life was to create a silk moire room and I got that in blush pink. I added other feminine elements such as sheer pin-tucked curtains.” Sofas are covered in blush velvet and an Asian fan fabric by Scalamandre.

“Now, with a lot of designers we get exclusives,” Distenfeld said, pointing to Sergio Rossi’s trio of flats under the SR1 line, in gray, yellow and black silk moire with a band of rhinestones. Other only-for-Fivestory items include ballet flats by Tabitha Simmons and Nicholas Kirkwood’s Beya loafers. Fivestory last year introduced sneakers with an opening price of $120, to attract younger shoppers.

The eveningwear room down the hall doesn’t have those egalitarian price points. “The room was also a reaction to customer input,” Distenfeld said. “Before this, the gowns were combined with rtw designs. People come to us for special occasions. We didn’t have enough space. I wanted a room that felt special, like this with the three-way mirror. We do a lot of alterations and a lot of custom things.”

“We designed three dresses with Brandon Maxwell,” Distenfeld said. “That allowed us to dabble in bridal. We designed the gowns with brides in mind.”

Since handbags were relocated, jewelry has accumulated more space, and the buy has expanded by 20 percent, Distenfeld said. Key designers such as Marlo Laz and Lizzie Fortunato continue to perform, she said. During a three-day trip to Florence for “a very fancy wedding,” Distenfeld discovered Anna E Alex’s gold-plated sterling silver, resin and enamel earrings in bold colors, and bought a supply for the store.

“We pride ourselves on our curation,” Distenfeld said, showing off the handbag room. “It’s a cleaner way to show handbags.” And while consumers in department stores may feel like they can’t see everything and they’re missing something, “We want someone to help you.”

Distenfeld is perhaps most excited about a Follain pop-up shop on the fourth floor, a rotating space, bowing next week and operating for three months. “I want to be a lifestyle store,” she said. “When we opened the store [her father, Fred, is cofounder], we didn’t know a single thing about running a retail store. After five and a half years, we’re able to come back to the initial idea of lifestyle.”

Admitting that she’s “not good at beauty and skin care,” Distenfeld is nonetheless “obsessed with it. Follain only sells the best of the best. We wanted an educational and experimental factor. We’re asking consumers to bring their toiletry bags to the store and Follain will evaluate the contents. Having the Follain pop-up allows me to jump into a category I love.” Follain’s brands include Jane Iredale, Amber Blue, True Botanicals and Intelligent Nutrients, among others.

Distenfeld, who has one pop-up under her belt — Kiki de Montparnasse recently finished a run — said she’s talking to nail art experts and meditation studios for the pop-up slot after Follain.

Private label is also percolating at Fivestory, but it’s not the traditional basics most people think of. In fact, Distenfeld’s idea is about as far from traditional as possible. It all started when she went to Morocco last year. Distenfeld bought five caftans from a vendor and left the store. Then, she said to herself, ‘I have to go back.’ She asked the vendor, if he could produce 100 caftans, if necessary. “We made a Fivestory caftan collection and sold more than 200 units,” she said.

“In India, I told a waiter, ‘I need to own your uniform,'” Distenfeld recalled. A discussion with the waiter’s manager ensued. “The manager said, ‘I can tell you where we got the fabric and where we had it sewn,'” said Distenfeld, who ordered tuxedo-style jackets lined with navy silk, silk blouses and long vests.

On a previous trip to India, Distenfeld had silk robes in elaborate prints made up. “I went to a dinner and I saw a woman wearing the robe like a dress,” she said. “I hope private label really grows.”