The retailer, which has a robust U.K. business, is readying an ambitious opening in London.

A rendering of the Flannels Oxford Street flagship

LONDON — With the ongoing struggles and consolidation on the British high street, the retailer Flannels is investing more than 10 million pounds back into Oxford Street and readying the ambitious opening of its first multibrand store in the British capital.

The retailer, which was bought by Sports Direct three years ago, is building on the success it has already achieved across the U.K., with a network of stores in regional markets such as Manchester, Glasgow and Newcastle. It is now looking to raise its profile further in the luxury world.

Flannels made its name offering contemporary and luxury collections in cities without specialty or designer monobrand stores. It also makes a point to open big spaces — averaging 20,000 square feet — in a bid to lure suburbanites living near those cities and give them a reason to shop in a brick-and-mortar space.

The challenge for Flannels now is tempting Londoners, who have a world of fashion and luxury retail at their fingertips.

According to Michael Murray, head of elevation at Flannels, the store has a clear strategy for London that incorporates art, customization, a highly personable service and an overall democratic approach. 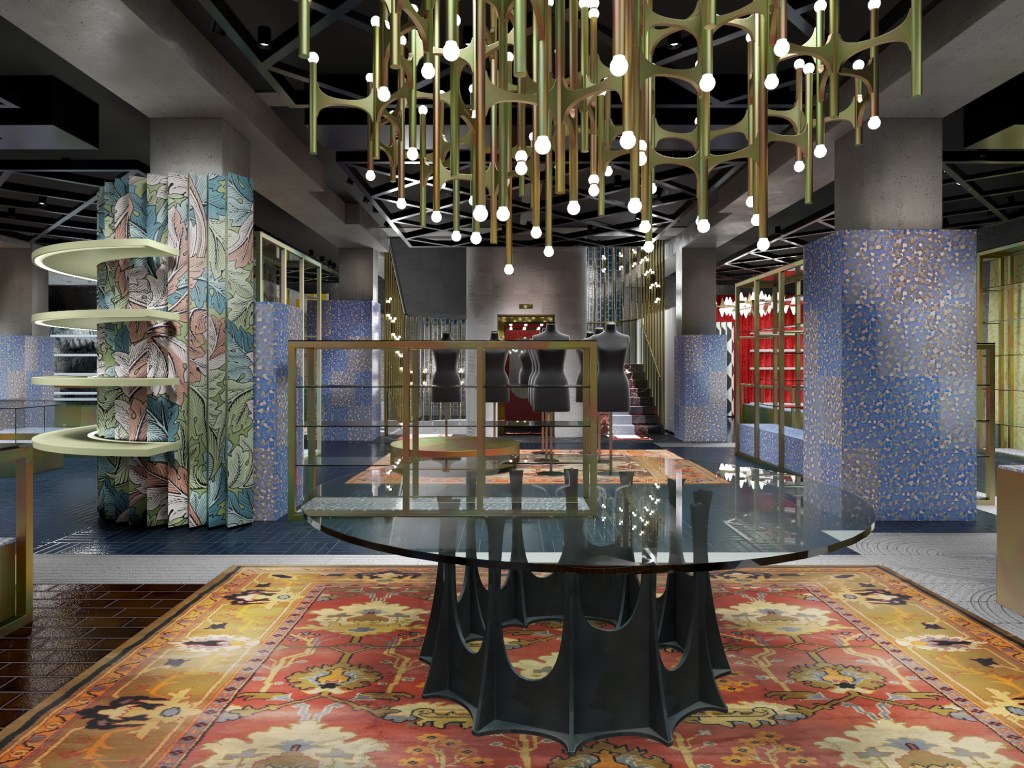 A rendering of the Flannels Oxford Street flagship.  Courtesy Photo

“If you want to be in luxury you need to make a statement in London,” said Murray in an interview, adding that since the retailer was bought by Sports Direct, the company opened an additional office in Soho London, whilst the Shirebrook office continues to be the company’s HQ and house all operations.

It also invested deeply in the Oxford Street opening, which was delayed more than a year to ensure that it’s up to standard.

Designed by the Italian architectural studio P+P, whose previous clients include the likes of Gucci, Tom Ford and Saint Laurent, the store is meant to resemble an art gallery more than a traditional retail space, complete with bronze ceilings, a crystal-like concrete dotted across the walls and bright patterns.

“We were inspired by how art has been translated onto the luxury and street wear markets, so we wanted to connect the two and create a point of difference. It won’t be your typical white walls space, it’s much more industrial with lots of high-quality materials,” said Murray adding that making a design statement on the street was just as important as the store interiors.

“We really wanted to do something with the facade and so we invested over 2 million pounds to install screens in front of the building showcasing artwork. The screens are more highly pixilated than the ones on Piccadilly Circus. We might have a small front door, but there will be this free digital art display on the outside that’s in line with our ethos of making luxury retail inclusive.” 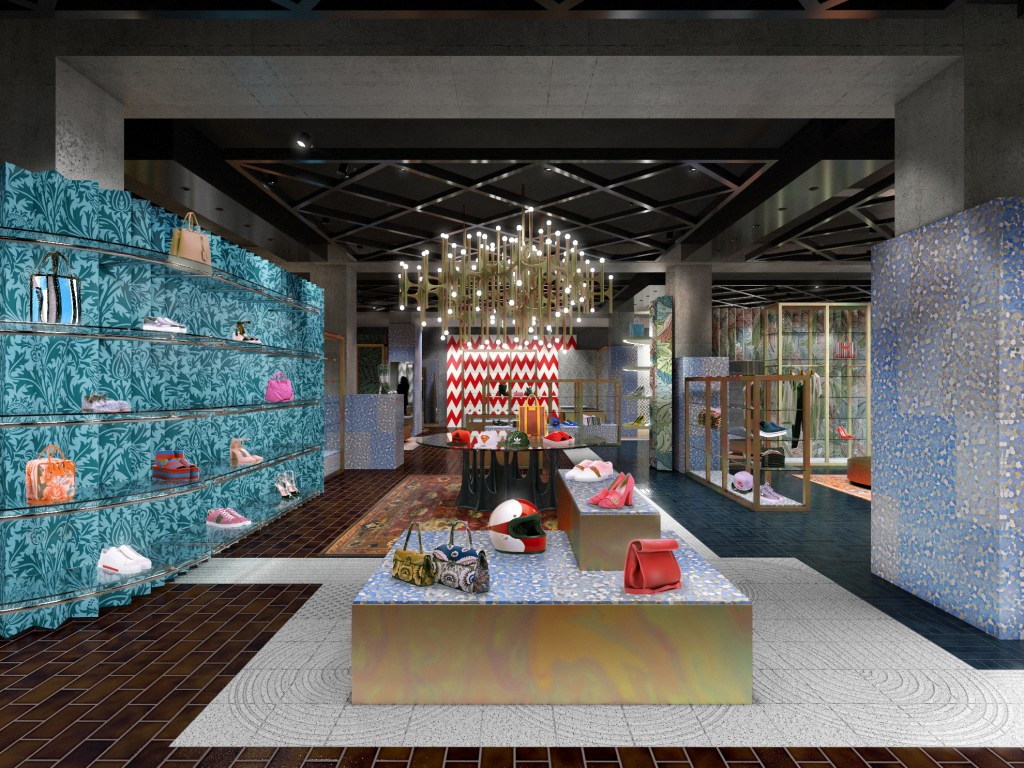 A rendering of the Flannels Oxford Street flagship.  Courtesy Photo

The retailer has joined forces with W1 Curates, a company specializing in digital art exhibitions, to bring works from artists such as Roberta Coni, Mr Brainwash, Kurar and Fin DAC to its store facade.

In terms of the product offering, the retailer doesn’t want to veer too far from its regional demographic, which includes clients aged 18 to 25 years old, hence the focus on entry-level price points.

“The market has changed so much lately that premium and contemporary luxury are even more intertwined,” said Murray, also highlighting the retailer’s focus to offer “rare, bespoke product,” such as customized sneakers and one-of-kind vintage watches with an influencer partner who is yet to be announced.

Off-White, Y3, Canada Goose, Burberry, Gucci and Moncler are some of the brands that will be stocked in the new retail space.

In true Millennial and Gen Z fashion, the shop floors will be merchandised in a gender-neutral, multibrand manner and will always be interchangeable — no branded shop-in-shops here — which will set the store apart from competitors who are already established in the market, Murray said. 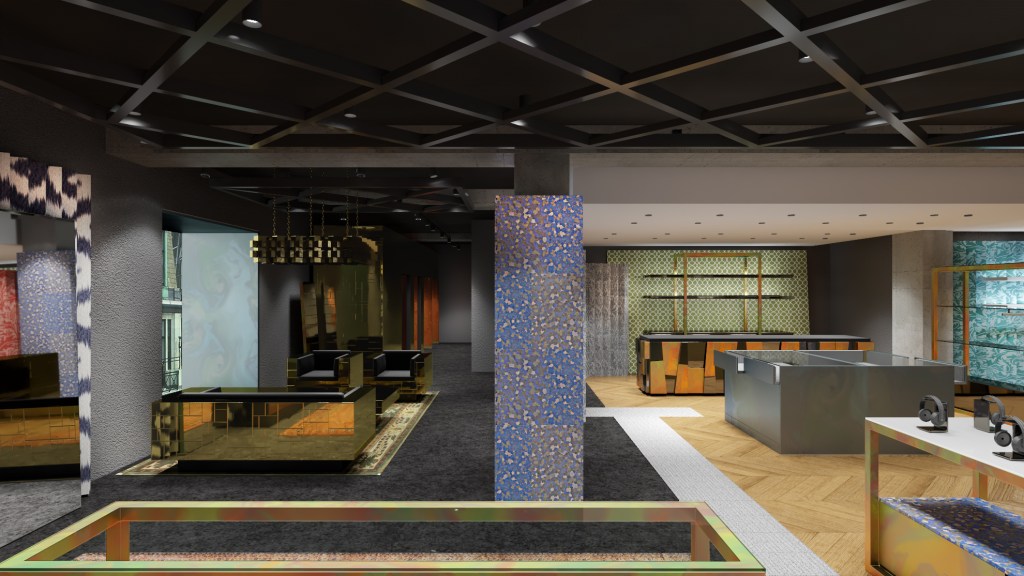 A rendering of the Flannels Oxford Street flagship  Courtesy Photo

To further service this younger demographic, which might not be as comfortable shopping on Bond Street, the company is  putting personalized customer service at the core of its strategy, using the lessons it has been learning from its regional business.

“People get inspired online but they want to buy in-store, so we offer click and collect, which is a service that’s quite new to luxury, but not to the high street,” Murray added.

The service allows customers to receive a WhatsApp message when their purchase is ready to collect and to book an appointment with a stylist who will walk them through the store, show them additional, new products and even offer to make post-shopping restaurant reservations for them.

“We are creating inclusive spaces. Our customers are usually on a first-name basis with store managers,” Murray said.

He added that while the company’s e-commerce platform is ready to “grow at speed and scale” — with a new warehouse in Sheffield in place that employees up to 200 workers — brick-and-mortar retail will remain the focus of the business and the trial of services such as click-and-collect has shown that customers still want to come into stores.

In addition to the Oxford Street flagship, 15 other doors are in the works with the goal of reaching 100 stores across the country.