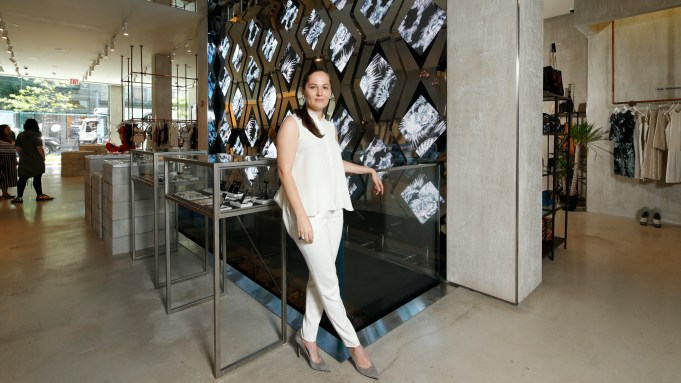 With consumer spending on apparel increasing online, Internet giant Amazon muscling its way into the fashion arena, and unmotivated Millennials and Baby Boomers moving fashion lower on their list of priorities, it would seem to be an inauspicious time to open a new flagship.

Not for Elizabeth Solomeina and Daniel Silverstain. The two are unveiling today a two-level, 7,000-square-foot Flying Solo unit at 434 West Broadway in New York’s SoHo. The space, which is more than three times as large as the original Flying Solo on Mulberry Street in NoLIta, was previously leased by Just Cavalli, which left behind some remnants of its occupancy, including glass stairs embedded with the brand’s signature animal print and a wall of diamond-shaped video screens that flash Just Cavalli patterns.

“Just Cavalli left and we proudly have the store,” Solomeina said, noting that “the designer’s signature is hidden in the patterns on the stairs.”

The name Flying Solo is actually a misnomer. The store was launched a year ago as an organization of designers with a mandate of helping their peers.

“The designers who founded Flying Solo and our investor were all friends at the time,” Solomeina said. “We all had the same problems, and our investor, who has worked with a lot of non-profits, wanted to help and believed in a retail model that would benefit designers.”

At Flying Solo, each featured designer pays the same share of expenses, including rent, electricity and insurance. Designers are required to work at the store one day a week, and if a designer has the skills to do other things, such as managing social media accounts, they’re expected to pitch in.

“We saw from Mulberry Street that it’s working,” Solomeina said. “We figured out we couldn’t have our own store due to the crazy real estate prices. It’s the power of the collective.”

While Flying Solo in NoLIta presented 35 apparel, footwear, accessories and jewelry designers, the size of the flagship and its higher costs requires 68. “The rent is the reason we have so many brands,” Silverstain said. “This is the prime of SoHo.”

Citing the cooperative model, Solomeina claimed that Flying Solo “takes no money from the designers, who get 100 percent of sales. The investors of Flying Solo aren’t focused on profits from designers, but instead, are focused on designers making a profit. That’s why designers only pay for the low cost of space. “They believe in the potential of the Flying Solo model and see applications for streamlining the designer-to-customer relationship in retail and the future potential of having Flying Solo stores with the same innovative model all over the world.”

Working in the store, designers learn “how to be successful retailers,” Solomeina said. “They learn how to manage stock. The retail experience is better for the customer because the designers educate the customer on how to wear their garments. It becomes a more emotional purchase if they get to know the designer.”

With the additional space, Solomeina and Silverstain built a showroom where designers can meet with wholesale buyers. There’s a big focus on editorial credits. “Designers will walk stylists and editors through to the back of the stockroom where we have a wall of fame with magazine covers from Cosmo, Vogue, Elle and Jute,” Silverstain said.

Designer looks hang on copper racks with their names above their products. A square at the front of the store features lingerie and swimwear — the stranger the better. “We rotate designers around the store every week, so it’s equal opportunity, ” said Solomeina, whose jewelry collection features “ugly-shaped pearls I added diamonds to and a square ring covered with pavé diamonds, $6,000.”

“The store has a bit of the industrial vibe from Mulberry Street,” Silverstain said.

Cement blocks near the entrance display fine jewelry, which is out in the open so customers can pick it up and try it on themselves. “We need easy access for customers,” Solomeina explained. “We’re not a museum.”

“We’ve pretty much eliminated the idea of seasons,” said Silverstain, whose namesake collection includes an asymmetric Neoprene coat, $780. “When our customers love something, they should love it forever.”

Flying Solo also goes back to designers’ archives to bring back favorite styles.

Other brands include Elena Rudenko, whose convertible clothing features delicate fasteners that can be detached to turn a dress into a skirt and top; Souk, by an IMG model, features a black silk gown, and Weannabe, whose collection includes a ruffle detail oversized denim jacket, $355, and fringed T-shirt, $175.

A backlit wall at the rear of the store is devoted to footwear, including Vanessa Wu’s vegan leather ankle boots, $119, and Marita Moreno’s trompe l’oeil wedge booties, $365. Another wall showcases handbags such as Kalamarie’s Amelie box in gray leather with croc inserts and gray calf suede, $1,580.

Flying Solo has added another vertical to its web site, Soloists, which include a costume designer, headpiece designer for editorial and music videos, and an artist who makes leather sculptures.

“We believe they deserve the spotlight,” Solomeina said.