The retailer gives fledgling designers a chance to spread their wings.

While bigger players such as Macy’s Inc. are showing signs of strain — the retailer this week announced it will close 28 stores — and Barneys New York is in the throes of liquidation sales, independent downtown retailer Flying Solo is soaring with a new 8,000-square-foot store at 382 West Broadway.

“We ran out of space. We now have 110 brands between the two locations,” said Elizabeth Solomeina, one of Flying Solo’s founders. “This store will have more than 150 brands when everyone moves in. We carry brands from 24 countries.

“It’s kind of crazy how far we’ve come,” Solomeina said, noting that Flying Solo began in 2016 with a temporary store on Mulberry Street in NoLIta, which was followed in 2017 by the unit at 434 West Broadway.

Flying Solo expects to do $3.1 million in sales in 2020, including both stores and an e-commerce site. Solomeina said the location is attracting some new customers, including clients of Gucci, whose store at 374 West Broadway is across the street.

Flying Solo was created by to give young designers a platform for their work after Solomeina and her designer friends had trouble breaking into department and specialty stores. 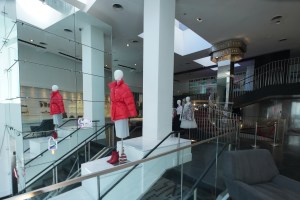 “We all had the same problems,” Solomeina said. “Our investor had worked with a lot of nonprofits, and wanted to help and believed in a retail model that would benefit designers.”

At Flying Solo, each featured designer pays a membership fee, which includes one 50-inch hanging rack in the store, showroom services such as stylist pulls and participation in New York Fashion Week, where the retailer has been staging runway shows at Pier 59 that feature multiple designers and hundreds of looks. Flying Solo is planning to show at the upcoming Paris Fashion Week for the fourth time.

Like everything about the store, participating in the runway show is inclusive. “Anyone can submit an application,” Solomeina said. “A lot of young brands apply and some might not be ready. The criteria is that it has to be something unique and has to represent a different point of view.

“We accept one-offs and limited products,” she added. “We advise them. The challenge for brands from Europe is they don’t understand American sizing, and the same is true to Asian brands.”

Unlike other retailers that want brands to pledge their allegiance to the store, and not sell anywhere else, Solomeina said, “We wouldn’t ask for exclusivity. They’re acting selfishly — that’s just in the interest of the store. Brands finally get the opportunity to have other buyers see them.”

The new store features Vivienne Westwood, United Nude, Coco and Breezy, along with the  up and coming brands. Solomeina said it took her a year to convince both Westwood and United Nude to sell at Flying Solo.

The lower level showroom is divided into four rooms, one for couture labels, two for ready-to-wear, and one for men’s. Mona Lizabeth’s made-to-order, heavily embellished looks were inspired by “Alice in Wonderland,” while Quad, a couture collection from India features intricate embroidery.