The retailer will launch a film and social media platform Friday highlighting the LGBTQ community and people of color.

David Blank is among the influencers featured in the Foot Locker Europe campaign.

Foot Locker is stepping up to the plate when it comes to diversity.

Its European division, Foot Locker Europe, on Friday will unveil “Shoes Don’t Change the World. You Do,” a new advertising campaign and brand platform intended to better connect the company to its core Gen Z consumer base.

The campaign features a diverse cast of what the retailer calls “influential changemakers who are creating and inspiring change within their community.” They include Ashton Attzs, a London-based queer, nonbinary artist; Jade Pearl, an abstract artist, illustrator and model; Marvin Bonheur, a French photographer; David Blank, a self-described “fierce, black, fearless, queer and feminist” artist, and Muriel Elisa De Gennaro, a leader in the Italian LGBTQ community. 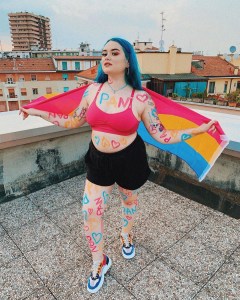 Muriel Elisa De Gennaro is part of the cast in the Foot Locker video.

“It is an acknowledgement that while shoes don’t change the world, they give people the confidence to be themselves; and that is where the change starts,’’ said Carmen Seman, vice president of marketing for Foot Locker Europe.

The campaign includes a video that will launch across Foot Locker’s social and digital platforms as well as in select stores. It will be used throughout the summer and beyond and will include other changemakers as well, the company said.

Susie Kuhn, vice president and general manager for Foot Locker in Europe, said the launch “represents a key moment for Foot Locker in Europe. This isn’t just another brand anthem for us, this is a bold and transparent commitment to enable long-term change. As Foot Locker, we are already in partnership with today’s youth and they will drive the change, but we will offer them the assets, access and resources to support their confidence to do it. Our launch film, featuring a host of inspirational creators, is our rallying cry. The world is calling out for change and we want to be a part of it by lending our platform to these voices. We’re committed to be their ally for achieving real progress.”

The platform follows Foot Locker’s previously announced $200 million commitment to serve the Black community through economic development and education. The new platform is an acknowledgment that today’s youth are seeking change to help reshape the future for the better.

The campaign was created by AnalogFolk Amsterdam. According to Carren O’Keefe, executive creative director, the launch film makes “a bold statement around the brand’s belief in Gen Z’s power to change the world and do so through their own eyes and their own content. But this is just the beginning. We can’t wait to further help the brand partner with the youth to create a better world — something that aligns to AnalogFolk’s mission of using digital to make the analog world better.”