The flagship that Forever 21 will open in Times Square Friday represents the scope of the retailer’s $100 million-plus ambitions. 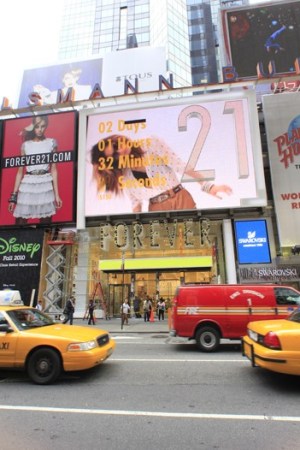 NEW YORK — The four-level, 91,257-square-foot flagship that Forever 21 will open in Times Square Friday represents the scope of the retailer’s $100 million-plus ambitions in Manhattan.

That’s the sales projection for the store in the first year, said founder and chief executive officer Don Chang.

“The Times Square store will be more productive because we’ll have a lot of traffic and more time,” he said, referencing the fact that the store at 1540 Broadway will be open from 8 a.m. to 2 a.m. It also will have 151 fitting rooms, 32 cash registers and 500 employees.

New York City icons are celebrated throughout the flagship, either faithfully executed or reinterpreted. A genuine yellow taxi cab on the third lower level has been tagged by a graffiti artist. Mannequins sit on the hood and roof surrounded by Forever 21 signs spelled out in Broadway lights. Different mannequins can be found throughout the store. Some are faceless, some headless and some are remarkably realistic with delicate features and softly colored hair.

On the first lower level, accessories are sold from white carts with pink stripes with mannequins dressed as street vendors hovering nearby. Love 21, a contemporary collection, is displayed in an environment meant to evoke a New York apartment with shelving, windows with peach drapes and a dozen different lamp shades hanging throughout. Scaffolding — a ubiquitous New York sight — is used as a design element in the store, and yellow police “caution” tape is used judiciously. “We even brought in a real graffiti artist to add a little artistic grit throughout the store,” said Esther Chang, visual manager and the 23-year-old daughter of Forever 21 founder Don.

Turns on fashion and visual displays will be fast. “The merchandise will change daily,” said Don. “The Times Square store will go through merchandise faster and the visual aspect will change faster.” The store will be closed for six hours every day, just enough time to make the switches, said Linda Chang, senior marketing manager and Don’s 28-year-old daughter.

On the main floor, which has 26-foot ceilings, a wall of mother-of-pearl-colored paillettes shimmers above the main cash wrap and a glowing Forever 21 logo. The flagship has elements of retail as theater. An LED screen box at the entrance offers a bit of red-carpet magic: As consumers walk beneath the screen, sensors trigger bulbs that flash like those of a paparazzo.

To make the massive store less intimidating, Esther developed store-within-a-store concepts for Forever 21’s various brands. Each concept shop has its own glass vitrine dedicated to a neighborhood in Manhattan and Williamsburg, Brooklyn. Inside, mannequins are dressed in styles indicative of each area. For SoHo, two chic mannequins sit beside a cafe table surrounded by shopping bags. A display case near 21 Men, the fast-growing men’s collection, reads Meatpacking District and models wear vintage clothing, while hanging scales and exposed brick bring the neighborhood to mind. “Men’s doesn’t go to every store,” said Linda. “We’re having an inventory issue because we’re selling out of it so quickly.”

There’s a wood tree house in HTG 1981, the kids’ area, along with glass jars filled with gum balls, crayons, marbles and baseballs. Books on display include “The Sky’s The Limit” and, incongruously, a psychology primer. Lingerie is displayed in a setting with lavender walls, cabbage rose wallpaper, a wrought-iron bed, crystal chandeliers and white-and-gold chairs. “Le Chic est Facile,” reads the back wall of the dress shop, hung with mirrors in distressed frames. A teal tank dress with ruffle trim is $27.80; a sleeveless gray dress with an embroidered tulle overlay, $24.80, and a coral dress with beading, $27.80. There’s a full shoe department on the third lower level, but styles are interspersed within the brands, such as a chinoiserie-print platform pump with a bow in dresses, $25. Specials highlighted in the store include $9.50 for tight stretch jeans and $3.50 for camis.

A giant handbag with a gold chain, a huge lipstick and compact herald cosmetics and accessories on the first lower level.

The Stud Room on the third lower level was conceived for Times Square by Esther and features apparel with studs. Walls are covered with 3,000 gold studs. “My favorite [room] to design was the gold-studded room, which is unique to the Times Square location,” Esther said. “Not only is it a personal reflection of my style, but also of the direction of where Forever 21 is heading.”

Forever 21 is trying to expand its reach beyond the teens and tweens with whom it has long been associated. Collections such as the contemporary Love 21 “has more sophisticated styles and more modest cuts compared to our other lines,” said Don. “Love 21 is great for women who work. But it’s not just age. We have many styles for 24- or even 40-year-olds. We are not just for the teen market. We provide styles for anyone who wants to feel trendy.”

“A couple of research reports we have access to say that 40 percent of our customer base is over 25 years old,” said Linda.

Forever 21 last year purchased at auction leases to 13 former Mervyns and 14 former Gottschalks locations for its large-format stores. “We are always looking for better locations and bigger boxes,” Don said, adding the retailer still has plenty of room to grow in the U.S. “We have close to 500 stores. We think we can have 1,000.”

Part of Forever 21’s success comes from its ability to tailor assortments to local communities. “When we do allocations of merchandise, we’ll send trendier items to the Times Square store,” said Linda. “We don’t carry the same merchandise at each store.”

The retailer’s seasonal collections include Twist, the next incarnation of which will feature an updated, modern Minnie Mouse through a collaboration with Disney. “It’s not for every customer,” Linda said of Twist. “Minnie Mouse is an iconic character. We love her femininity and love giving her a real twist.”

Forever 21 is dabbling with designer collaborations. Brian Lichtenberg, known for his crime-scene tape design for Lady Gaga’s “Telephone” video, designed a series of graphic T-shirts for Forever 21, bowing in August. “We don’t have a specific plan,” Linda said of designer hookups. “We went with an L.A.-based designer who felt stylistically similar to us. We’re definitely open to everything.”

Don said the Times Square store should help accelerate the pace of Forever 21’s global expansion by exposing international shoppers to the brand. The retailer, which has opened stores in Japan, South Korea and China, plans to unveil its first European stores this year in Framingham in the U.K. and Dublin. Units will open next year in London, Paris and Madrid or Barcelona.

In fact, Don is looking for growth anywhere and everywhere. “We’re still looking for acquisitions — any opportunity that interests me,” he said. “I’m still hungry.”