Retailer presented its holographic fashion show to media as a curtain raiser for its first store in the city, a 51,000-square-foot unit opening next year. 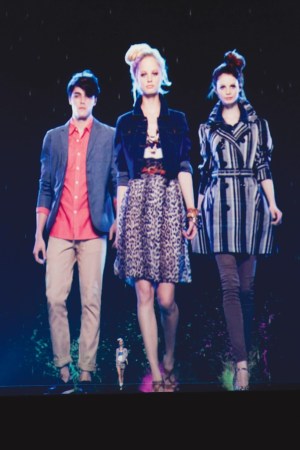 The show, which was presented to local media, was a curtain raiser for the company’s first store opening in Hong Kong, slated for early next year. Forever 21 is preparing to open a 51,000-square-foot unit in Causeway Bay, one of the city’s busiest shopping districts.

“It will be one of our largest storefronts worldwide,” said Larry Meyer, Forever 21’s executive vice president, who was at the event.

The megastore will take up four stories in the Capitol Centre, a six story building that was formerly home to Hong Kong-based apparel retailer Giordano. The monthly rent for the store will come be $11 million Hong Kong dollars, or $1.4 million.

Forever 21 is also planning to open similarly megasized stores in Beijing and Shanghai next year.

Linda Chang, senior marketing manager, said the company has been preparing to enter the greater China market for four years. Forever 21 currently has two stores in Japan and two in South Korea.

“We tested the markets there and with the really great response we’ve gotten we feel like we’re prepared now to enter China. It’s such a huge market we wanted to make sure that we didn’t just enter it haphazardly. We wanted to do our research and find the right location,” she said.

Chang, who arrived in Hong Kong only two hours before the fashion show, said she’d be staying here for a couple days to check out progress on the store. The store will offer all of Forever 21’s subbrands, such as Heritage 1981, Love 21 Contemporary plus men’s and kids lines.

“As we enter, we’re going to keep a close eye on things. That’s what our strength is. We respond very quickly to what the customers in each demographic area respond to. What we’ve found historically opening in international countries, what has worked in the U.S. for the past 27 years really does work everywhere else. The age demographic is very wide — from young pre-teens to grandmothers,” she said.

Chang said the company isn’t planning on designing apparel specifically for the greater China market, though “we will be tailoring some of the styles according to what we think will be appropriate to the market.”

She also said that pricing would be comparable to prices in the U.S., noting that in the U.K., the company keeps prices comparable, despite the 20 percent value-added tax by sacrificing some of its profit margin.

Chang, Meyer and other Forever 21 executives mingled a bit with the local Hong Kong media after the 20 minute fashion show, which replaced real live models with 3-D video images.

Forever 21’s upcoming store opening in Hong Kong comes as a number of global retailers are finding their way to the market. The Gap is planning a store opening in the city’s Central district later this month while Abercrombie & Fitch will be opening a store down the street in the historic Pedder Building bumping out Shanghai Tang, which had been in that spot for 17 years.