More than 1,500 line up to get into the chain's first store in Japan. 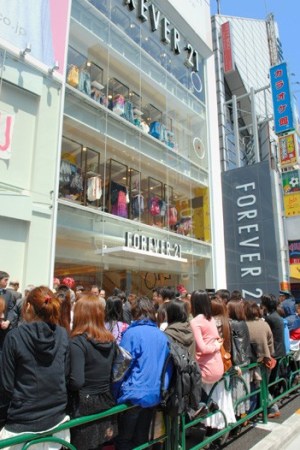 TOKYO — The opening of Forever 21’s first store in Japan on Wednesday was as much the exercise in organized chaos as it promised to be, possibly even more so since it happened to fall on a national holiday. The first customers started lining up outside the store in Tokyo’s Harajuku district from around 11:30pm Tuesday.

About 15 minutes before the ribbon-cutting ceremony, the crowd was estimated at 1,500 people. Even though people here are quick to form lines outside new boutiques, that’s still a good showing. More than 2,000 lined up for the November opening of H&M ‘s Harajuku store, coinciding with the launch of its special Comme des Garçons collection.

Fumito Okuyama and Kazuko Nakahara, both stylists at a hair salon, camped out on the sidewalk starting Wednesday night, staving off hunger with burgers from McDonald’s and rice balls from a nearby convenience store. They read about the opening in Japanese fashion magazines such as Blenda and Vivi, and decided the low prices would be worth the long wait.

“I like shopping for cute clothes at new stores, especially when they’re very cheap,” remarked Nakahara. Junior high school students Maki Watanabe and Moe Kurihara took the first train in to Tokyo from the suburb of Saitama, arriving in line before 6am. When they saw on TV that the opening would be on a national holiday, they were excited that they’d be able to queue up and snag some cheap dresses.

About 30 minutes after the 11am  opening time, the cash registers were backed up and there were far more customers entering the store than there were leaving. Those who waited on the street for hours were rewarded with a free t-shirt and pair of flip flops, as well as cans of Red Bull to perk them up. The orderly lines outside quickly turned into mayhem inside—a mannequin even toppled over and created a stir as a shopper tried to snag the skirt it was wearing.

One of the first customers out of the store, office worker Masumi Kato, bought three dresses and a selection of cheap earrings and other accessories. “The prices were even cheaper than I thought they would be,” she said.

Takenori Suganuma, a 25-year-old interior decorator, arrived just before 9am and still came away with a plain t-shirt and a zip-up jersey hoodie. Suganuma had never heard of Forever 21 until he received an email blast from one of the Japanese PR companies helping to promote the brand in Japan. “The clothes looked decent and the prices were unbelievable, so I decided to come down and check it out,” he said.