As summer vacation gets under way for most students, retailers are trying to entice them into stores to purchase their back-to-school wardrobes.

By Liza Casabona and Meredith Derby on June 29, 2005
View Slideshow 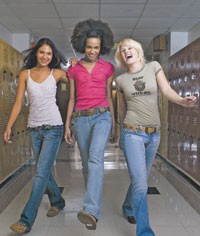 NEW YORK — Summer vacation just started for most students nationwide, but many specialty and department stores already want them to think about going back to school.

And they’re putting the merchandise out to lure them in. Some retailers will start rolling out their back-to-school assortments officially this Friday, while some items already have trickled into stores in order to get even earlier reads on the all-important season. It’s all part of the attempt to lengthen the back-to-school selling season as well as increase third-quarter sales and profits.

The strategy is catching on in part because early summer sell-through can give retailers a good indication of the merchandise mix and colors that will sell well during late summer and early fall, when the b-t-s season really kicks in. That, in effect, takes some of the gamble out of picking the right reorders to arrive for the traditional early- to mid-August b-t-s selling season.

Admittedly, the majority of the merchandise set in July is clothing that immediately can be worn; analysts call it “wear-now,” referring to such items as shorts, T-shirts, camis and polos. Yet the early b-t-s strategy also enables retailers to test heavier apparel items such as fleece and track jackets for sell-through.

“To the extent that you can react to the season, you can get some reads early and maybe get back into things that work later on in the season if you can move that quickly,” Tubin said.

Dana Telsey of Bear, Stearns & Co. said in a June 24 research report that bohemian looks, “new takes on preppy favorites” and darker colors “should provide a breath of fresh air from a product-newness perspective” during the b-t-s season. Retailers clearly hope those fashion touches will encourage consumers, perhaps bored of markdowns on summer merchandise, to open their wallets once again.

Denim is expected to be another big driver of sales during this b-t-s season, despite recent fears among some in the Wall Street analyst community regarding a “denim glut.” Denim is “driving everyone’s business now and price points are going up and there doesn’t seem to be any resistance,” said Tubin.

These days, it’s not just the specialty retailers who are setting b-t-s assortments early, though.

“In my world, nobody else sets as early as J.C. Penney, and arguably, they’ve probably been doing the best in apparel,” said Deborah Weinswig, managing director of U.S. equity research at Citigroup Smith Barney, who covers only the department and discount sectors. Penney’s, Weinswig noted, also is putting out b-t-s merchandise on Friday; the company set b-t-s items early last year, as well.

One of Penney’s main competitors, Kohl’s, also will set its first b-t-s assortment relatively early, in mid-July, said Weinswig. Department stores will generally set b-t-s merchandise twice this summer, she noted, with one set being transitional to see which merchandise to reorder.

“A lot of the other retailers in my world have followed Penney’s from that perspective because they did it last year and they gained so much mindshare. It was a pretty significant positive,” she said. “Department stores are doing a much better job of thinking like specialty retailers, which, in the past, certainly hasn’t been their forte.”

Indeed, it’s the specialty retailers who set the trend for setting early b-t-s assortments. Most are currently in the midst of promotions to clear summer inventory in order to make room for the transitional b-t-s and fall merchandise.

At “tween” retailer Too Inc., for instance, the first b-t-s assortment will be set in the first week of July, Tubin noted. Gap Inc.’s Old Navy division plans to launch its b-t-s sets on July 17, roughly two weeks before last year’s July 29 launch, and Urban Outfitters said it will set the majority of its b-t-s merchandise on July 10. At Abercrombie & Fitch, a preview of b-t-s merchandise, which was much larger than last year’s preview, was set in all stores the second week of June, according to a spokesman. This weekend, full b-t-s assortments will be placed in the company’s stores chain-wide, the same timing as last year.

And at the Gap, the first b-t-s assortment will be set around mid-July even as analysts worry that the company is losing its market share as a denim destination. Analysts are already worried that strong promotions taken before the set of its b-t-s merchandise could negatively impact second-quarter earnings.

For its part, Aeropostale is setting the first of its three b-t-s merchandise sets on July 10, one week earlier than last year. The first assortment, which the company calls a “summer” b-t-s set, will focus on wear-now apparel, though not swimsuits. The second b-t-s assortment will be set on Aug. 7. A final set on Sept. 12 will focus more on fall seasonal apparel, which Finazzo said will offer heavier items such as tracksuits and hoodies.

Aeropostale plans to have a bigger assortment of apparel for this b-t-s season than it did last year, Finazzo said, including an expanded denim section as well as twill bottoms.

Thanks in part to this month’s promotional environment, more seasonal weather and pent-up demand from soft sales in April and May, June sales are looking solid, analysts say. And that bodes well for the overall b-t-s season, in contrast with a year ago.

Mike Niemira, director of research at the ICSC, said that, according to his estimates, b-t-s sales totaled roughly $22.1 billion from August and September 2004, an increase of 0.9 percent over the same period of 2003. Niemira includes family clothing, shoe, computer and book stores in his calculation.

It is difficult to isolate specific segments of the retail sector, he said, because “it’s not clear how much is back-to-school and how much is back-to-work, which is a growing part of the story.” B-t-s is also a big window of time, Niemira said, because school systems nationwide start at varying points during the summer. Statewide tax-free shopping holidays also can help determine when retailers will launch b-t-s assortments.

Holly Guthrie, senior vice president at Morgan Keegan & Co., who follows the specialty retail sector, is calling for an aggregate 3 to 4 percent increase in b-t-s revenues over last year.

Yet, while setting b-t-s assortments in early July isn’t hugely surprising in these days of increasing competition for the consumer dollar, a longer selling window for b-t-s branded goods doesn’t necessarily mean that retailers will be able to significantly boost their total b-t-s sales. Guthrie said she’s not convinced a longer b-t-s selling season will definitely translate into more dollars spent by each shopper. Many teens, she added, will probably wait to see what their peers are wearing when school starts before spending too much on summer b-t-s apparel.

Spending by teens on personal electronics such as iPods and high-powered speakers for their dorm rooms also could offset the total amounts they will spend on b-t-s apparel.

For his part, Tubin thinks retailers who provide their customers with more choices could see an increase in the total amount spent over the b-t-s season. “If you can set your first back-to-school assortment in the beginning of July and you can kind of flow newness week by week or every other week or something like that, then I think you can give the customer more choices and more reasons to spend money,” he said.

Another potential downside, Weinswig noted, is that with crude oil futures recently hitting a new high of $60 per gallon, consumers could continue to worry about their discretionary incomes. Should gas prices continue an upward climb, consumers could panic and hold off buying any new clothes, which could lead to markdowns, deteriorated gross margins and lagging profits for retailers.

In addition, a very hot summer can hurt early b-t-s sets. “It’s going to be hot in July and the assortment is going to be wear-now to a certain extent. But no one’s going to want to be thinking ‘I’ll buy clothes for back-to-school in July’ just because the assortment is set,” said Tubin. “I already hear the excuses [from retailers]: ‘It’s too hot.'”