Fossil has introduced a new retail design that plays up the brand’s Americana image and puts more emphasis on clothing. 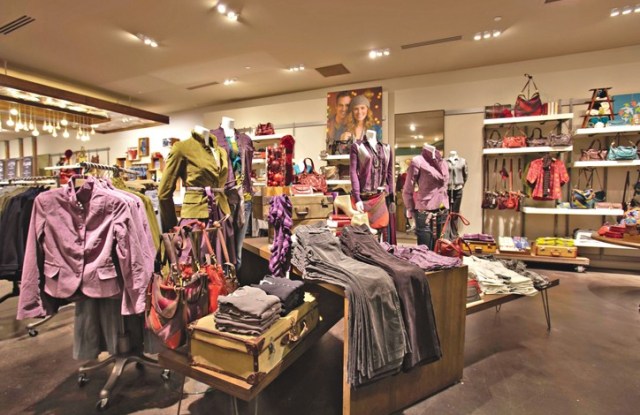 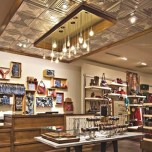 Fossil has introduced a new retail design that plays up the brand’s Americana image and puts more focus on clothing.

“We felt like we needed to figure out how to showcase both clothing and accessories at the same level, and past concepts didn’t do that,” said Jill Elliott, vice president and creative director. “We’re so excited to have the complete head-to-toe story.”

The watchmaker, which has been opening stores rapidly and now counts 360 worldwide, cited strength in direct sales for the quarter ended Oct. 3, when comp store sales rose 6.4 percent, but net sales fell 6.9 percent to $381.4 million.

Of Fossil’s 124 U.S. stores, 91 are accessory stores and 33 have both accessories and clothing. Next year, clothing will be added to Fossil’s unit at Covent Garden in London after a renovation and to a new store in Stuttgart, Germany, she added.

The new decor debuted Oct. 30 with the renovation of Fossil’s 3,600-square-foot unit at Stonebriar Centre in Frisco, Tex. — a busy mall about 15 miles from Fossil’s headquarters in Richardson, Tex. The company, which targets men and women ages 25 to 35, plans to evaluate the unit’s performance after the holidays and decide whether to expand the concept in the second quarter, Elliott said.

“We’re watching it every day, and so far it’s had a great response from consumers and internally that yes, this is the right direction that we want to move,” Elliott said.

Located on a prominent corner near the center of the mall, the store is full of period American fixtures and luggage that show their age, like weathered wooden steamer trunks and paint-chipped industrial metal carts. Many of the pieces were used in warehouses in the Twenties and Thirties, while a sturdy iron coat and book rack is truly old school. A few elements, including the pressed tin ceiling over the cash wrap and the backlit wall displays of watches and sunglasses, are similar to other Fossil stores.

“We are rooted in vintage and like to juxtapose modern against that,” Elliott explained. “We have brought in touches of industrial lighting and some found metal fixtures. The new design not only shows the clothing really well, but the accessories just jump off the shelf. We have a lot more hanging bags.”

Clothing, handbags, accessories and shoes are scattered throughout the store rather than in departments, and clothing comprises 58 percent of the mix versus half in other units. To give the selection more character and reference the vintage origins of its fall and holiday styles, the company hand embellished a small group of vintage plaid flannel shirts, olive wool military jackets and distressed denim shorts specifically for the new store.

“We think it makes the vintage-inspired product so much more authentic because you understand where it came from,” Elliott explained.

Working at company headquarters, Fossil designers added studs, stitching, buttons, satin belts and other trims to the 30 one-of-a kind pieces at the Stonebriar store. They pounded an old typewriter to write comments on hangtags and stained the paper with tea.

“You keep finding all these little details, something our design team is really excellent at,” Elliott said. “They are so into the interior details, whether printed lining in a peacoat or quirky details on the inside pocket of a pair of jeans. We are excited about those pieces and will be going forward with that. We’re looking for pieces that we can modify and put in the store.”

The customized items are priced about 20 percent higher than Fossil’s clothing, which retails from $24 for a T-shirt to $228 for a coat.

Fossil, which does a large wholesale business with department stores, has operated accessories stores for 18 years and clothing units for 10. Elements of the new decor will show up next year in the remodeled unit in London and the new store in Stuttgart.

“We’ve set it up in a way we can play with it,” Elliott explained. “We’re talking about how we can roll it out and maintain visual standards consistently across the chain. Fossil has such creative talent. This has a lot of exciting interesting things but is definitely scalable and in a model that we can roll out.”