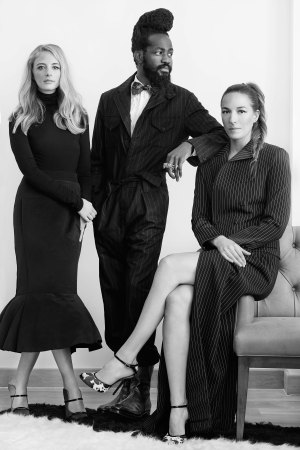 LONDON — Having rapidly built the luxury footwear business Malone Souliers, Roy Luwolt and Mary Alice Malone want to share the pleasure — and pain — of their own experience with other emerging talents. Today, the duo will unveil 151Luwolt, an e-commerce platform that aims to thrust young labels under the spotlight.

Luwolt and Malone plan to recruit, mentor and sell under-the-radar brands that may still be too small to promote themselves or to manufacture and fulfill the sort of orders that big retailers, online and offline, demand.

The two are asking for little — designers do not have to produce anything new for the site, but will rely on existing inventory instead — and are promising much in terms of sell-through, marketing and public relations support in return.

“We want to make sure these talents around the world do not go ‘unfound,’ and we have the resources to make sure of that,” said Luwolt during an interview with Malone at the Malone Souliers showroom on Albemarle Street in Mayfair here. He described the site as a kind of Kickstarter.com for fashion.

Malone said: “What we want to tell customers is this: ‘Come to the site and discover these brands. Get in before they get big.’” She added that big retailers nowadays also tend to “buy safe,” while 151Luwolt will encourage designers to put their most risky items out there for the world to see — and, hopefully, buy.

The two have tapped Cleo Davis-Urman, the cofounder and creative director of the now-defunct Tinker Tailor, and former design brand manager and editor of Moda Operandi, as head of fashion.

Particularly expensive and one-off items, or those that have proven to be top performers on the site, will be sold at full-market retail price in a bracket known as Luwolt.

The site launches today with 15 ready-to-wear names from 10 countries including Saudi Arabia, the U.S., Spain and Ukraine. Labels include Polite, by Carlos Polite, a Colombian-Spanish designer; Spain’s Moises Nieto, and Hul Arnold, designed by the New York duo Bopha Hul and Troy Arnold.

There is also the Ukrainian designer Anna October; British duo Catherine Teatum and Rob Jones, who design under the name Teatum Jones, and Roberta Einer, the Estonian designer who launched her label earlier this year.

Luwolt and Malone said they don’t want their designers to invest in new production — at least at the start. What they’re asking designers to do is to give them unsold stock, one-off and archive pieces — and even college thesis collections.

Designers will own their stock, and 151Luwolt will keep it in a U.S.-based warehouse, and fulfill all the orders. For every sale made, the designer will get half the money — and be paid immediately — while the rest will go to 151Luwolt. Luwolt said the plan is to re-invest some of that money back into the designers’ businesses.

He and Malone also plan to share the site’s primary data with designers, letting them know information such as where in the world their items are selling best, and what sort of customer is buying.

“We really want to help the designers understand what, exactly, consumers want from them, and then assist them with brand development, strategy and supply chain,” said Malone, adding that it’s difficult for any designer to see themselves from a consumer’s point of view.

She and Luwolt said they want to impart their own experience building Malone Souliers to these growing businesses. Both founders had strong backgrounds in business: Malone is an artist and former furniture designer who operated her own store in the U.S., while Luwolt is a serial entrepreneur with expertise in market and product research. They launched Malone Souliers in February 2014, and today it sells at stores including Bergdorf Goodman, Saks Fifth Avenue, Nordstrom, Le Bon Marché, Galeries Lafayette and Matchesfashion.com.

On the 151Luwolt site itself, consumers will be able to sort by price and by product, and the founders’ aim is to introduce new names every two weeks. While 151Luwolt will launch with 15 names, Luwolt and Malone said there will be no cap on the eventual number of designers. They will, however, limit the volumes to about 25 to 40 items per designer.

Davis-Urman said her role has so far been to hunt for designers, and offer them a platform on which to tell their story.

“The site is less about the commercial and more about storytelling. It’s a launching pad for designers, and they can use our site as their own,” she said.