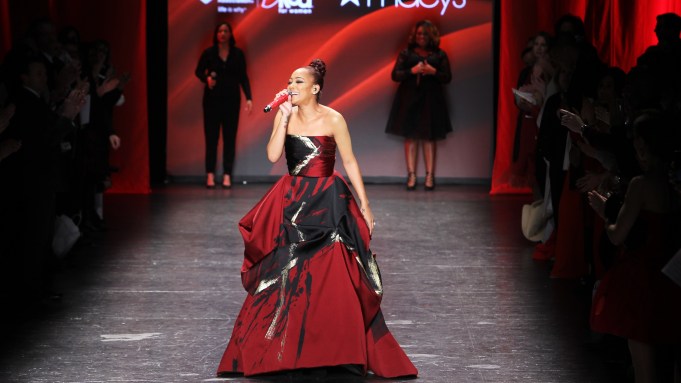 NEW YORK — There were no megamodels — there was a Gigi, but not that one — and no Kardashian kin, but the American Heart Association’s Go Red For Women Red Dress Collection had a strong message and the populist appeal of watching nonfashion professionals take the runway at Skylight Moynihan and make it their own.

It could safely be said that the event had the widest age range of any show during fashion week, from Maisy Stella of “Nashville,” 12, to Florence Henderson of “The Brady Bunch,” age 81.

Most of the walkers on Thursday evening broke cardinal rule No. 1 of catwalking: Don’t make eye contact with the audience. They also transgressed rule No. 2: Don’t smile.

Fran Drescher, wearing a burgundy Le Petite Robe by Chiara Boni dress, hammed it up, playing a ditzy but charming character — sound familiar? Stumbling onto the runway, she pulled a clip out of her hair and powdered her face. Then she reached into her handbag and pulled out a plush heart, which she held to her chest and thumped expressively.

Henderson, in Pamella Roland, received thunderous applause as she sashayed down the runway to “Lady in Red,” stopping to run her hands over her body suggestively. When it was Misty Copeland’s turn, the American Ballet Theater principal dancer’s impeccable posture was apparent. She made only the slightest concession to her craft, however, doing a small twirl, and continued walking.

Other women pumped their fists into the air, raised their arms, bowed to the photographers’ pit and vamped.

Social media personality Gigi Gorgeous, wearing a Laurel DeWitt red-and-gold chain-mail gown cut dangerously low in the front and back, balanced a huge metal Statue of Liberty-like crown festooned with roses. “It’s really heavy,” she said before the event, adding that her neck felt like it would break.

Ta’ Rhonda Jones, the actress and rapper who plays Porsha Taylor on “Empire,” had the difficult task of walking in a creation by Conrad Booker, a member of Macy’s Design Incubator. Booker used products found at Staples. The bodice was made of paper cording and the long fishtail skirt was constructed of drinking straws. Jones hobbled down the runway looking like a red dinosaur. Backstage, she could be seen lifting off the contraption with a sigh of relief.

The event ended with Monica, wearing a crimson gown with black and gold brush strokes, a bustle and a train. After taking her turn down the runway, Monica sang Jackie DeShannon’s “Put a Little Love in Your Heart.”

Prior to the show, Martine Reardon, chief marketing officer at Macy’s, the presenting sponsor of Go Red for the third year in a row, said the retailer is focusing its incubator program in San Francisco, Chicago and Philadelphia. The designs are “going into stores in some ways,” she said, adding that participants have free reign “to design whatever they want.”

Asked whether Macy’s next quarterly earnings will be improved, chairman and chief executive officer Terry Lundgren said, “I’m not talking about business tonight.”

“I like this event because we’re bringing awareness to women,” said Lundgren, who sat in the front row, tapping his foot to the music occasionally and squeezing the hand of his wife, Tina. “They are our customers and they’re affected by this disease in a very significant way.”

That point was hammered home by A.J. Calloway, of “Extra,” who ticked off some statistics at the start of the show. “One in every three women will die of heart disease or stroke,” he said. “Founding national sponsor Macy’s has raised $55 million and is helping to save 255 lives every day.”

Some of the participants had a personal connection to heart disease and others simply wanted to help spread the word. “Rosie [O’Donnell] is one of my best friends and she had a heart attack,” said Drescher, name-checking Barbra Streisand who “invited me to lunch to talk about this.” Drescher said she is developing a new TV series for herself, working on a Broadway musical and hoping to direct a film.

“I spoke about [cardiovascular disease] years ago to Congress,” said Marilu Henner, who wore Escada. “Women see the gynecologist and get the ‘bikini’ treatment, but nobody talks about the heart.” Henner said her 10th book, coming out in April, is about how she helped her husband beat cancer twice. “He’s my third and final husband,” she said.

Vanna White, wearing Lee-Lim, another Macy’s incubator designer, said, “My mom in the Seventies was a huge supporter of the American Heart Association.” White, who is in her 33rd year on “Wheel of Fortune,” said, “I have my own yarn line, Vanna’s Choice. I’m a big crocheter. Now that I’m an empty-nester I might think of designing fashion.”

Tamron Hall of “The Today Show” and “MSNBC” said her Marc Bower dress was kismet. “It was one of those rare moments when you try on something and you have a soul mate in fashion,” said Hall who is be covering the election.