The company doubled its business last year during the pandemic.

Frances Valentine, the lifestyle brand cofounded by Elyce Arons, has seen an upswing in business during the pandemic, both in its own freestanding stores and its web site.

“We fared really well. As far as our employees and staff, everybody was healthy and good, and our business was incredible. Our business grew by two times last year,” said Arons.

The brand, known for its brightly colored caftans, dresses, tops, sandals, baskets and home goods, clicked with customers looking for a pick-me-up during the pandemic. 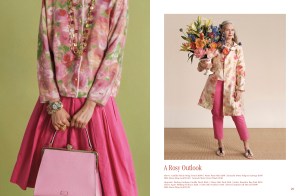 Some looks from Frances Valentine’s May catalogue.  courtesy shot.

“People were really looking for something to lift their spirits during such a sad time. Our product is very joyful and really happy. When you walk into one of our stores, I want people to want everything. It’s like walking into a candy store,” said Arons, who cofounded Kate Spade with the late Kate Spade, Andy Spade and Pamela Bell in 1994. They sold the brand in 1999 to Neiman Marcus Group, which eventually sold it to Liz Claiborne Inc. It is now part of Tapestry Inc.

Frances Valentine’s direct-to-consumer business (website and freestanding stores) accounts for over 95 percent of the revenues, up from 70 percent in 2019. The brand has stores on Madison Avenue, and in Sag Harbor, N.Y., and Palm Beach.

In February, Frances Valentine moved into a permanent location on Madison Avenue and 73rd Street  after having a pop-up on Madison and 67th Street. “It’s been gangbusters,” she said.

According to Arons, the company is doing particularly well with its apparel offerings, which account for 50 percent of the business. Handbags generate 25 percent, and jewelry and footwear 25 percent. Arons expects that handbags will start to make a comeback and close in on apparel. “In 2020, nobody was buying handbags,” she said.

While the company started out selling handbags and footwear, it added a few apparel pieces such as caftans and cardigan sweaters and customers kept asking for more, said Arons. “I really love vintage pieces and I’ve always been a vintage shopper,” she said, adding that she and Kate Spade used to go vintage shopping together all the time when they were undergraduates at the University of Kansas. 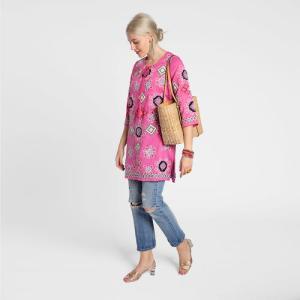 The original caftan they did was one of “Katie’s favorite pieces” from their travels. Arons said they would pull vintage things out of their closets and remake them, adding pockets or a zipper where they needed to be modern. Sweaters are their strongest category, and they have added pants.

The line is designed by a team. “Half of the team are veterans of our old days,” said Arons. Zonda Sochorow, head of product, works alongside Arons on the product development and production of shoes, apparel and handbags. Sochorow, who joined Frances Valentine in November 2015, worked at Kate Spade from 1999 to 2008.

Arons said she’s eager to open more stores, particularly in Texas (Dallas and Houston), Atlanta, Charlotte, Charleston and California. “I’ve been itching to get on a plane to visit some retail locations,” she said. Trunk shows have done particularly well in areas such as Greenwich, Conn., Houston and Dallas. Today, Frances Valentine’s best markets are California, New York, Texas and Florida, she said. Typically, Frances Valentine stores are about 1,000 square feet.

Since 2017, the company has been digitally focused and that’s what’s been driving the business through the pandemic. They launched their web site in February 2016, and originally thought it would account for 50 percent of the business, with wholesale the remainder. “The web site took over that. Wholesale hasn’t done quite as well over the years,” she admitted. She has since cut back the brand’s wholesale distribution, especially during the pandemic when many specialty stores closed. Today, they sell primarily to Nordstrom and some specialty stores.

Among the handbags that are doing well are the baskets. “We sold so many baskets in February and March and had to place reorders,” said Arons, pointing to the brand’s wicker hand basket done in several colors and retailing for $298. 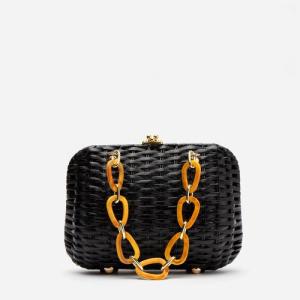 Last spring, Frances Valentine launched a catalogue. “It’s been an incredible marketing tool for us,” said Arons. They sent it out to 125,000 customers last June, and it has increased from there. They published two more catalogues, in September and November, and have a 36-page one coming out in May. “If people can’t get into a store and can’t have access to it, the photography and our creative really lends itself to this type of print,” said Arons. 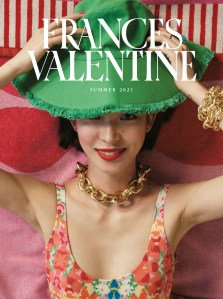 The company has dabbled in home products, launching tablecloths, cocktail napkins, wicker pieces for outdoor dining in the summer, and throw pillows.

Asked whom she considers her target customer, Arons said, “Someone who wants to be surprised all the time and just come in and enjoy themselves. Sometimes you just want to walk into a store and be made happy,” she said.

Frances Valentine merchandise retails from $198 to $698, with the average price point being $398. The company manufactures in such places as Peru, India and Asia. They’re looking for more locations in the U.S. and Mexico. 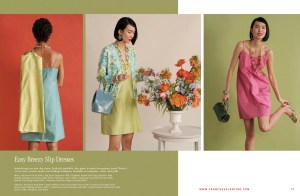 Some looks from Frances Valentine’s May catalog.  courtesy shot.

Arons noted that jewelry and footwear also have performed strongly. They’ve already practically sold out of a lot of their summer sandals. The company has collaborated this spring with Bella Bliss for children’s clothing. It has also done collaborations with Sea Star Beachwear for neoprene espadrilles, and Cover Star for swimwear and sun pieces. 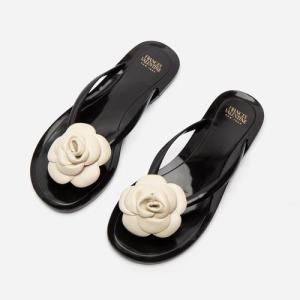 As far as new business opportunities, Arons said they’ve had a lot of requests for a fragrance, but that’s down the road. She said for now, they don’t want to grow too fast and want to focus on what they do well.