The retailer was often called "the godfather of Rodeo Drive."

By Lorna Koski
with contributions from Khanh T.L. Tran
on April 14, 2016
View Slideshow 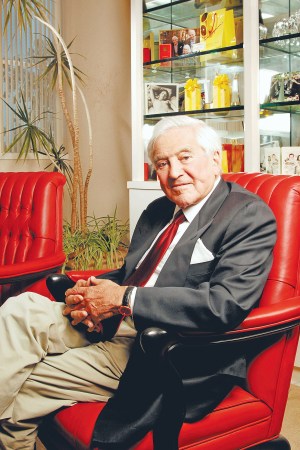 Fred Hayman, former owner of the Giorgio Beverly Hills store and its best-selling fragrance that came to signify the Power Eighties with both designer excess and even headier scent, died Thursday at age 90 after a long illness.

Giorgio Beverly Hills on Rodeo Drive epitomized the Reagan years, with its yellow-and-white striped awning, bar, pool table and cappuccino machine — then an American novelty. Hayman, who was often called “the godfather of Rodeo Drive,” brought to retail a sense of showmanship and focus on service, both of which he learned while working at hotels and restaurants, and created a store whose fame extended far beyond Rodeo Drive. The scents he subsequently launched were so strong that they also could be smelled from afar — and lingered for hours.

In November 1961, Hayman, then a banquet manager at the Beverly Hilton Hotel, lent $12,000 to George Grant — who owned a shop called Giorgio on Rodeo Drive and Dayton Way in Beverly Hills — becoming a silent partner in the business. It was Grant who came up with the store’s signature yellow-and-white awning stripes and chandelier. By 1964, Hayman was the sole owner of the boutique. In 1966, he married the former Gale Miller, whom he had originally hired as a waitress at the Beverly Hilton. It was his third marriage and her second, and it would prove to be a relationship made in retail — though not necessarily romantic — heaven.

“I am very saddened to hear this news,” says former wife, Gale Hayman, who recalled the days when the couple built the store and its namesake fragrance. “I had wonderful memories of building Giorgio together. He was a great marketer.” She noted how Hayman brought the sensibility and cache of being a restauranteur, in providing coffee and snacks to give husbands a chance to relax while their wives shopped for high-priced fashion.

Hayman was born on May 29, 1925, in St. Gallen, east of Zurich, Switzerland, to Richard Pollag and the former Irma Levy. The family moved to Paris, then the U.S. The young Hayman worked in the kitchen of the Waldorf Astoria, then went into the Navy during World War II, a stint he spent Stateside as a dentist-in-training. When the war ended, he spent time in Paris and Mexico on the G.I. Bill before returning to the Waldorf. In 1954, he went west to become the banquet manager at the Beverly Hilton, which hosted the Golden Globe Awards and the Academy Awards dinner. Before long, he was also running other concessions at the hotel, including the hat check and the florist. He had three children — Charles, Robert and Nicole — from his second marriage, to former nursing student Barbara Sziraki. He was fired by the Hilton, then became general manager of The Ambassador Hotel. He launched three restaurants, all of which failed.

But Hayman still had his interest in Giorgio, the Beverly Hills store. He felt that the shop’s proximity to the Beverly Hilton could help make it a destination. When he and Gale took over the running of the boutique, they were retail neophytes but soon learned the ropes and invented a few new twists of their own. They installed a pool table and a bar that served drinks and cappuccino to men who were waiting for their shopping women. Packages were delivered in a 1955 Rolls Royce.

WWD wrote about the couple in 1986, “The Haymans were so unfamiliar with retailing that when they wrote their first orders they made Xs on the order sheets instead of writing in quantities. However, they learned quickly. Articulate and charming, Fred made a superb salesman, and his flair and tasteful flamboyance carried over into promotion and advertising. His hotel and restaurant training was useful as the store built a reputation on service and unusual glamour dressing. He would write thank you notes to customers almost daily.”

In 1976, a period of financial uncertainty, Hayman told WWD, “During difficult times, people switch to quality — they’re less frivolous — they’ll buy expensive clothes — that’s why a high-priced store like ours has benefited by the economy. We’re heavy with Chloé for spring and Balestra, plus John Anthony’s bugle beaded dresses at $2,000. I’d never buy a $900 knit dress that looks like it could be knocked off in a bonded knit for $80. We have everything from Zandra Rhodes to Thea Porter to Halston. Our strength is in the $400 to $500 price range.”

To land in the boutique was a coup for designers. “I remember walking into Giorgio Beverly Hills with my Vuitton suitcase full of jersey dresses,” said Diane von Furstenberg. “He gave me an order of 100 silk long dresses. Ali MacGraw, Candice Bergen and Rita Hayworth bought them. I was very proud.”

Added Judith Leiber: “Fred Hayman was a great innovative merchant in so many ways, and he had marvelous taste. He had pool tables in his shop for the men to play pool while their wives spent all their money. This was just brilliant.”

Hayman also believed that stores often misjudge their customers. “A woman in a nurse’s uniform and sneakers might buy a $2,500 dress,” he said. “You never know. We had the daughter of the Shah of Iran come in here one winter, barefoot and in shorts.”

The store inspired Judith Krantz’s 1978 novel “Scruples” and the cast of the Eighties TV series “Dynasty” shopped there.

The Haymans began throwing parties for designers new to Giorgio Beverly Hills, too — something that Bloomingdale’s and Neiman Marcus were doing at the time, but a gambit that was then unusual for a boutique. In 1977, Fred launched a group of Rodeo Drive retailers to promote their location. “Once Armani started, it was a given,” he once recalled.   “Then Hermès, and I knew it was going to be the street.”

The Haymans separated in 1978, but they continued to work together for years. Their store had expanded and they began thinking about a fragrance. Gale sniffed samples for two years, until one evening, when she was trying to take home a bottle of an entrant from Florasynth, it broke. The scent it exuded created such a reaction that it became clear that this was what they’d been looking for. Giorgio, the fragrance, was launched in 1981, first in the boutique, and later in Bloomingdale’s. In 1985, Giorgio the fragrance had sales of $100 million at wholesale. One of their most-copied marketing ideas was the scent strip, a perfume drenched card inserted into glossy magazines — a concept that became ubiquitous in the industry. Hayman added a premium men’s cologne, Giorgio V.I.P. Special Reserve, to the lineup in 1987.

David Horner worked side by side with the Haymans in creating Giorgio. “To me, the whole thing was a group of people who did something entrepreneurial that had never been done and yet to be equaled — we did $200 million in retail sales in one year, selling a $35 product. We did $100 million with department stores alone,” Horner said.

When asked Hayman’s contributions, Horner replied, “Fred understood the importance of taking care of the customer.”

He recalled taking a direct mail letter into Hayman for him to sign with a red marker. Hayman accidentally smudged the red ink, then he remarked, “People will think I sent it to them personally.”

Horner recalled, “It was amazing how many people thought he did.”

He attributed Hayman’s laser focus on personal service from his career training as an innkeeper. “As large as the company got,” Horner recalled, “he inspired us to keep in touch, one to one, with the [retail] customers.”

The Haymans’ divorce was finalized in 1983, giving each member of the couple a 49 percent interest in the store, with Fred also controlling a 2 percent trust in it, which gave him a controlling interest. In early 1985, Gale was ousted from the store and she responded by filing a $75 million lawsuit against the company the next year, amending it later to try to prevent her former husband from getting his $5 million salary. In 1987, under pressure from the lawsuits, Hayman sold the Giorgio fragrances to Avon Products for $165 million and changed the name of the shop to Fred Hayman Beverly Hills. The store closed in 1998.

His involvement in Beverly Hills and Rodeo Drive wasn’t over, however. In 2003, Hayman hatched the notion of the Rodeo Drive Walk of Style, an annual award recognizing a designer or figure in the fashion world. In 2011, he became the 15th person to receive the award. He also became the namesake for a street in Beverly Hills: Fred Hayman Place.

Certainly, Hayman was a fixture in the affluent city. When he spent five years working on a biography with writer Rose Apodaca, the two met almost every Wednesday at his neighborhood canteen, Spago, where he always sat at “his” table, in the corner in the patio.

“He was like the mayor there, with everyone coming up to the table to greet him with a handshake or kiss,” recalled Apodaca, formerly West Coast bureau chief for WWD.

Published in 2011, their 8-pound tome was titled “The Extraordinary Difference,” after Hayman’s explanation for his key to success. Hayman told her it was all based on “striving that much more to achieve the extraordinary difference.”

Others who stepped into Giorgio in the Eighties remembered him as a ringmaster of a bygone era in fashion and retail.

“Clients didn’t just shop at Giorgio; they communed there,” said Cameron Silver, founder of vintage boutique Decades and fashion director for H by Halston and H Halston. “It was a time when celebrities still bought clothing, socials didn’t expect a discount and everyone wanted to smell like Giorgio Beverly Hills.”

Silver said he first fell in love with luxury retail when he went to Giorgio as a precocious tween.

“Hayman curated the ultimate walk-in closet-cum-fashion salon that 25 years later would ultimately inspire Decades,” he said. “To this day, I am always thrilled when a vintage Halston, Sant’ Angelo or Thea Porter comes to Decades with a Giorgio store tag because I know it’s the best of the best.”

Hayman is survived by his wife, Betty; sons Charles and Robert; daughter Nicole, and 10 grandchildren. A memorial is being planned. In lieu of flowers, donations may be sent to Children’s Hospital Los Angeles and Homes for Our Troops California.