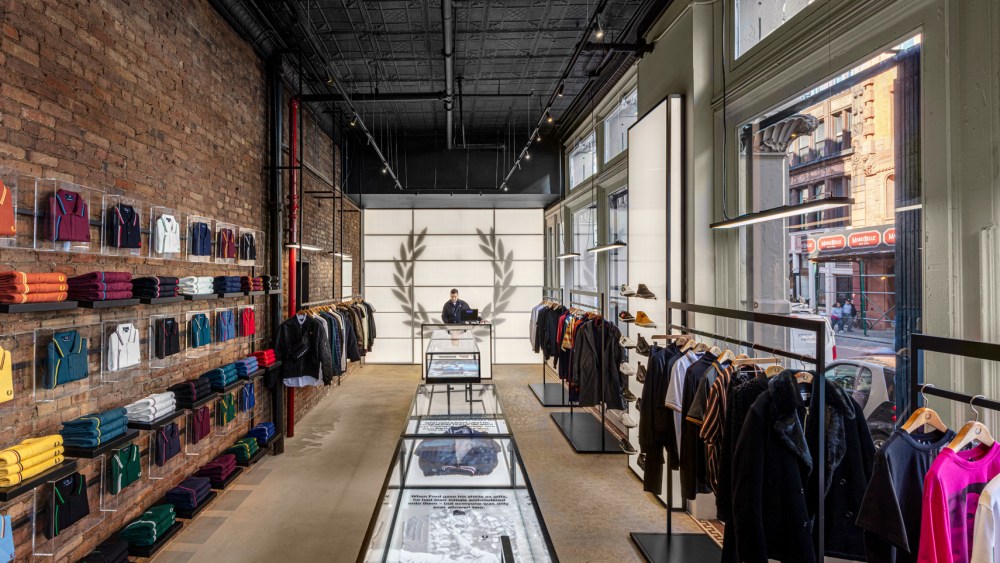 Fred Perry has set down new roots in SoHo.

The British brand known for its laurel wreath logo on Friday night opened the doors to its new North American flagship, an 11,000-square-foot store at 483 Broome Street. This replaces a 1,350-square-foot store that was located nearby at Greene and Prince Streets. Although smaller, the store is a bright corner unit with a bank of windows.

This is only Fred Perry’s third store in the U.S., joining units in Brooklyn and Boston. There is also a shop in Toronto. The brand is also carried at Bloomingdale’s and specialty stores including Opening Ceremony, the Webster and Need Supply Co.

Globally, the company owns and operates 30 stores in the U.K. and has franchised or licensed shops in Asia, South America and elsewhere in Europe. The brand, which dates back to 1952, is owned by Tokyo-based Hit Union, which purchased it in 1995. It is named for the British tennis and table tennis champion and is best known for its short-sleeve pique polo shirt with the laurel wreath logo.

That logo is highly visible in the new space. It fills the back of the store embedded in a corrugated white laminate. “That’s our flag in the sand,” said Matthew Moore, head of brand for Fred Perry.

The unit had been an antiques store in the past and is located in a landmark building. In reimagining the space, the brand was careful to retain the integrity of the site, including exposed brick walls and a window with an iron frame.

Moore said the company’s “intention was to have a North American flagship and we were just waiting for the right building to come up.”

He said the character of the space is similar to the brand with its “juxtaposition of rough and smooth,” so when “amazing features” like the window were discovered during the renovation, they were celebrated. “Many brands may have covered it up, but we embraced it. We want to be part of the store, not dominate it,” Moore said.

The center of the space has an archive cabinet celebrating the history of the brand housed in a vintage American case. It focuses on Perry’s impact in America and includes old photos of Billie Jean King wearing a Fred Perry skirt, and a shirt with Perry’s initials under the laurel, a rare honor that was awarded by the company to very few people, including John F. Kennedy and King.

“The story for us for the New York store opening is the three-initial honor,” Moore said.

In addition to the archival displays, the store showcases a wide variety of the polo shirts in a range of colors as well as its collaboration products with Raf Simons, Miles Kane and the Amy Winehouse Foundation.

The store will celebrate its popularity in the subculture by bringing in emerging and established artists and musical acts to the store including The Specials, Peggy Gou, Puma Blue, Black Midi and Jarvis Cocker.

“Fred Perry has been part of the subcultural uniform since the Fifties, and the laurel wreath remains a signature of both individuality and of belonging,” said Richard Gilmore, managing director of Fred Perry. “We’re excited to open a space where everyone is invited to experience the true sense of the brand, and what it has meant to people; from elite sportsmen through to fringe subcultures.

”While Fred Perry is a niche brand, we are a global brand, with over 250 shops around the world, 25 of which have opened this year. Currently, although the U.S. store footprint is small, it is our second biggest audience on social media — so we know the emotional connection to the brand and what we represent is present and growing.”

He said the brand “remains a signature of both individuality and of belonging. Our shops are spaces that tell our brand and product stories via collaboration, live music, exhibitions — a real opportunity to reconnect with our diverse, global tribe together and celebrate the neighborhood.
Newsletters