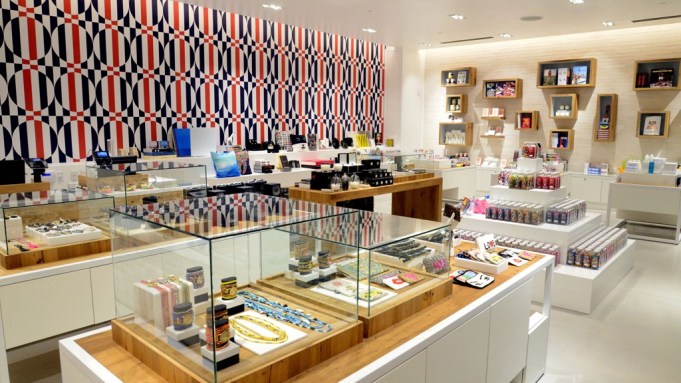 LAS VEGAS — In a city where one-upmanship has become second nature, Fred Segal is preparing to take retail to the next level.

The 53-year-old Southern California retailer on Saturday night will open the doors to a 10,000-square-foot “retail experience” at the new SLS Las Vegas hotel here. Not only is this the company’s first move outside its home state, it also marks the first time a single brand will occupy the entire retail space in a major resort hotel.

“The stores are all mixed in and intertwined with the hotel,” said Paul Blum, chief executive officer of Fred Segal. “You can walk from a restaurant to the casino to the pool and then to a store. The way the shops are positioned architecturally puts us into the flow of the hotel. It’s a unique experience.”

The resort was designed by Gensler Architects in collaboration with Philippe Starck. It will have more than 1,600 guest rooms and suites in three towers and a collection of restaurants and nightclubs, including Bazaar Meat by José Andrés; Katsuya by Starck; Cleo; Umami Burger and The Griddle Cafe. There will also be a Ciel Spa. It’s on the site of the old Sahara hotel on the famed Las Vegas Strip.

But what sets the hotel apart was the choice to partner with one merchant for all of its retail offerings instead of leasing space to a variety of stores.

Called The Fred Segal Collective, the retail experience offers seven individual stores covering a range of categories, including She, He, Jeans, Shoes, Jewels, Play and Goods. This translates into separate women’s and men’s collection sportswear and accessories stores, unisex denim, a women’s footwear store and the company’s first foray into fine jewelry. Goods will feature an assortment of gifts and housewares, while Play will dabble in souvenirs and adult-themed novelties, such as racy lingerie. “It’s Vegas, you have to have one of those,” Blum said with a laugh.

There will also be a sundries shop that will not be bannered under the Fred Segal name, but the retailer was instrumental in its setup.

Blum said of the assortment: “It’s a Vegas experience in a lot of ways, but mashed up.”

During a walk-through of the new retail space, Danielle de Marne, vice president of merchandising for Fred Segal, said each of the assortments was carefully chosen and edited to highlight up-and-coming designer brands.

Upon entering from the Las Vegas Boulevard, or Strip, entrance, shoppers will see two large vitrines on both sides that read “Welcome to Fred Segal” and “Fred Segal Loves You,” with a big heart in place of the word “loves.” “We’re really part of the property,” de Marne said.

The women’s store is located to the left of the main entrance and offers a mix of contemporary and emerging brands including Jonathan Simkhai, RTA, Haute Hippie and Zimmermann. There are a lot of dresses, leather pants and jackets and the assortment is skewed to dressier styles, or “something you’d want to wear in Vegas,” she said. Other labels include Bailey 44, Ramy Brook and June furs.

The large assortment of accessories includes sunglasses from brands ranging from Tom Ford to Thierry Lasry, clutches from Ashlyn’d, hats from Eugenia Kim, and a collection of jewelry.

The rear of the store offers seating areas and oversize dressing rooms so customers can relax.

Across the way is He, which offers a mix of “elevated basics” for men — suits from Moods of Norway, sportswear from Billy Reid and jeans from BLK DNM. Other labels include Eleven Paris, Circle of Gentlemen, Todd Snyder, Bread & Boxers and Happy Socks. Robert Graham and Eton shirts are part of the mix, as are Zanerobe joggers.

De Marne said that although the individual stores are not large, averaging just over 1,000 square feet each, the edited assortment allows the retailer “to really tell a story and make it feel like a happening.” She added the stores are “meant to be fluid,” and the mix will change constantly.

The Jewels store, which was still under construction during the walk-through, will showcase jewelry “as a collection in a contemporary way,” de Marne said, and will include pieces such as ear cuffs and hand jewelry.

Shoes offers women’s-only models — skewed toward “trendy, going-out heels” — and includes brands such as Alejandro Ingelmo, Schutz, Diane von Furstenberg and Rachel Zoe. “They’re more of the up-and-coming designers, and not as mainstream as a Jimmy Choo or Manolo [Blahnik],” she said. The store also includes a sprinkling of handbags from Hunting Seasons and others.

The Play store, which is smaller than the others, is designed “like a little boudoir,” de Marne said. The mix of lingerie from Fleur du Mal and Love Haus was chosen to be “playful.” Although there are a few leather bustiers, there are also cosmetics and scents to create a more-romantic aesthetic.

Finally, Jeans is where the company showcases its more casual offerings for both men and women, with a comprehensive assortment of jeans, T-shirts, swimwear and sweats. Among the offerings for women are Current/Elliott, Elyse Walker, Paige, Frame and McGuire. In men’s, Alex Mill, Onia, Fidelity, AG, Levi’s Made and Crafted, Asbury Park and others are carried. The denim store is located inside the Paradise Street entrance and there are another two vitrines there for the Jeans and Goods stores. “We’re anchoring all the main entrances,” she said.

“I’ve been a loyal fan and customer of Fred Segal for years,” said Sam Nazarian, founder, ceo and chairman of SBE, the global hospitality and entertainment company that owns SLS. “Partnering with them to bring one of L.A.’s most iconic brands to SLS Las Vegas is something I’m very proud of. Together, we’ve created a truly original retail experience for Vegas locals and visitors.”

Acknowledging that is “an enormous statement,” Blum said this is the first of several retail experiences the company will be opening around the world.

Fred Segal was founded in Santa Monica, Calif., in 1961 and became known as an industry leader for ferreting out new and noteworthy apparel and beauty brands. In 2012, it was acquired by Sandow, a privately held company with holdings in media, global materials consultancy and creative management. Earlier this year, Sandow partnered with equity investor Evolution Media Partners, an entertainment media and sports merchant bank formed in partnership with Creative Artists Agency; TPG Growth, the middle-market and growth equity investment platform of global investment firm TPG, and Participant Media, the global entertainment company founded by Jeff Skoll in 2004. Sandow took on Evolution as a partner to fund the rollout of up to 10 Fred Segal lifestyle centers in the U.S. and abroad over the next five to seven years.

In March, another cluster of stores will open in Tokyo in three buildings in a converted railway site at 13 Daikanyama-cho Shibuya-ku. This will mark the company’s first international location. Like the SLS location, these stores will sell luxury men’s and women’s apparel, accessories, and home and lifestyle merchandise. There will also be a spa and café.

Admitting that the choice to open its first retail experience in Vegas was made before he joined the company, Blum said he nonetheless supports it. “I think it’s great,” he said. “We have a great merchant team and they did a really terrific job. The stores will look great.”

He declined to reveal potential sites for other Fred Segal retail experiences, but said the company is “looking at other locations now. We want the Vegas stores to happen first and then our next phase will be to open in lifestyle centers like Tokyo. SLS is one of a kind.”

While he’s mum on where those locations might be, he knows they will have to be welcoming to this new retail concept, which includes food and wellness offerings in addition to traditional apparel and accessories. “Food is a fun form of retailing,” he said. “And food and fashion today are so intertwined.

“My theory is that people don’t want to just shop anymore. If we were to turn Fred Segal into a conventional retailer, how big a mistake would that be,” said Blum, whose background includes stints as ceo of Juicy Couture, David Yurman and Kenneth Cole Productions. “I’ve spent almost 30 years developing retail in conventional ways — in malls or street locations. But we’re looking at this with an outside-the-box perspective.”