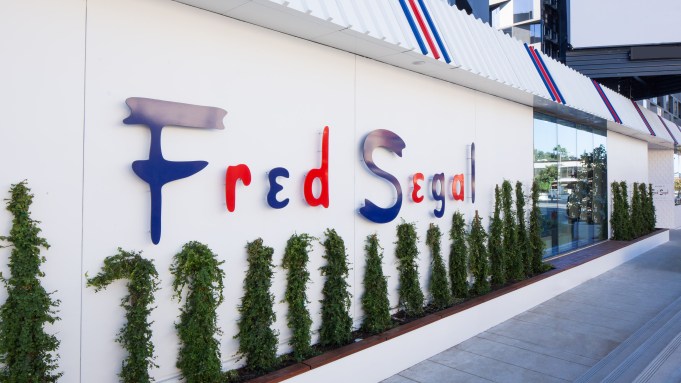 Fred Segal takes the wraps off its West Hollywood flagship this week as the legendary retailer looks to begin a new chapter.

The company — which fashioned a name for itself curating emerging brands from an assortment of merchants under a single roof — will unveil its first Los Angeles area door since the 2013 opening of its space at Los Angeles International Airport’s Tom Bradley International Terminal.

“For us to launch a new store, it’s our first store in over 30 years,” said chief executive officer Allison Samek. “For us, this is the biggest return to the brand and we’re just really excited about being able to show who we are in the best way possible.”

“I spent 11 years working at the Fred Segal center on Melrose and I was able to see how the brand touched people,” Samek said. “It’s exciting to be able to take it to the next level in a new location.”

The executive was on hand at the end of last week, along with Fred Segal president John Frierson, to give WWD a tour of the 22,000-square-foot space as construction crews and merchandising teams began assembling the various shops-in-shop spaces. The 13,000 square feet of retail opens this week, with Tesse by restaurateur Bill Chait set to bow at the end of November and space slotted for a gym to be revealed at a later date.

It’s a plethora of moving parts under the Fred Segal roof, consisting of multibrand retailers and single-brand shops-in-shops, in addition to pop-ups. The roster of businesses with space when the store bows this week includes CAP Beauty, the CFDA, Eggy, Esquivel, Double RL, Levi’s, Libertine, Suzanne Rae and LTH JKT, among others.

“We’re excited to have the CFDA here because we really want to support American fashion designers,” Frierson said. “It’s a great way to tap into L.A. and they can always have product that’s actually on sale here.”

The 1,400-square-foot Levi’s pop-up will include exclusive product and a macramé installation aimed at symbolizing a deconstructed pair of Levi’s. The denim maker’s pop-up will be followed by New Era, Domino Media and Interscope Records.

Samek and Frierson characterized the arrangements between Fred Segal and the various brands taking space as partnerships when asked if real estate is being subleased, which is how the operation originally ran under founder Fred Segal.

“It’s a partnership kind of deal,” Frierson said. “We’re not just a landlord.”

“It’s more of a hybrid approach,” Samek added. “We’re more partners in the business with them.”

New York-based Sandow Media acquired the worldwide rights to the Fred Segal name in 2012 and later brought on Evolution Media, which was founded by TPG Growth, Participant Media and Creative Artists Agency. The deal at the time was seen as indicative of a move to propel the brand beyond its Los Angeles roots and take its iconic red, white, and blue-striped awnings and ivy-covered walls to a national and international stage.

Fred Segal-branded product across multiple categories was described to WWD in 2012 at the time of the deal, with the company trying its hand at a contemporary line called Fred by Fred Segal last year. It’s no longer producing that collection, a spokeswoman confirmed, and is instead debuting a Fred Segal Originals men’s and women’s line, which Samek described as the next iteration of what was started last year.

“This is the next generation,” she said. “It’s our Fred Segal product for our stores.”

The collection, Frierson added, is California-inspired. The lineup of denim, T-shirts, cashmere sweaters and leather jackets retails from $75 to $700.

While strides have been made abroad to open stores, where there are now three doors in Japan, the road domestically includes the opening and subsequent closing of a store at the SLS Hotel in Las Vegas in 2015, closure of the company’s Santa Monica store last year, sell off of the building housing the original location on Melrose Avenue, also in 2016, and original plans to build a flagship in Playa Vista, which were later scrapped in favor of the Sunset flagship.

The Melrose location remains at the center of a trademark infringement and unfair competition lawsuit Sandow and Fred Segal LLC brought against new building owner CormackHill LP in a lawsuit filed last fall. The purpose: have the Fred Segal signage removed from the building. Interpretation of the contract related to the transfer of rights between the building’s owners along with what rights, if any, remain for existing tenants within the Melrose location have left the issue to be resolved at a trial scheduled for March 13.

Frierson and Samek, asked how they’re addressing to the market whether the location on Melrose is a Fred Segal, deferred to their spokeswoman, who followed up in an e-mail to say the company could not comment on the location. Fred Segal and Sandow said in their complaint filed in court last fall “the location no longer has any affiliation with Fred Segal.”

With the Sunset flagship now on the eve of its sunrise, the executive team appears to view the opening as a way to jumpstart the brand’s growth. Frierson said the focus for new doors would be on L.A. and beyond.

“We love California. We love being here. We think the brand’s strong here and we think it’s strong globally also,” the executive said.