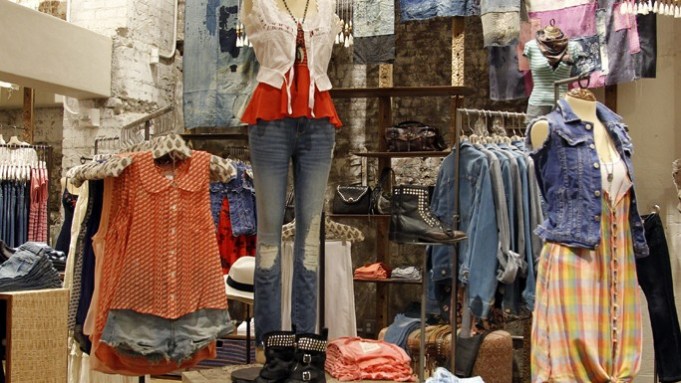 The retailer today will unveil its biggest store, a two-level 7,000-square-foot flagship at 10 West 49th Street in Rockefeller Center here. More than triple the size of an average Free People unit, the flagship’s inventory will have greater depth and more breadth, allowing the retailer to highlight new categories and blow out some existing ones.

The flagship is the first location to carry the brand’s vintage collection, Vintage Loves, which until now has only been sold at freepeople.com. The collection includes one-of-a-kind items such as true Victorian and Victorian-inspired garments in a white palette, Beacon blankets from the Thirties and Forties and vintage American flags dating back to 1948. A lace dress is $128; eyelet pants, $148; a one-off vintage top, $300, and flags, $228 to $288.

The entire second floor mezzanine — about 1,000 square feet — is devoted to FP Intimately, the brand’s intimates line that includes innerwear, slips, bodysuits, layering pieces and lounge jackets. We the Free, a collection once sold in stores and which moved to online-only sales, is available at the flagship for the retailer’s tomboy customer. Free People segments its shoppers into five profiles but believes its customer “has different personalities,” said Beth Wehagen, director of stores.

With 68 stores in the U.S., the retailer has left major markets untouched, such as downtown San Francisco. “We’re about to open our first store in Florida,” said Shiela Harrington, director of merchandising. “We know there’s a strong market for our products in Florida. We’re opening stores in New Orleans and Kansas City this week.” Free People in January unveiled a large two-level store in Center City, Pa.

Free People is getting ready to make its first international move with two stores planned for Toronto. “There’s a lot more than two stores to do in Canada,” Harrington said. “The customer is there. We can see it in our Web sales. That leads us to believe our brick-and-mortar stores [will be successful.] We’re looking at the U.K. We’re launching a U.K. Web site in the summer. We’re simultaneously interested in other places overseas.”

The company, which ships to more than 100 countries, is being guided by its international direct sales. “Direct is a more aggressive [business,]” Harrington said. “We’ve translated our Web sites in Asia.”

The Rockefeller Center flagship — across the plaza from one of Anthropologie’s largest units — has wood that was hand-carved in India covering the cash wrap, a long bench made of carved wood on the second floor, hennalike Rangoli paintings on the floor, curtains made from vintage Indian fabrics and flowers floating in bowls of water outside each dressing room.

Free People expanded its shoe collection with a dedicated department in the Rockefeller Center store to encourage shoppers to think of the brand “for head-to-toe dressing,” Harrington said. The location has the largest collection of handbags, including fringed varieties and one-off leather numbers hand-studded by an artisan in New York, $500. Executives talk about “hand touch,” the artisan-made aesthetic, whether genuine or inspired-by that fills the store.

Free People’s core customer is 27 years old, Wehagen said, adding that the brand is aspirational for younger people, while women in their 40s relate to the lifestyle it conjures.

The brand’s bottoms business and jeans are an area of growth, with everything from printed skinny jeans to patchwork denim pants. Free People is also dabbling in outerwear, including raincoats. A collection of T-shirts exclusive to the flagship features designs by tattoo artists Bart Bingham and Brad Stevens and illustrator Kim Krans of The Wild Unknown. The flagship is also the final stop of the FP Heart Strings guitars exhibit, which features hand-decorated Rickenbacker guitars that will be auctioned on April 3 on Charitybuzz.com to benefit Music for a Cure.

Looking from the mezzanine at the main floor’s dozens of carved wood lanterns hanging from the ceiling, carved wooden arches and delicate fabric flower garlands, Harrington reflected on the store’s ever-changing design. “Nothing is ever the same,” she said.