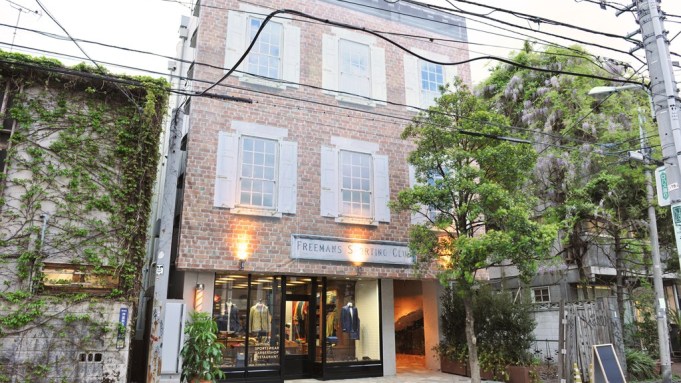 TOKYO — Japanese hipsters hungry for vintage Americana style have a new destination to add to their itineraries. Freemans Sporting Club opens the doors of its new 6,500-square-foot Tokyo complex on Friday.

The Freemans outpost, located in the Aoyama district, has a distinctly New York flair. The store is heavy on wood furnishings with old-school accents such as stuffed deer heads and a distressed leather couch that anchors the tailored clothing area.

The ground floor features an area selling casual shirts and pants as well as a case of vintage timepieces. The upper floors are home to a large white-tiled barbershop featuring a fish tank as well as an impressive workshop space for tailors crafting made-to-measure suits. But perhaps the biggest draw for locals will be the cozy bar and restaurant, the latter of which looks out over a vertical garden.

“Where Freemans was sort of organic over many, many years and almost 10, 12 years in the making, this is like two condensed months of planning,” explained Taavo Somer, the company’s founder and architect, in town to fete the store. “Very few things got lost in translation.”

Freemans is plotting further expansion in Japan. It opened the Aoyama store in partnership with Yagi Tsusho Ltd. and its sublicensee Urban Research. Somer said Freemans plans to open two more freestanding complexes similar to the Aoyama unit in other Japanese locations yet to be determined.  A number of shops-in-shop are also in the works.