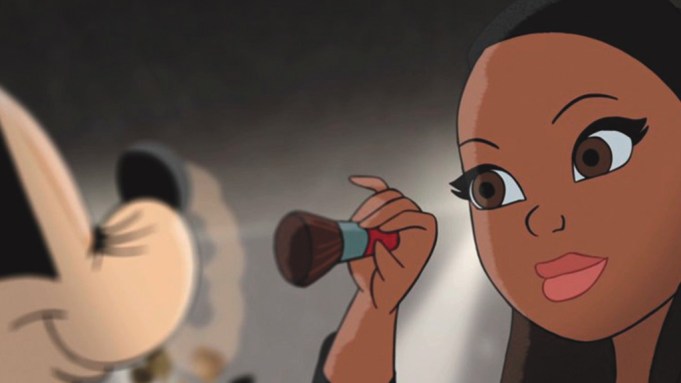 Holiday windows, they have the power to enchant, amuse and, as Barneys New York knows, provoke. On Wednesday, the store will unveil its Madison Avenue flagship windows done in collaboration with Disney. The iconic institutions of fashion and childhood wonder worked together to blend two very different small worlds in an animated short titled “Electric Holiday.” It will be looped on LED tiles that cover the two-story ground-floor facade on Madison.

WWD got a preview of the cartoon, which is far more enchanting and amusing than it is provocative. It opens on a meta note: a window-shopping Minnie Mouse gazes longingly at a Lanvin dress and daydreams her way to the front lines of Paris Fashion Week. She imagines herself primping in a grand hotel suite before a big day at the shows with fashion’s own cast of characters. On her way out, she stops to pose for Steven Meisel, while Suzy Menkes, Franca Sozzani and Linda Evangelista powwow in the lobby. Nearby are Sarah Jessica Parker and Donald Duck at a table for two. Wait! One more shot for Mario Sorrenti, who pops up like a paparazzo. Then it’s on to the Tuileries, where Minnie steps in stride with Carine Roitfeld. Juergen Teller is among the street-style photographer scrum, double-fisting cameras like a gunslinger as Anna Dello Russo and Lady Gaga preen.

Backstage Julien d’Ys coifs Cruella de Vil, while Pat McGrath, who looks like a Disney princess herself, powders Minnie’s nose and Guido Palau tends to her hair. Alber Elbaz and Nicolas Ghesquière put the finishing touches on their looks. KCD’s Ed Filipowski — headset on, iPad in hand — mans the front of house, which is stocked with the usual suspects: Cathy Horyn, WWD’s Bridget Foley, Daphne Guinness, Emmanuelle Alt, Glenda Bailey, plus Captain Hook and the Cheshire Cat. Alas, the Mad Hatter only ranked second row. Just before the show starts, Tinker Bell flies in with her fairy dust to transform Minnie and her crew into runway models. Out they come, Minnie in Lanvin, Snow White in Nina Ricci, Daisy in Dolce & Gabbana, Goofy in Balmain and Mickey Mouse in a Balenciaga sweatshirt circa fall 2012, all of them stone-faced and strutting like true pros.

When she comes back to reality, Minnie is joined by Mickey, bearing a kiss and a garment bag: the Lanvin dress. It looks fabulous on her, just the way she is.

The concept is kitschy, clever and absolutely adorable, the result of a year’s worth of creative collaboration between Barneys and Disney. “Disney came up on a very short list of dreams — thinking about if we could do anything, what would we do?” said Mark Lee, Barneys ceo. “They represent magic and Barneys New York holiday needs to be part magic and part surprise.” Particularly when it comes on the heels of a major coup like Gaga’s Workshop, the blockbuster theme of last year’s season.

Disney, a populist brand if there ever was one, wasn’t at all skeptical of partnering with something so elite. “Barneys is an incredibly creative company, a different type of creativity. It’s obviously the fashion world. We absolutely are passionate about [Disney’s] creativity. Ours is more about storytelling,” said Luis Fernandez, senior vice president of creative for Disney Consumer Products. “We thought, ‘A huge force in fashion and a huge force in animation. What better than for these two companies to get together and do something for the holidays?’”

Once Disney was onboard, the teams dreamt up their storyline and wish list of fashion personalities. Noticeably absent is one top American editor, but otherwise Lee said cooperation was forthcoming. “You say ‘Disney’ and — again, Disney is magic — that immediately gets people’s attention,” said Lee of the request, which came with a considerable leap of faith. All the participants, a group not known for its small egos, were required to sign off on rights to their likeness and its artistic interpretation, which meant no lording over final cut. Chin, noses and waistlines would not be redrawn. “We were unable and unwilling to give approval,” said Lee, who will be joined by Parker and Disney’s Bob Iger to reveal the windows Wednesday.

Few of the participants have seen the finished product, with the exception of Filipowski, who, as Lee’s partner, was granted access. Filipowski had no complaints about his artistic rendition, and wouldn’t mind the Disney treatment in real life: “I wish I had Tinker Bell at all my shows.”