In its 2019 Holiday Retail Forecast, FTI Consulting said “holiday magic is just an illusion for many retailers” despite a strong macroeconomic backdrop.

“Our forecast model projects a 5.2 percent increase in discretionary holiday sales this season, which we measure from November through January,” authors of the report said. “That would constitute a solid season in any historical context, but not quite a standout. What we know with greater certainty is that the outcome of this season — even if it’s an exceedingly good one — won’t much alter the fortunes or long-term prospects of struggling retailers that have lost their place in this landscape.”

Analysts at the firm said they expect store closures and bankruptcies “to remain at abnormally high levels in 2020, and Santa Claus can’t do much to change that.”

Underpinning results is online sales, which is accounting for most of the growth of overall retail sales. But the growth is not benefiting all retailers. FTI said in the report that the “greatest contributor to the widening disparity in the fortunes of large retailers in recent years is the swelling size of the online pie and the disproportionate size of its slices.”

Authors of the report said online sales account for a 16 percent share of total retail sales “and continues to gain just over one percentage point of market share annually.”

“That is a lot of merch — about $69 billion of additional retail sales moving from store-based purchases to the online channel [which includes both online-only sellers and omnichannel retailers] in 2019,” researchers at the firm said. “With total retail sales growing at about 4 percent annually, this movement of sales from physical stores to online is the equivalent of approximately 50 percent of the industry’s total annual sales growth.” 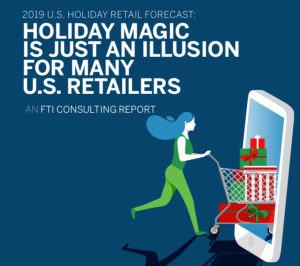 FTI said for traditional retailers with a heavy store base, “this leakage of sales to the online channel blunts the effect of stronger consumer spending.”

And efforts to create seamless and highly personalized shopping experiences along with offering free shipping and other incentives, is costly and also not benefiting all retailers.

“These myriad conveniences are made possible only by the enormous efforts and investment of primarily store-based retailers over the last decade to accommodate the many whims of shoppers, who have done little to return the favor in any meaningfully pecuniary way,” authors of the report noted. “Instead, they have turned their shopping loyalties elsewhere. Consequently, retailing is a far more complex and less profitable enterprise than it used to be. The only unambiguous winners are shoppers — and Amazon.”