The 70,000-square-foot store includes a café designed by Simon Porte Jacquemus, and a jewelry corner curated by Dover Street Market. 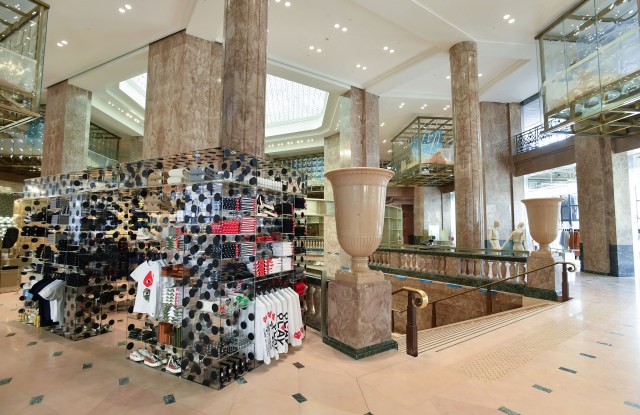 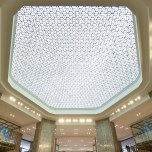 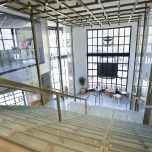 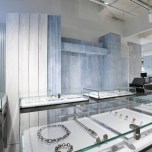 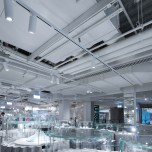 PARIS — When Galeries Lafayette revealed in 2014 it planned to take over the lease of the former Virgin Megastore on Avenue des Champs-Élysées, it could not have predicted that the opening of its new flagship would coincide with the most violent protests the city has seen in 50 years.

Nicolas Houzé, chief executive officer of Galeries Lafayette and BHV Marais, hopes that when the store at number 60 bows on Thursday, it will help write a new chapter in the history of the legendary thoroughfare, the scene of repeated clashes between police and gilets jaunes, or yellow vests, demonstrators since November.

For the French department store chain, the stakes are high: It is betting on the 70,000-square-foot store to redefine the local retail experience with a mix of spectacular architecture, new-generation sales assistants and a “phygital” store model incorporating elements of online shopping.

“For us, the Champs-Elysées project is important both in terms of innovation, but also in terms of business and diversification, so it goes beyond the crisis we are experiencing,” Houzé told WWD in an exclusive joint interview with Nadia Dhouib, director of Galeries Lafayette Champs-Élysées.

“It was a chance for us to rethink the model of the department store, since the retail space available is significantly smaller than what we’re used to,” he added. “We jumped on this opportunity to bring our contribution to the ongoing transformation of the Champs-Élysées.”

The opening comes at a challenging time for the Galeries Lafayette Group, which posted flat revenues in 2018, with sales up slightly at its main Boulevard Haussmann flagship in Paris, which accounts for roughly half the group’s turnover, and down in the rest of its network.

Revenues for the year to date are down, as the weekend protests against President Emmanuel Macron’s policies spread from Paris to towns such as Bordeaux, Toulouse and Orléans, where Galeries Lafayette has regional branches, Houzé reported.

“In December, we managed to more or less make up for the difficulties on Saturdays with strong sales on Sundays, especially in Paris. Since January and February, it’s been much harder. We estimate that the gilets jaunes movement has cost us around 50 million euros in lost revenues for Galeries Lafayette and BHV,” he said.

“That doesn’t include material damage nor the extra costs of hiring additional security guards,” Houzé noted. “We do around 65 percent of our activity with international clients and when they see those images, it tends to put them off from coming to Paris. So we really would like it to stop.”

Although the protests forced Galeries Lafayette to push back the opening by a week, the company hopes to reap the long-term benefits of planting its flag on the Champs-Elysées at a time of intense activity, with the recent arrivals of Apple, Bulgari and Dior Parfums, to be followed this year by Dior Couture, Chanel Parfums, Lancôme and Nike.

The street is also set to welcome new corporate offices for companies including Chanel, which will move some of its staff to the building housing the new Galeries Lafayette flagship.

The retailer has a long history on the avenue, which draws some 300,000 visitors a day on weekdays and up to 500,000 on weekends. Théophile Bader, Houzé’s great-great-grandfather, tried to secure the location some 90 years ago, but then the financial crisis of 1929 hit so the project was never completed.

Galeries Lafayette tapped Danish architect Bjarke Ingels to redesign the interior of the soaring Art Deco building built by the First National City Bank in the Thirties, creating unique features such as glass boxes suspended between marble pillars, and a glass stairway-podium on a corner with a 180-degree view of the street below.

The result is a breathtaking space that provides dramatic plunging perspectives and sweeping views from almost every corner. “The whole store is Instagrammable,” Houzé said with a smile.

The Citron café at the Galeries Lafayette flagship on the Avenue des Champs-Elysées.  Xavier Granet

The retailer is also introducing one-of-a-kind concepts such as Citron, a Provençal-style café designed by Simon Porte Jacquemus in collaboration with Caviar Kaspia, as well as a fine jewelry space run in partnership with Dover Street Market, housed in a special space designed by Rei Kawakubo.

To celebrate the opening, Chanel has created a series of pop-up installations inspired by its spectacular fashion show sets, including a pale gold Eiffel Tower in the center of the atrium, surrounded by mannequins standing on a sandy beach floor.

In addition to the pop-up decors, which will remain in place until April 21, Chanel has two permanent spaces on the second floor: one dedicated to shoes, and the other to watches.

In total, the store is home to 650 brands across four floors designed to reflect the best and latest in fashion, food and beauty, via a highly curated assortment displayed in mixed, multicategory spaces.

“We have really reconnected with our historic role as buyers, which we adore. We have picked not just brands, but specific products — sometimes we reference a brand for a single product,” said Dhouib. “The format of the store is scaled towards people, not brands.”

The executive said she wanted the store to reflect the way people shop online, which meant shedding the traditional shop-in-shop format in favor of a flexible, seamless approach where products are grouped by styles and trends. “It’s a playground, so the idea is to have fun and to surprise the customer,” she said.

“We conceived this as a ‘phygital’ store, where we draw from the digital sphere in terms of the way we present the product. Our shelves are more akin to installations than traditional store display units, which allows us to play with the codes of online visual merchandising, such as sorting by color or by shape,” Dhouib noted.

While she touted an “inclusive” approach designed to draw in Millennials, Houzé admitted it wasn’t easy to convince major luxury brands to break with longstanding rules.

Among those present in the store are Kering-owned brands such as Gucci, Balenciaga and Saint Laurent, but also Fendi, Loewe and Rimowa, which belong to rival LVMH Moët Hennessy Louis Vuitton. France’s largest luxury group has an important presence on the Champs-Élysées, including a huge Louis Vuitton flagship.

“Our aim is not to fight the brands. On the contrary, we built this store with them in order to create something very different. You can’t keep saying that all department stores worldwide are the same, and then object when we come to you with a very ambitious, daring project,” said Houzé.

“They were a little surprised. I will admit, there was some resistance, but in the end they all came on board because they understood the aim of this project, and saw that it was not a potential threat to our existing store on Boulevard Haussmann, or any other location, but really a full-scale test of something different,” he added.

Among the new approaches the retailer is testing is directly employing the store’s staff of 450, including 300 “personal stylists” who were recruited via Instagram and will act as a mixture of style and trend experts, cultural influencers and high-end hotel concierges.

They will use digital tools such as the Personal Stylist 2.0 app, which includes a mobile payment system and RFID, and provides access to information through community features such as Tagwalk and team messaging. Customers who prefer to shop without assistance can use connected hangers to check the availability of sizes.

Visitors enter the flagship, which has no ground floor windows onto the Champs-Élysées, via an immersive tunnel of kinetic art where they are greeted by a team of grooms and concierges.

The ground floor is home to pop-up stores and a beauty section divided into three areas: wellness and self-care; perfume, with a range of premium and niche fragrance brands, and makeup and beauty care. Brands range from Augustinus Bader to Frédéric Malle and By Terry.

The first floor is a mixed-use space for creative and emerging brands that will host collaborations and drops, with spaces for leather goods, jewelry, unisex sneakers, a denim lab and a selection of designer items ranging from ceramics to tech. A space called Buy Now, Wear Now offers goods inspired by the weather or recent events.

Rouje, the clothing label founded by influencer Jeanne Damas, is one of the brands that has chosen the store as its first physical sales outlet. System magazine has helped the retailer select books and rare publications that will be available on every floor.

Citron, the café designed by Jacquemus, is dotted with oversize terracotta urns and is designed to evoke a square in a southern French village, the designer said.

“I thought of all the references that have always inspired me, especially the memories I have of the landscape of my childhood: lemon trees, my grandmother’s cuisine, Provençal flavors,” he said. “I thought it was funny to transcribe this little piece of Mediterranean paradise in the middle of the Champs-Élysées in Paris.”

Jacquemus is also working with Caviar Kaspia on a more upscale 50-seat restaurant, Oursin, that will open in July on the store’s second floor, home to women’s and men’s luxury brands, leather goods, footwear, watches and a fine jewelry department.

Meanwhile, the bank’s former 1,075-square-foot, wood-paneled boardroom on the second floor has been transformed into a space for VIP services, book signings and events. On Friday afternoons, it will host a John Nollet hair bar.

A food court in the basement features a selection of partners and products selected by Julien Pham, the founder of food agency Phamily First. They include Little Zhao, a sandwich and noodle bar; Riviera, specializing in Mediterranean cuisine with a sustainable approach, and Maisie Café’s vegan, organic and gluten-free dishes.

Mathias Augustyniak and Michael Amzalag of graphic design studio M/M (Paris) created the bespoke logo and visual identity of the store, while perfumer Fanny Bal has produced a signature fragrance blending tangy rhubarb with the woody-musky notes of cashmeran.

Houzé expects the store to attract a more local clientele than the Boulevard Haussmann flagship, with a 50/50 mix of French customers and tourists. It will act as a laboratory for best practices to share with other locations, though Galeries Lafayette does not plan to duplicate the Champs-Élysées format elsewhere.

That is not to say the project is designed merely as a communications tool for the retailer, which has a pipeline of international openings that includes stores in Milan, Luxembourg, Doha, Kuwait and, over the weekend, Shanghai.

“It will have a halo effect for the brand, for sure, but we are not opening Galeries Lafayette on the Champs-Élysées merely as a communications tool,” he said. “It’s a very real business project, because our ambition is to make it a success.”