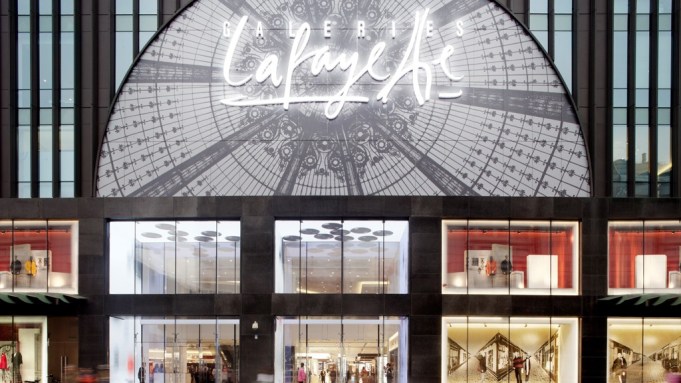 PARIS — Galeries Lafayette Group continues its international expansion with the inauguration Friday of a department store in Beijing, marking its return to China 15 years after the closure of its previous outpost in the country’s capital.

With a retail area of close to 350,000 square feet and 500 brands on offer, the six-story department store in the Xidan area is the retailer’s second-largest worldwide, after its flagship on Boulevard Haussmann in Paris.

The opening, which is expected to draw French actress Audrey Tautou and a host of Chinese celebrities, is the fruit of a 50-50 joint venture between Galeries Lafayette and Hong Kong-based I.T Limited that includes plans for the opening of 15 department stores throughout China in the next few years.

“China has huge potential for a brand like Galeries Lafayette, and we believe our offer and store format are sufficiently well adapted to the Chinese market for us to develop them on a large scale,” Philippe Houzé, executive chairman of Galeries Lafayette Group, told WWD.

The opening comes as the multibrand retail scene in China is heating up. Earlier this month, Lane Crawford opened a 150,000-square-foot flagship in Shanghai, while 10 Corso Como opened a store there in September.

Galeries Lafayette’s Beijing store has been three years in the making and opens at a time of decelerating consumer spending in China, where the economy is expected to grow 7.5 percent in 2013 after expanding 7.8 percent in 2012, its slowest rate in 13 years.

Nonetheless, Houzé was confident about Galeries Lafayette’s prospects in China, noting that with an offer that runs from affordable to premium, the store is positioned to appeal not only to luxury consumers, but also to the country’s emerging middle class and fashion-conscious young people.

“We are not here for six months or two years. We are here for the middle and long term,” he said. “I foresee a slow but sure growth of this market, and perhaps even faster-than-average growth for the category of consumer we are targeting.”

Early results from the store, which opened Sept. 28, are in line with expectations and Houzé expects it to log revenues of “at least” 40 million euros to 50 million euros, or $54 million to $68 million, during the first year of operation.

The project represents an investment of 40 million euros, or $54 million at current exchange, with each partner putting up half the sum, and future openings should cost roughly the same, he added.

Beijing was chosen as the location for the first Chinese store for its symbolic value and competitive landscape.

“China is a very centralized country that functions from its capital, and since we are in the country for the long haul, I wanted us to be seen by the Chinese and their leaders as partners for the very long term,” Houzé explained.

“The second, slightly more selfish, reason is that the competition is probably a bit less developed in Beijing today than in Shanghai,” he added.

The company’s turnover in Mainland China rose 31.8 percent to 2 billion Hong Kong dollars, or $262.5 million, in the financial year ending Feb. 28, accounting for 31.1 percent of its total revenues. Despite the prevailing economic headwinds, I.T expects to spend about 300 million Hong Kong dollars, or $38.7 million, on expanding its retail network in Mainland China this year.

“The economy is slowing down and so we need to adjust a bit. We’re slowing down a bit of our opening plan, but we still have a lot of shops opening,” Sham told WWD, pointing out the opening in July of an I.T store at Parkview Green in Beijing and another in Shanghai at LVMH Moët Hennessy Louis Vuitton’s L’Avenue complex.

“I think we still have a good opportunity,” he added. “Most of the department stores in China look the same — it’s always the same design, brand mix and concept. That’s why we want to come in with something interesting like Galeries Lafayette. We are setting a new benchmark for the local department store.”

The Beijing store was designed by London-based consultancy HMKM, which has worked in typically Parisian touches such as wall cornices and floors made of marble or wood laid in a chevron pattern.

In addition to luxury brands like Saint Laurent, Balenciaga, Bottega Veneta, Fendi, Chloé and Givenchy, the store will carry other brands licensed or owned by I.T Holdings. French brands exclusive to the store include Jérôme Dreyfuss, Rochas, Sandro, The Kooples, Tila March and Karine Arabian.

“This format does not exist on the Chinese market today,” said Houzé. “If this store is successful and if, as we believe, it meets the needs of the middle class and young Chinese people who love fashion and want to buy it, then we can go much faster and we could open the remaining stores within the next five or six years.”

Galeries Lafayette’s partnerships in Asia are also feeding back to its Boulevard Haussmann store, which recently hosted an exhibition at its Galerie des Galeries space celebrating I.T’s 25th anniversary, with exclusive designs from the likes of Stella McCartney, Maison Martin Margiela and Jean Paul Gaultier.

The Beijing outpost brings to 65 the number of stores in Galeries Lafayette Group’s network, and is its fifth international location after Berlin; Casablanca, Morocco; Dubai, and Jakarta, Indonesia. Further openings are planned in Istanbul and Doha, Qatar, in 2015, and other destinations are under consideration.

“We have very high quality partners in Indonesia, and those partners are very happy with the store we opened with them in Jakarta and are asking us to look at other big capitals in Southeast Asia, which we are doing at the moment,” said Houzé, referring to Indonesian retail operator PT Mitra Adiperkasa TBK.

The executive sees the Beijing store as a testing ground for its future efforts. “The Chinese market is very important to us because it will allow us to evaluate and refine our expertise in the fields of fashion, fashion education and in-store events,” he said.

Galeries Lafayette is keen to expand overseas as growth in its domestic market stutters. France is due to post its sixth consecutive annual drop in spending on clothes this year after sales slid 2.4 percent in the first half, hit by bad weather and a rise in living costs, according to the French Federation of Women’s Ready-to-Wear.

Houzé said group sales for the first nine months of the year were “slightly positive,” with growth in Paris — where tourists account for around 50 percent of sales — compensating for losses in some smaller cities in France. “We think 2014 is probably going to be another year of average consumer spending,” he said.

He hopes to enlist a growing number of brands to join Galeries Lafayette in its China endeavor.

“A lot of brands have yet to enter the Chinese market, and a number of them are wondering how to do it, where to do it and with whom. One of our objectives with this opening is to prove that we are the ideal partner for these brands to tackle the Chinese market,” Houzé said.