The modern, glass-covered store anchors a mixed-use site and includes a rooftop restaurant with a panoramic view of the capital.

LUXEMBOURG CITY — Fashion might not seem an obvious draw for visitors to the capital city of Luxembourg, better known for its European institutions or savory, puff-pastry treats, but the retail scene here is about to get a fresh injection of French style.

In search of faster and more even-keeled growth than offered in its home market, France, Galeries Lafayette is taking its Parisian fashion credentials to the country’s eastern neighbor where it will open a six-floor, glass-encased flagship on Saturday.

Designed by Lord Norman Foster, the store anchors a mixed-use site in the heart of the city, along the Boulevard Royale, tapping into a thoroughfare linking the historic center to the capital’s clutch of European institutions.

“Luxembourg for us is very important because it’s a country, a city, very close to France that is very attractive with an elevated level of buying power,” said Nicolas Houzé, chief executive officer of Galeries Lafayette. He cited economic figures like gross domestic product, which grew 2.6 percent in Luxembourg last year, outpacing France’s rate of 1.7 percent, while the country’s GDP per capita topped 100,000 euros, compared to less than half that figure in France.

The department chain has made international expansion, along with digital sales growth, a strategic axis for future development, opening stores in China and the Middle East, with local partners, as well as closer to home, with a flagship set to open soon in a shopping center in Milan.

Its presence in France — where it recently opened namesake department stores in the capital, on the Avenue des Champs Élysées and a shopping center in a western section of the city, as well as an Eataly franchise in the Marais district — is already significant, positioned in choice locations, added Houzé.

The digital era has added pressure on the industry to become more inventive to draw people into stores, and some developers and mall operators are looking to mixed-use sites to ensure steady traffic flows.

“This is a project that adds structure in more ways than one,” said Thierry Behiels, ceo of Codic, the developer behind the real estate project in Luxembourg, named the Royal-Hamilius, won following an international competition. The executive cited its combination of retail, offices — “because Luxembourg is not Luxembourg without offices” — housing, and public spaces, pointing to a model that showed a future tramway line that will stop in front of the store.

Stacked six floors high with a total of 70,000 square feet of space, an escalator bank runs through the center of the store. The selling space is set up on unfinished wood parquet, with French touches like Drucker bistrot chairs and tables and patches of tiled floor, kept airy with low display furniture.

“It’s conceived as an urban, city center store, human-sized and with a premium to luxury positioning for a Luxembourg clientele,” said Philippe Pedone, director of international development for the department store chain. The executive has been visiting China frequently, scouting for new locations in cities like Guangzhou, Xiamen, Suzhou and Chongqing. The group has a large store in Beijing and a smaller unit, just over half the size, in Shanghai, operated in a 50-50 venture with I.T., adding the means to tap into local consumption that is being encouraged by the Chinese government, which has lowered duties on some products.

At the new Luxembourg store, a rooftop restaurant caps the offer — a destination in itself — with a garden and two stories providing panoramic views of the city, still under construction, and angled windows that jut out over the street. The Manko restaurant, with a Peruvian slant, will be operated by Gaston Acurio and the Moma Group; glass elevators will ferry patrons from the ground floor directly to the top. 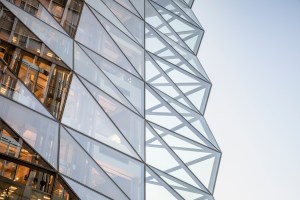 The ground floor is stocked with cosmetics, with open shelves, while glass walls at the street level offer a full view of the shopping space to passersby.

For the fashion-hungry, the group teamed with a local multibrand store, Smets, for a space carrying labels like Off White, and the store also carries the group’s “Edit” concept, with exclusive brands or products with names like Maison Labiche, Cuisse de Grenouille and Rains, in the women’s section and Adidas, Tommy Sport and Calvin Klein Performance on a men’s floor.

Two floors are dedicated to men’s wear — more formal or casual, carrying brands like De Fursac and Lacoste. Young executives in the city will be a key client base, executives predicted. 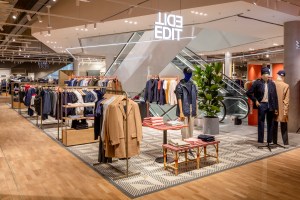 Nationalities are mixed in the city, with less than a third from Luxembourg while French and Portuguese make up nearly 20 and 10 percent, respectively, according to the city’s mayor, Lydie Polfer. She described her city as open and welcome to different cultures, which are considered an economic, cultural and social “added value.”

“Here we have something that is covetable — social peace — there’s never been strikes here, at least not in the past 20 years,” she added, in a slight poke at France. France is bracing for widespread transport strikes next week, which are expected to cause disruptions to schools and businesses, including retail.

Executives at Galeries Lafayette are growing accustomed to seeing their plans run up against unexpected challenges in the French capital.

The family-owned group revealed plans to set up a new flagship on the Avenue des Champs-Élysées in Paris five years ago, not knowing it would later become the scene of the violent yellow vest protests, which gripped the city late last year.

The store has underperformed expectations, even if it has been widely praised for its forward-looking style, crafted with the assistance of star architect Bjarke Ingels Group, better known for designing futuristic headquarters for Silicon Valley giants. Galeries Lafayette has embraced a fashion-forward approach for building relevance for the future and group executives consider it a success, in terms of image, even as they continue to tweak its format to adapt to shifting local preferences.

Earlier this month, reinforcing its hold on Paris, it opened a new mid-sized department store at the Beaugrenelle shopping center in the west of Paris.

In the coming months, the group will concentrate on extracting synergies from its recently acquired catalogue homeware and apparel business La Redoute, which it has expanded to new markets, with plans to open a site in Germany early next year.

Heading into the crucial holiday season, the group has seen a slight growth in business so far this year, executives estimated, cautioning that the weight of the end-of-year period will be a deciding factor for the annual performance.