Philippe Houzé, chairman of the board at Galeries Lafayette Group, said it would close loss-making stores in the wake of COVID-19. 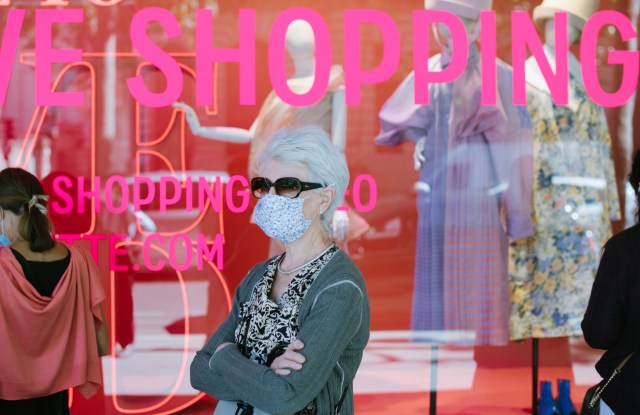 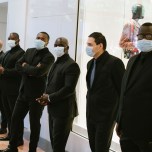 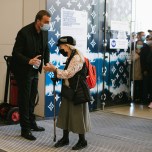 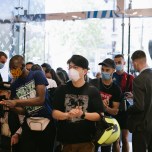 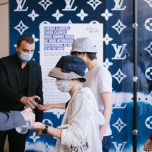 PARIS — Galeries Lafayette opened the doors of its historic flagship in Paris on Saturday for the first time in almost three months, as French business gradually resumes amid continued restrictions aimed at controlling the coronavirus pandemic.

The first customer through the door at precisely 11 a.m. was an elderly lady with two walking sticks. As she stopped for a squirt of hand sanitizer, she was rapidly overtaken by dozens of customers, greeted by warm applause from store staff and senior executives.

“It’s an emotional moment,” said Philippe Houzé, chairman of the board at Galeries Lafayette Group. “I’ve been coming here regularly, but seeing the store empty is fun for about five minutes. It’s quite something seeing this whole place shut. It’s as if there had been a nuclear war.”

His son Nicolas Houzé, chief executive officer of Galeries Lafayette Group, told WWD earlier this month he expected revenues this year to drop by 50 percent to around 1 billion euros. “In terms of profits, it will be even more,” said Philippe Houzé.

Clothing sales in France fell 85.5 percent in April, as all ready-to-wear stores remained shut nationwide, according to the latest data from the Institut Français de la Mode. Retailers’ revenues were down 30.9 percent in value terms in the first four months of the year, compared with the same period a year ago, it said.

“We do a lot of business with foreign tourists, so we’re going to be handicapped for at least another year. It’s hard to imagine tourism flows returning to normal levels before next summer. And for all of us here and for this store, that’s going to be very hard to weather economically,” Philippe Houzé warned. 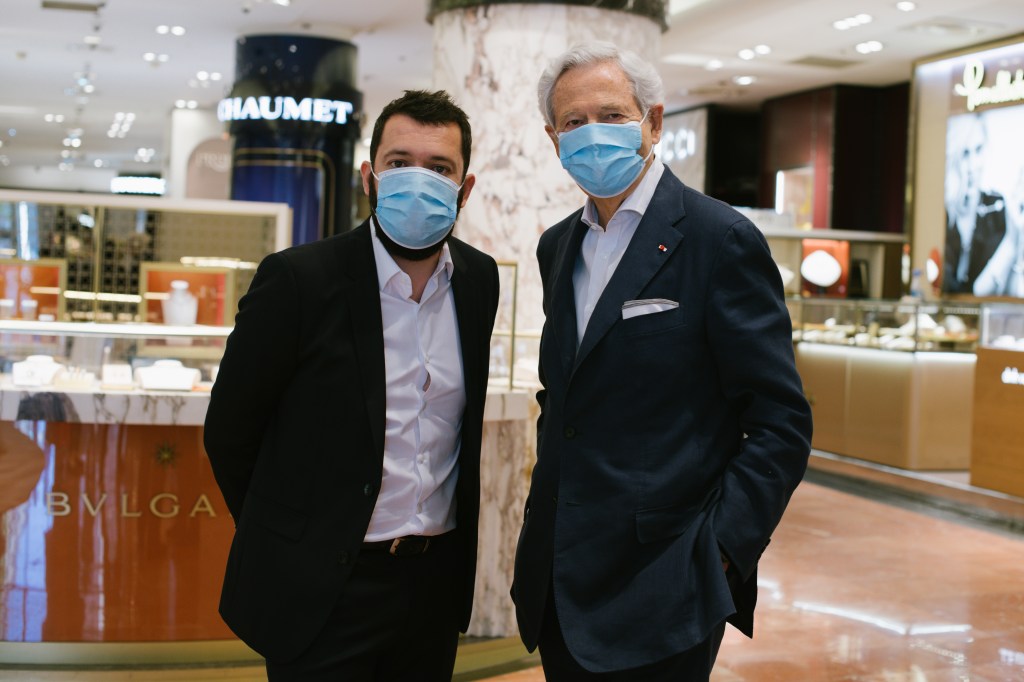 The retail veteran said the COVID-19 crisis raised questions about the tradeoff between public health and the devastating economic consequences of the lockdown, adding that Galeries Lafayette will close stores. “We support a certain number of stores that lose money, and not insignificant ones. Well, that’s over. We’re going to put a stop to that,” he said.

It was unclear which stores could be affected: Galeries Lafayette sold 22 locations, mostly located in smaller cities across the country, to real estate operator Financière Immobilière Bordelaise in 2018 as part of its strategy of adapting the classic department store model to suit a digital era.

In the meantime, employees appeared relieved to be back at work. “Confinement was hard,” confided a cash register attendant, seated behind a Plexiglas shield. “Stuck in a 325-square-foot apartment with nobody to talk to,” she mused.

“Hi everybody! Have I put on weight?” a male sales associate on the second floor shouted out to his colleagues.

Alexandre Liot, director of the Boulevard Haussmann store, which is famed for its Art Nouveau glass cupola, compared the atmosphere to the start of a new school year. “Our staff are eager to be reunited and to get back to work,” he said. “We all have a huge smile behind our masks, as you can imagine. We’ve been waiting for this for three months.”

Management had hoped the store would be allowed to reopen earlier this month along with other Galeries Lafayette locations, including the Champs-Élysées flagship and BHV Marais, but government authorities ruled the sizable flagship would have to wait until a later stage.

Liot said everything was ready to welcome customers, with masks mandatory throughout the store and workers offering regular top-ups of disinfectant gel. Floor stickers indicate safety distances in front of cash registers, beauty counters and shop-in-shops.

“Sanitary rules are our top priority,” said Liot. “It’s important for our customers and our employees to feel comfortable, so as long as the virus is around, we will wear masks.”

Evelyne Gallagher was browsing clothes with her husband and daughter.

“We’ve been to loads of other stores, so we didn’t really understand why it wasn’t open before,” she said, adding that she was not worried about being in contact with other customers. “It’s not a problem. We’re all protected, we all have our hand sanitizer — they give it to you at the entrance — so there is really no stress.” 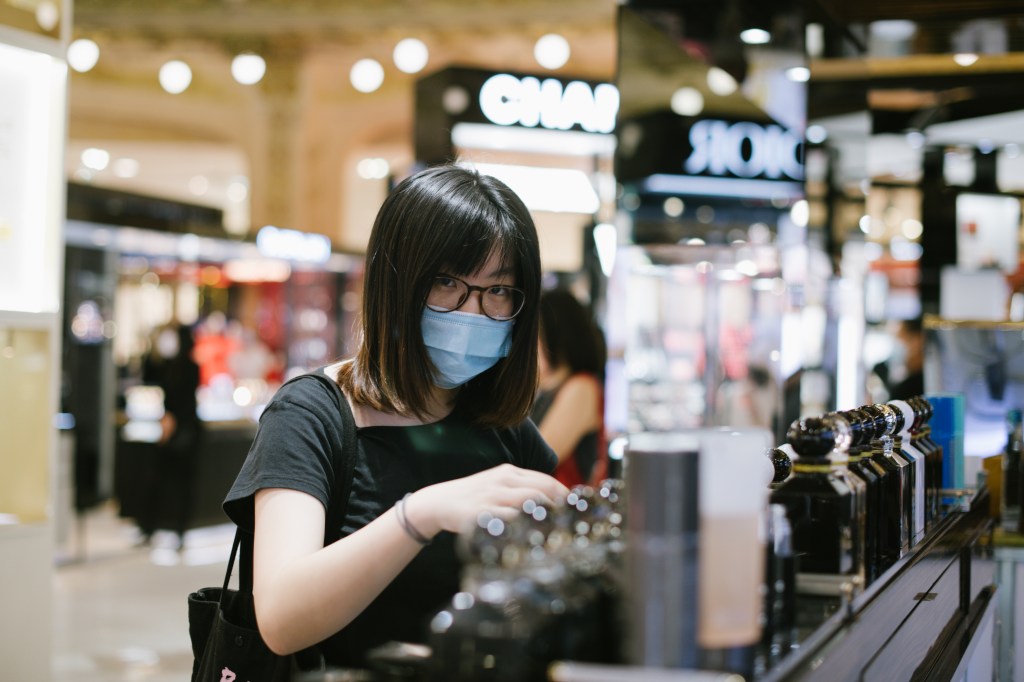 Rui Jiang, a Chinese student who lives in Créteil on the outskirts of Paris, was hoping to take advantage of the store’s fragrance promotions. The Galeries Lafayette web site is flagging reductions of 30 to 40 percent on perfumes including Gucci’s Flora Gorgeous Gardenia and Lancôme’s La Vie est Belle as part of its storewide 3J promotion.

“Since it’s the first day, I came early thinking maybe there would not be a lot of people,” she said, as she tested scents at the Tom Ford counter. “I really want to buy some perfume at a discount.”

Liot said the majority of his usual Saturday staffers were back at work. “We didn’t lay off anyone during this period and our aim, in the coming weeks and months, will be to preserve as many jobs as we can,” he said.

He could not predict when international visitors, who account for more than 50 percent of the store’s sales, will be back. “It will all depend on when borders are reopened,” he said. “For now, we are very, very happy to be reunited with our French customers, and we hope to welcome the rest of the world as soon as possible.”