Galleria and NorthPark Battle to Be Top High-End Mall

Galleria Dallas is seeking to reshape itself as it battles main rival NorthPark Center for retail tenants and customers. 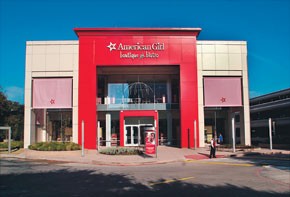 DALLAS — Galleria Dallas is seeking to reshape itself as it battles main rival NorthPark Center for retail tenants and customers.

Galleria Dallas, with 1.9 million square feet of retail space, has been among the biggest tourist draws in northern Texas. However, NorthPark Center began courting Galleria’s luxury brands and attracting others as it expanded and sought to become the leading high-end mall in the region. It picked off Cartier, which moved from Galleria in September to a bigger space. Gucci intends to relocate after its lease expires in 2010, a Gucci spokeswoman said. And marquee Galleria tenants Louis Vuitton and Versace are also eyeing NorthPark, real estate sources said. The companies declined comment.

Henry Miller 3rd, a Dallas developer and co-owner of Highland Park Village, an open-air luxury center dating from 1931, said Galleria Dallas was hurt by NorthPark’s growth, but added, “Galleria’s prospects are great. It is such a tourist draw with the [Westin Galleria Dallas] hotel that I think stores and brands that appeal to people who travel are probably flourishing.”

The three-level center with vaulted glass ceilings also features three office towers with 3,500 employees, an ice rink and range of stores anchored by Saks Fifth Avenue, Nordstrom and Macy’s, all of which made their Dallas debuts at Galleria. It has the largest Gap complex in the world with Banana Republic, Gap and Old Navy on separate levels.

The mall is building its youth business on the second and third floors with recent arrivals Pumpkin Patch, Charlotte Russe, The Children’s Place and others. The second floor concentrates on specialty fashion from Forever 21 to Chico’s, with teen draws like Abercrombie & Fitch. The first level houses contemporary and luxury, including Coach, Tiffany & Co., BCBG, Marciano, Thomas Pink and upscale restaurants.

“We remerchandised to get the newest, best and most fashionable retailers for our customers before they ask for them and wherever possible to be first in the market with a flagship offering,” said Peggy Weaver, Galleria’s general manager. Weaver declined to reveal mall sales figures, though she said they have grown each year and were up 8 percent in November and December.

“Unlike the rest of the country, Galleria Dallas continues to post strong sales improvements,” she said, noting new retailers “are driving additional traffic and sales.”

Industry sources estimated Galleria’s sales were over $600 million. In comparison, NorthPark was on track to do $869 million last year, though final numbers aren’t in yet, a spokeswoman said. Both centers have over 200 stores.

Galleria Dallas was updated in 2004 with a $60 million renovation adding palm trees, escalators, sleek wooden and glass finishes and a new entrance. Half the tenants have since changed to more fashionable nameplates, Weaver said.

The Westin hotel traditionally gave the Galleria an edge among visitors, but NorthPark is courting tour operators in Mexico and advertising in Oklahoma City, three hours away by car. NorthPark management plans to add a hotel, but nothing is set. The hotel is undergoing a makeover to bow this spring with updated decor, fixtures, floors and furnishings from the lobby to the conference center, and all 448 rooms, including four floors that were upgraded to luxury.

The mall is owned by a group of institutional investors led by UBS Realty, which bought the center in 2003 from original developer Hines Interests. The space around Galleria Dallas’ central ice rink will be upgraded by next summer when table-service restaurants replace fast food outlets.

Joanne Teichman, co-owner of Ylang 23, a designer jewelry store at the mall, said Galleria traffic dipped in 2006 when NorthPark’s new wing and movie multiplex opened. “But it has recovered,” she said, adding the 840-square-foot boutique chalked up over $6 million in sales last year, including online revenue.

“Retail expansion at Victory Park, NorthPark, the Shops at Legacy and Galleria Dallas has brought more people from farther away to the city,” Weaver said. “Galleria business continues to increase.”