Ganni Leads the Way for Scandi Takeover in London’s Soho

Copenhagen fashion darling Ganni is opening its first store outside Scandinavia in London's Soho, followed by a flurry of other openings by Scandi brands such as Wood Wood and Samsøe & Samsøe.

Inside the Ganni London store.

LONDON — London’s Soho and its laid-back mix of walk-in restaurants, raunchy nightclubs and specialty retail is proving to be a magnet for Scandinavia’s fast-growing labels, with openings by Ganni, Samsøe & Samsøe, Wood Wood and Viu eyewear all taking place this summer.

Ganni, one of the buzziest labels in the region, which has helped cement the importance of Copenhagen Fashion Week and draw the industry’s attention to Danish style, opened its first store outside Scandinavia on 36 Beak Street on Friday, following much anticipation from its dedicated community of Ganni girls in the U.K.

“#GanniGirls is now a hashtag with over 30,000 tags [on Instagram],” Nicolaj Reffstrup, the label’s chief executive officer said of the engaged online community that the brand has managed to build for its floaty dresses and flair for bold prints. “[The London opening] gives us a physical space for our social following to get the full-blown Ganni experience. We can bring our customers along on the journey with us and they’ll also be able to discover things like our in-store, take-back scheme as well as artworks from some of our favorite up-and-coming artists.”

The space spanning 2,750 square feet, is filled with pastel-hued walls and panels, quirky art and an array of rails featuring Ganni’s much-loved signatures, from leopard prints galore to boiler suits and roomy dresses. It will also feature three exclusive styles, including a cool floral-print leather miniskirt and shirt and a logo sweatshirt.

“Like our Stockholm store, we wanted a bright, open and colourful space with some unexpected and playful artworks. It’s been really important for us to create a space that is both inviting and inclusive, where people want to come and hang out. Much like the way we Danes decorate our homes,” said Ditte Reffstrup, the brand’s creative director, who credits British culture for inspiring her playful aesthetic. “The dream is for our London store to be a base for all Ganni Girls to meet, make friends and become a part of it all.” 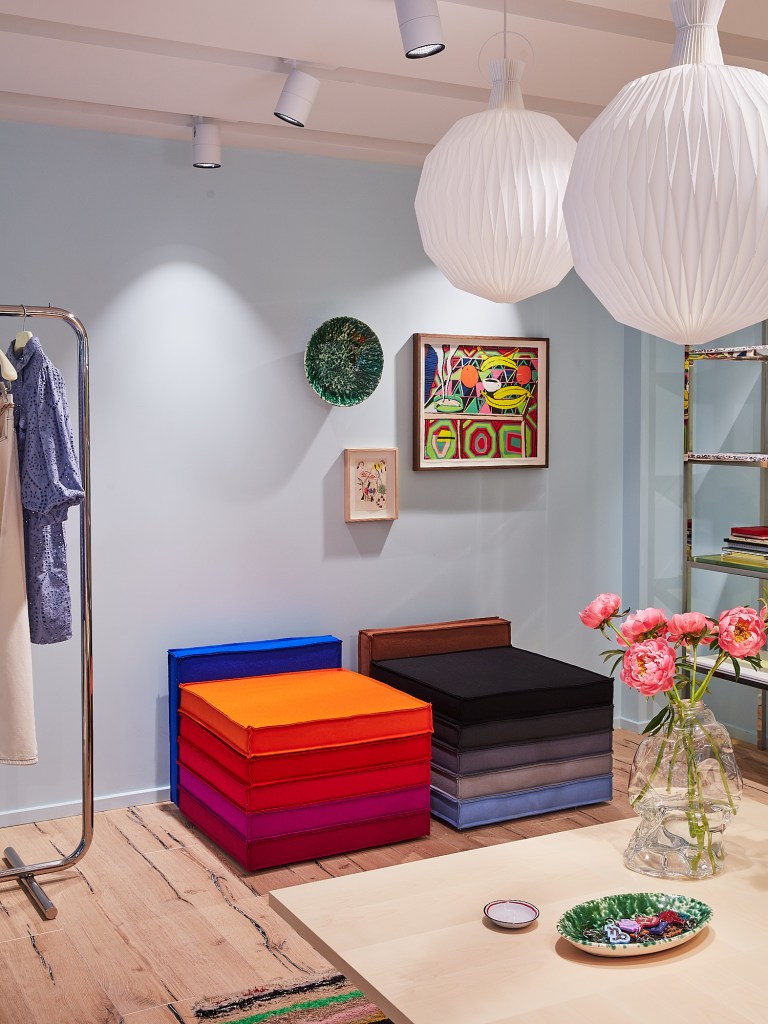 The Reffstrups also aim to encourage London’s Ganni girls to start thinking about sustainability and consuming responsibly, by debuting a take-back scheme. Customers are encouraged to deposit their unwanted clothes and shoes by any label in recycling boxes found in-store.

“We view it as our responsibility to practice what I call micro-activism every day. We know it’s just a small part of it all and we’re far from perfect, but we hope with every store we can do more to reduce our impact and support businesses who are trying to do their bit,” said Nicolaj, also pointing to the secondhand furniture the brand sourced for the new Beak Street location, including a series of Alvar Aalto Artek stools and the use of renewable energy in-store.

The London opening marks the first step in the brand’s ambitious, international expansion plans, with stores in New York and Los Angeles also in the works.

“It’s always been our mission to create a Copenhagen-based brand with global ambitions and this year marks our 10-year milestone at Ganni. We’ve seen some pretty rapid growth over the past five years on an international scale, so a brick-and-mortar store outside Scandinavia was the next logical step for us,” added Nicolaj, who along with his wife Ditte threw a joyful show-cum-dance party during Copenhagen Fashion Week earlier this month which included a performance by brand MO and a colorful lineup of printed dresses, baggy denim and bold cowboy boots, which buyers are predicting will be next season’s sell-out shoe. 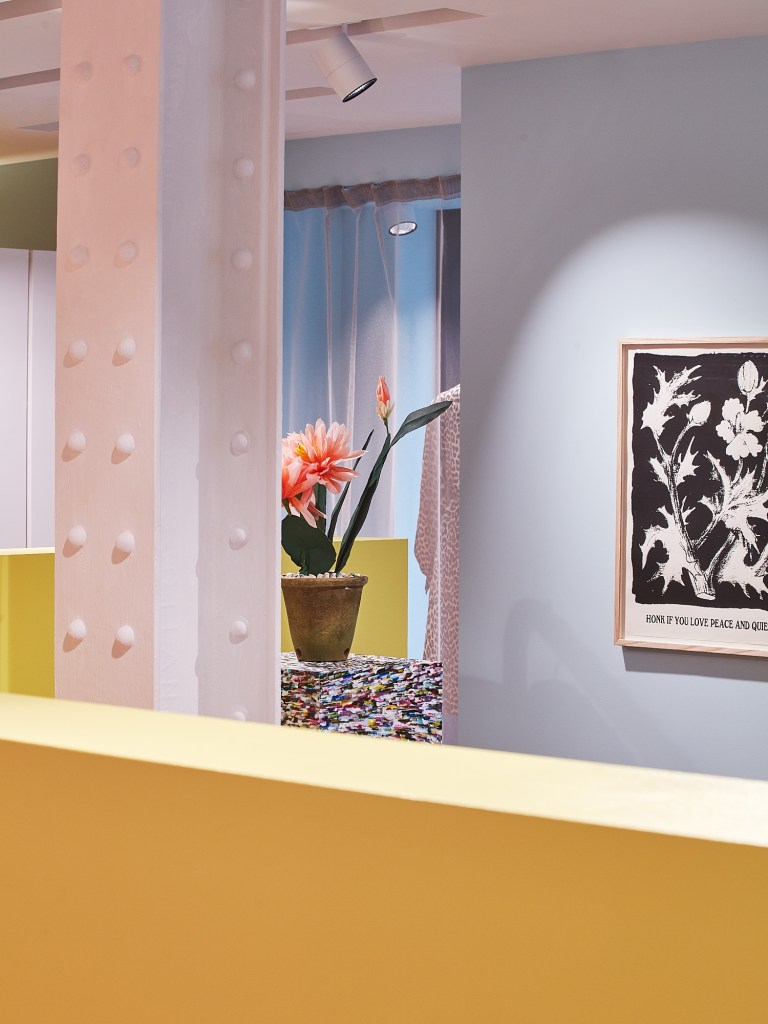 Inside the Ganni store in London.  Courtesy Photo

Across the street from Ganni, fellow Danish label Samsøe & Samsøe has also opened the doors to its Soho location, a minimalist, airy space filled with geometric furniture, subtle pops of color and books on hygge.

“The store celebrates a minimal and light Scandinavian design tradition where the store works as a neutral backdrop for the collection and product,” said the brand’s designer Mia Kappelgaard, adding that the brand used its London debut to unveil a new logo design and “visual identity.”

With its laid-back, minimal approach to dressing, Samsøe & Samsøe has been growing a strong online following and expanding its customer base, so an international store opening was a natural next step.

“London is the European gateway to the rest of the world. There are twice as many people living in London as in the entire country of Denmark — so there’s a huge potential on so many levels,” added Kappelgaard, who is also eyeing Notting Hill and Shoreditch for future openings and made its debut at Copenhagen Fashion Week this month.

The brand is also planning to open its first store in Paris’ Saint Germain area in October to coincide with Paris Fashion Week and is now working with local sales agencies to expand its wholesale business in Australia, Poland and the U.S.

“We offer a playful and unpretentious take on the Scandi minimal approach — I have a feeling more and more people are falling in love with that take on fashion,” added the designer.

Eyewear label Viu, which is Swiss and has a strong presence in Scandinavia, is also readying its London opening next to Ganni, as part of a broader expansion strategy with a focus on physical retail.

“We see great potential in the larger European markets for a disruptive eyewear concept like Viu that combines the power of online with a retail store experience. Europe’s prescription eyewear market alone totals 30 billion euros and we are confident that Viu [can cater to] design and quality-oriented customers,” said a company spokesperson.

The store will feature mirror installations in a bid to create Instagrammable moments, and also offer the brand’s range of 3-D-printed frames.

The company, which has just hired Mario Muttenthaler to be its new chief marketing officer, said that it will also be forging ahead with two more openings in the British capital in 2019 to build on its existing retail ecosystem in markets like Sweden, Denmark, Germany and Switzerland.

Also joining the neighborhood is Wood Wood, the street wear-focused Danish label that has been slowly building its presence here by opening a local office and participating at London Fashion Week Men’s. 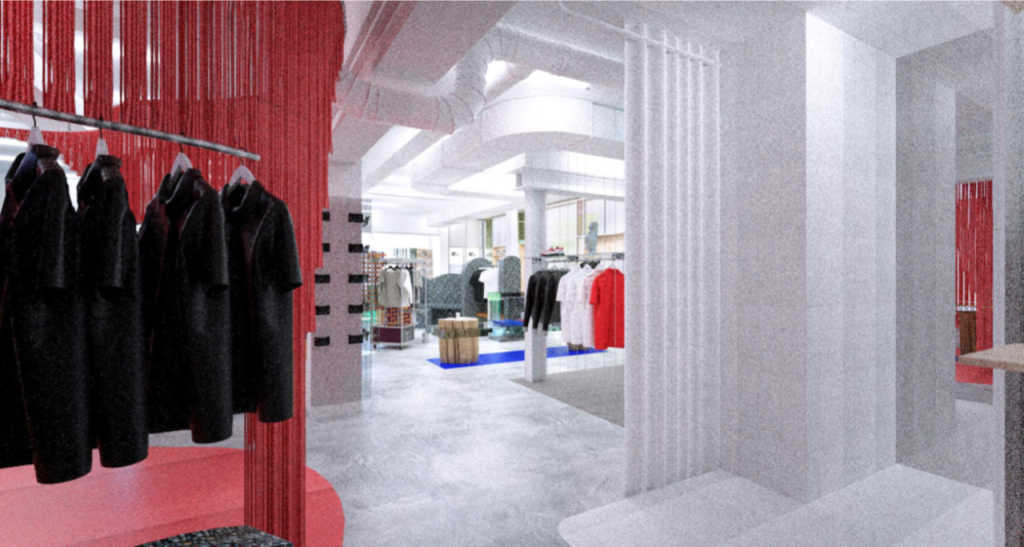 A rendering of the Wood Wood store in London.  Courtesy Photo

“Having opened our office in East London four years ago and having our U.K. wholesale operations present on a local level helped us to better understand the market. The retail market is obviously a bit shaken right now because of the Brexit situation and the uncertainty here. This can be frustrating to think of when it comes to the timing of opening a store there, but I still believe London has a growth potential as there are so many creative people coming to the city,” said Karl-Oskar Olsen, Wood Wood’s cofounder and creative director, who had chosen to take a break from the London runway this year and focus on developing the brand’s store concept, alongside its newly launched e-commerce site.

“Our London store will define the brand’s future retail concepts. When designing the store we wanted to reflect Wood Wood’s values of creativity, quality and attitude by having customized interiors and a huge variety of materials, surfaces and structures.”