Gansevoort Row to Welcome Retailers to the Meatpacking District

The center of gravity has shifted with the opening of Hermès and the reopening of Pastis.

A view of the Gansevoort Row block.

NEW YORK — The pieces are falling into place in the Meatpacking District, where three retailers including Brunello Cuccinelli, Frame and Belstaff are set to join the 10-building project known as Gansevoort Row, which is being redeveloped by Aurora Capital Associates and William Gottlieb Real Estate, among the most active landlords in the neighborhood.

In addition, Loro Piana, which is operating a shoe pop-up shop at 3 Ninth Avenue, has signed a long-term lease at that address and will renovate the space into a full-line store once the shoe concept closes.

Gansevoort Row is anchored by Hermès, which occupies the corner at Ninth Avenue. The Parisian brand is seen as attracting more luxury players to the Meatpacking District.

Cuccinelli in spring 2020 will open a 6,100-square-foot, three-level store at 50 Gansevoort Street. The unit, which is situated between Hermès and the reopened Pastis restaurant, will boast a large private terrace on the store’s second floor. The store will sell the brand’s men’s wear, women’s wear and accessories.

Hermès, which opened its store at 46 Gansevoort Street in April, took a calculated risk on the neighborhood when it signed its lease. “Other than Jeffrey New York [on West 14th Street,] there were really no other luxury brands in the Meatpacking District. We like to be pioneers,” said Robert Chavez, president and chief executive officer of Hermès USA, adding, “We’re very, very happy [with the business].”

“Lots of changes have started to happen pretty quickly,” Chavez said. “Loro Piana opened a pop-up across the street. Since Pastis reopened the activity and traffic have gone up significantly. It’s really animated the neighborhood the way it used to. Restoration Hardware has become very popular as well.”

The latter’s 70,000-square-foot gallery occupies six stories and includes a rooftop restaurant and bar. “Our first guest house will open in May,” said Gary Friedman, chairman and ceo of Restoration Hardware. “We’re going to create a new market for privacy and luxury. The guest house will have a singular design statement and only nine rooms and a restaurant.” 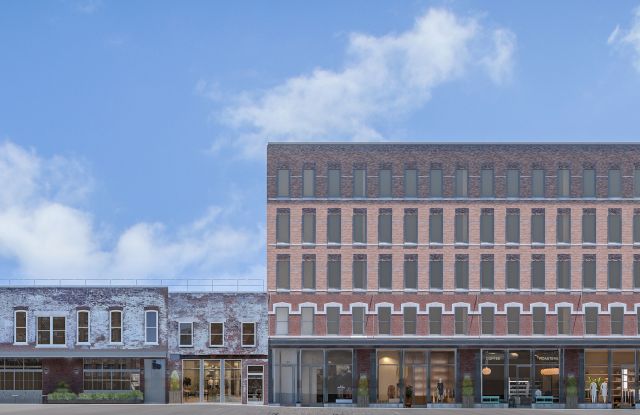 When RH signed its lease seven years ago, the Meatpacking District was a different animal. Friedman recalled telling the company’s board of directors that he hoped RH, along with the opening of the Whitney Museum of American Art, “would tip Gansevoort Street to luxury. It was more of a dream. The Meatpacking District didn’t have luxury, and retail was underperforming compared with other neighborhoods.

“It’s an amazing rebirth,” Friedman said. “There’s now a good mix of innovative, new incubated retail and you have a layer of luxury. The whole way it’s coming together is wonderful.”

Keith McNally, who reopened Pastis with restaurateur Stephen Starr, said, “I miss the grittiness of the area as it was when I first moved there. I  avoided the temptation to modernize Pastis. I’m shocked by how many the old Pastis customers are still alive let alone are now customers of the new Pastis.”

“It has so many dimensions,” said Andrew Rosen, founder and advisor to Theory. “To me, it’s the most forward and modern part of the city. It’s all been refurbished [while respecting] the history and architecture, and it’s also been re-tenanted. The Whitney and the High Line are anchoring everything. What’s now being built on the waterfront is incredible. There’s no big, tall buildings, you have art and food and nightclubs and blue sky. I work there and it’s a very inspiring environment.”

Issacs and Company founder Joel Isaacs said five spaces are available in the Row, including a bigger store at 70-74 Gansevoort Street with 9,000 square feet on the first two floors. Asking rents on Gansevoort Street are $500 a square foot for ground floor space and $600 a square foot for a corner. “They really want to curate a great street,” Isaacs said of the owners. “What the Meatpacking District has going for it is the mix of retail and food.”

The Meatpacking District BID on Aug. 6 will unveil 20,000 square feet of public plazas on Gansevoort Street and Ninth Avenue, said Jeffrey LeFrancois, executive director of the Meatpacking District Management Association, adding that the permanent public space will be a catalyst for all types of businesses. “On 14th Street between Ninth and Tenth Avenues, we’re installing planters and new trees to drive foot traffic further west. It’s a very wide street without human scale compared with the low-slung buildings and charming streets elsewhere in the Meatpacking District.”