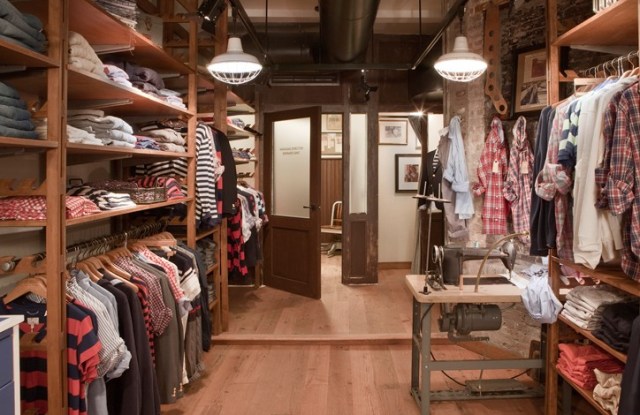 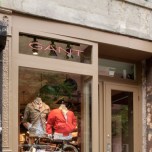 Gant today opens the first freestanding store for the youthful Gant Rugger label in New York’s West Village. Located at 353 Bleecker Street, the 700-square-foot shop serves as a showcase for the men’s contemporary collection, which has become the most important component of Gant’s business in the U.S.

“Bleecker Street is the logical next step in the development of Rugger as a stand-alone business,” said Ari Hoffman, chief executive officer of Gant USA.

Situated in a historic landmark building, the slender space has been under construction since September, due to complex building requirements. Gant holds a 10-year lease on the store, which was previously occupied by the men’s boutique Gerry’s. Hoffman expects the new store to generate more than $1,500 in sales per square foot.

The store’s design was overseen by Christopher Bastin, head designer of Gant Rugger, along with an in-house team based at Gant headquarters in Stockholm, Sweden. The shop replicates an industrial factory based on Gant’s historic manufacturing facilities in New Haven, Conn., where the brand was founded in 1949. There is an exposed brick wall, an adjustable wood shelving system, metal tables and retro lighting fixtures.

“We tried to create a space that inspires a mix of creativity and functional design, with a nod to the passion that went into our grassroots shirtmaking origins from all those years ago,” said Bastin, pointing out decorative touches like vintage irons, thread spools and framed photos from the Fifties and Sixties. A dressing room in the rear of the store is modeled after a factory foreman’s office, with a frosted glass window etched with the words, “Bernard Gant, managing director.”

Bleecker Street is the main retail corridor of the West Village. Stores adjacent to Gant Rugger on the same block include Black Fleece by Brooks Brothers, Sunglass Hut and Alexis Bittar.

This is Gant’s second store in New York; the existing flagship at 645 Fifth Avenue carries both Gant Rugger and the main line. (A Gant store in SoHo was closed in 2006.) Hoffman said the company will likely open additional Gant Rugger stores, both internationally and in the U.S., in coming years. A pop-up Gant Rugger shop was open for two weeks in Paris’ Marais district earlier this month.

Gant Rugger, which is a men’s-only concept, now represents the majority of Gant sales in the U.S. — a departure from the rest of the world where the core Gant line is the mainstay of the business. Gant Rugger was launched in 1973 as an offshot, grew into a sizable business in the Seventies and early Eighties, but was closed in the mid-Eighties.

Four years ago, Gant Rugger was relaunched as a hip shirt line and then expanded into a full collection in recent seasons, gaining the most traction in the U.S. The line is now sold in about 250 doors in the U.S., with the biggest accounts including Barneys New York, Saks Fifth Avenue and Nordstrom. For fall, Gant Rugger will debut in select Bloomingdale’s doors. Specialty store accounts include Scoop, Kitson, Fred Segal, Mitchells and Mario’s.

Gant rings up one billion euros, or $1.33 billion at current exchange, in worldwide sales, according to Hoffman. The brand is privately held by Switzerland-based Maus Frères SA, which also owns Devanlay SA, the worldwide apparel and accessories licensee for Lacoste.