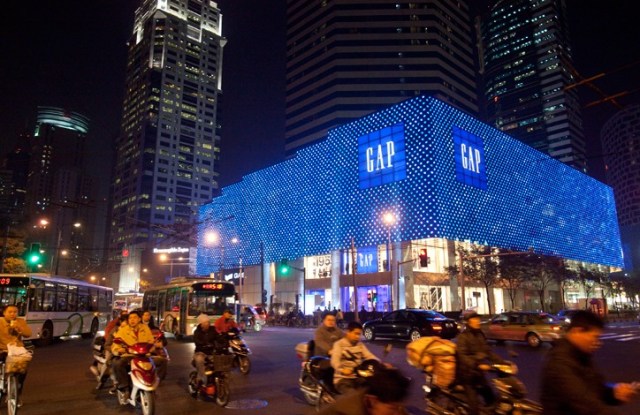 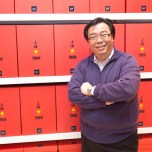 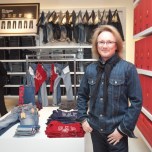 SHANGHAI — The flagships of Louis Vuitton, Ermenegildo Zegna, Cartier and other luxury retailers clustered together on Mid Huaihai Road, a premier shopping street in the heart of the city, now have a new neighbor: Gap.

This story first appeared in the November 11, 2010 issue of WWD. Subscribe Today.

On Wednesday night the American retailer unveiled the first of four wholly owned Gap stores in China in Hong Kong Plaza, a high-end shopping center on Huaihai. A launch party included speeches from regional executives and a fashion show featuring the 2010 holiday collection. The flagship will open to the public today.

Two stores will open in Beijing — a two-story flagship in the AMP building on Wangfujing Street and a smaller space in Chaobai City, a regional shopping center — on Saturday and another flagship in the next several weeks on Nanjing West Road in the Venture Tech building in Shanghai in what executives say is a part of an ambitious plan to take Gap Inc. global.

In October, Gap Inc., which will also open stores in Italy by the end of the year, said it expects international and online sales to account for 25 percent of revenues by 2013. Those areas accounted for 12 percent in 2009. The retailer’s chief executive officer, Glenn Murphy, has been at the forefront of the company’s global road map.

Gap Inc. also launched an online e-commerce platform in China, which so far has received more than 300 orders from customers as far away as Sichuan Province in the south and the city of Harbin in the north. The company said there are plans to open a site on Taobao, China’s top e-commerce platform.

“We have an appetite, we have motivation and we have a ceo now that really believes in international growth,” John Ermatinger, president of Gap’s Asia-Pacific region, said during an interview in the company’s new Hong Kong Plaza flagship. “We now have the financial power and the wherewithal to make that happen.”

In terms of achieving growth in China, Gap faces the challenge of figuring out exactly how to position itself to a Chinese middle-class consumer who may or may not be familiar with the brand and who also already has a number of other retailers, both domestic and foreign, with similar price points to choose from.

“We studied them all,” Ermatinger said. “We looked at all of our competitors both local and international, and that has guided us in terms of our pricing structure, our store design and our product selection and presentation. We believe we are going to be as competitive and attractive as any brand in this market.”

Executives say one key to luring those consumers into the Gap will be the actual Gap retail spaces themselves and the in-store experience they offer to clientele versus competitors.

Leaning slightly toward a luxury shopping experience, a message the company perhaps intends to convey with the presence of the other luxury retailers nearby, the stores have denim experts with whom clients can make special appointments along with other specially trained staff, greeters at entry points and an overall aesthetic emphasizing a bright, white and optimistic environment, which executives say research indicates Chinese consumers want.

According to a 2009 KPMG survey, Chinese shoppers place a premium on impressive retail spaces and attentive, well-trained staff when making purchasing decisions, especially for luxury goods.

“My job here is to make sure we land the right property so that we can open beautiful stores,” said Redmond Yeung, the president of Gap China. Yeung, formerly president and chief operating officer of China and Asia-Pacific for Best Buy Co. Inc., was named president to oversee business development and real estate.

Seventy percent of the product mix for Gap China comes from American collections, including khaki and black pant campaigns, while around 30 percent is from Japan, including slim-fitting puffer jackets and denim. All apparel has been resized for Asian body types.

Specific to China, Gap has introduced a special China Edition 1969 Premium Jeans Vintage, a replica of the first-ever denim sold at Gap stores with fabric produced on authentic looms used in the early Nineties, matte gold finish buttons on the fly with a “China Red” button at the top and traditional Gap 1969 copper oxide rivets with the addition of a single red rivet on the watch pocket. The jeans sell for 1,968 yuan, or about $289 at current exchange rates.

“Chinese consumers are very interested not only in the product but they are also interested in the story, what is behind the product,” Ermatinger said. “We thought there was a lot of historical significance around our launch in 1969, so we wanted to go back and make an authentic product.”

“Here is the big idea. We will be just like any other brand. We will come and go, and the Chinese consumers will taste the brand and then they will move off of it if you are not successful in reaching into their heart and soul and mind,” Ermatinger said. “We feel the Gap brand has to be more than just a ploy. It has to be a brand that has substance, it has to be deep and it has to be meaningful beyond just the transaction.”