Ceo Art Peck said the company is doing "aggressive work under the covers" to separate Old Navy from Gap Inc.

“Depressed demand due to weather and aggressive promotions to move units through the system.”

“The first quarter was one of the coldest and wettest quarters in memory,” said Peck. “It was difficult to overcome slow business in February,” Peck said during a conference call, adding that the late Easter and delayed tax refunds compounded the difficulties.

“It was a very tough environment for apparel.”

However, Peck didn’t put all the blame on the macro environment, and acknowledged the company “could have executed better” during the quarter, indicating softness in women’s at Old Navy where the offering was “too narrow” in colors, silhouettes and prints, while Banana Republic, making progress in its turnaround, still has room for improvement in products and marketing, he said.

Net income for the quarter ended May 4 reached $227 million, versus $164 million in the year-ago period, but comparable sales were down 4 percent and all the core divisions showed negative comps. Old Navy, in a rare slip, was negative-1 percent; Gap was negative-10 percent and Banana Republic global was negative-3 percent.

Adjusted earnings per share were 24 cents, while 32 cents had been expected by Wall Street. 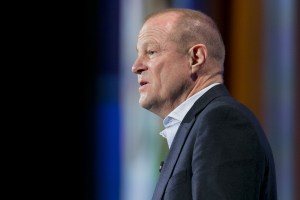 Net sales were $3.7 billion, a decrease of 2 percent compared with last year. The translation of foreign currencies into U.S. dollars negatively impacted the company’s net sales for the first quarter by about $34 million.

Also, the company was up a dramatic 10 percent in inventory, to $2.24 billion, impacted by the weak consumer demand, the acquisition of Janie and Jack, increases in in-transit times and net store growth year-over-year.

“This quarter was extremely challenging, and we are not at all satisfied with our results,” Peck said. “We are committed to improving our execution and performance this year.”

Investors and analysts were hungry for details on how the corporation is progressing on the planned separation of Old Navy from the rest of Gap in 2020, forming two public companies.

As revealed in February, the $16.6 billion Gap Inc. plans to split into two publicly traded companies: Old Navy, and the other, still to be named, consisting of Gap, Athleta, Banana Republic, Intermix and Hill City.

Peck will run the new company, set to be created by next year, while Sonia Syngal, president and ceo of Old Navy, will remain in place.

Peck did provide some commentary, stating, “We remain on track as we work on executing the separation. We formed a project management office” to be able to “isolate the separation work from the operations of the business,” so one doesn’t distract from the other.

“We are pushing in many respects harder than the comfort level is within the organization to move forward. We are only a matter of a couple of months into it, but we did make it clear we needed to announce before we could begin the real work.

Peck said there will be an investor event in mid-September to “continue the conversation.”

“It would be profoundly shortsighted to question the wisdom of the separation based on the performance of the quarter. We are staying the course. We believe it’s the right thing to do for long-term shareholder value creation.”

He said the separation would lead to “some level of dis-synergies,” but enable Gap Inc. to “lighten up on corporate and brand overhead as much as possible and as quickly as possible.…When we are 50 years old, as we are this year, if you don’t break some things, you aren’t going to achieve the kind of enduring change that you need.”

Much of the rationale behind the separation, Peck said, revolves around bringing together the needs of Gap Inc.’s specialty and value chains and the demands of customers, which have been diverging, and because the pace of retailing keeps accelerating.

While Old Navy faltered last quarter, Peck was confident in the business, noting it has a “long clean runway for growth ahead” and a “powerful, almost unique four-wall model.” The division will open 70 stores during all of 2019.

While the Gap brand’s comps were disappointing, Peck said the story of Gap is that of a brand focused and regaining profitability through improved product assortment and expense reduction, and by eliminating stores that are underperforming.

He also said he was pleased with the progress in repairing Banana Republic, despite its recent performance and that the team has been restoring the fundamentals and high-quality products.

With Athleta, Peck said he’s bullish and that the brand’s expansion has accelerated this year to 25 new stores from 15 to 20 in past years. He cited the brand’s “clear identity, commitment to sustainability and connections to customers.

Hill City, the digital native men’s brand, represents “a very exciting opportunity, while the Jani and Jack high-end children’s clothing brand with 140 locations and an attractive profitable online channel is a “great tuck-in” into the Gap Inc. portfolio.