NEW YORK — In the past decade, Manhattan’s Fashion Center Business Improvement District has cleaned the streets, lobbied for a greater police presence, installed light fixtures, patched up the sidewalks and created new public spaces with... 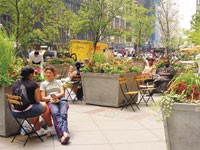 NEW YORK — In the past decade, Manhattan’s Fashion Center Business Improvement District has cleaned the streets, lobbied for a greater police presence, installed light fixtures, patched up the sidewalks and created new public spaces with an outdoor garden as well as a fashion walk of fame.

Now, district members are tackling the more daunting task of bringing retail — and vibrancy — back into the neighborhood. This time, it will take working a bit closer with the business side of the public-private partnership that makes up the district.

“One of the most important things that can happen for us is for landlords to bring in the highest-quality ground-floor retail that they can,” said Barbara Randall, executive director of the FCBID. “When you walk through the district, even though we have much more appealing retail than we did five years ago, the overall visual is not pleasing. And that has to do with the lights, window installations, signage and awnings. It has to do with better retail.”

“In terms of retail, the BID is tucked between two powerhouses, Times Square and Herald Square,” explained George Glatter, assistant commissioner of neighborhood development and head of New York City’s BID program. “They have lots of people passing through the district going from one to the other, and they should be capturing some of that. This year is when they’re really looking closely at what they can do to strengthen that.”

It’s not as easy as adding more shops. Just as cleaning up the BID required multiple parties to get involved, so does improving street retail. The FCBID is a classic public-private partnership between private real estate owners and city officials. Area landlords agreed to pay a property tax stipend to the city, which designates the funds back to the neighborhood in the form of an improvement district. Originally formed in 1994, as the historic Garment District was losing apparel manufacturers and jobs, the BID’s priorities were sanitation and security.

By 2004, workers had collected 4,600 tons of litter in the neighborhood and crime was down 65 percent. In that time, it also attempted to redesign the look of the district with free architectural consultations to area landlords and retailers to improve their facades and storefronts. It recently launched its “Make a Grand Entrance” program, which gives landlords $1,000 toward sidewalk improvements or new exterior gates or lighting. It has spent more than $50,000 on that program to date.

Now, BID leaders, landlords, city officials and real estate brokers and retailers are playing a game of chicken-or-egg. Although a top priority is bringing more commercial fashion tenants to the area’s showrooms while cultivating the neighborhood brand as the fashion capital of the country, the BID is expanding its goals far beyond designer showrooms.

Without question, the focus of the commercial landlords is bringing more residential development to the district. With more residents and the creation of a 24-hour city, come more lifestyle-oriented retailers, restaurants and services. And with more services, come more commercial tenants. With more tenants, come more users for the amenities. And the momentum grows from there.

“In order to make the neighborhood trendier and hipper, you need to have a residential component. If you look at the better retail areas of New York, whether it’s the Meatpacking District, Chelsea or SoHo, that’s what’s helped those,” said Bob Savitt, president of Kaufman/Adler Realty, a major owner in the BID. “The commercial buildings are doing well, but you won’t get a great restaurant or retailer that can only do a lunch business.”

“The next phase has to be residential,” said James Buslik, principal at Adams & Co. Real Estate LLC, another prominent district owner. “With the growth of residential, the area will become a more exciting place to be both for retailers and businesses. The burst of residential starts every revitalization in the city.”

The district is on its way. A handful of high-end condominium buildings are popping up in the area, while bars such as Stitch — branded with a fashion district identity, of course — are literally overflowing with businesspeople and neighborhood locals. To bring more residential space to the area, several parties are working together to negotiate changes to the zoning laws, which currently require that half of the property in the area must be manufacturing. There is an exception to the rule when manufacturing space is made into showrooms.

“The showroom allowance is great because there is a resurgence of great showrooms on the side streets of the district,” said Ira Fishman, executive vice president of Winoker Realty. “But there’s not enough demand from tenants to fill up the whole district with showrooms. We need to have other uses for these buildings.”

The BID, along with private landlords, the Real Estate Board of New York, tenants organizations, industrial retention organizations and the garment workers union met recently to find a solution to the zoning laws, and according to Fishman, if they can come to a solution then the city will shepherd the changes through. The groups, however, have to broker a solution themselves.

“Revisiting the appropriateness of zoning in the area is critical going forward,” said Randall. “The modifications that could occur would enhance the 24/7 opportunities that exist here.”

The potential success of the public-private partnership in the fashion district is evidenced in other BIDs around New York. Union Square, for example, which formed a BID in 1983, has had a complete turnaround. The once crime- and drug-ridden neighborhood is now home to a Diesel store, Frédéric Fekkai salon, Whole Foods Market and bordered by restaurants such as Blue Water Grill and The Coffee Shop and the W hotel. The Union Square BID, instead of investing funds to attract new businesses, now runs the popular farmer’s market and organizes musical and cultural events in the park. At Bryant Park, the public space was so unsavory that commercial tenants used to pay more rent for windows that faced away from the park.

“We have so many ideas and proposals that are in discussion right now with the stakeholders in the neighborhood,” said Randall. “It’s an exciting time.”