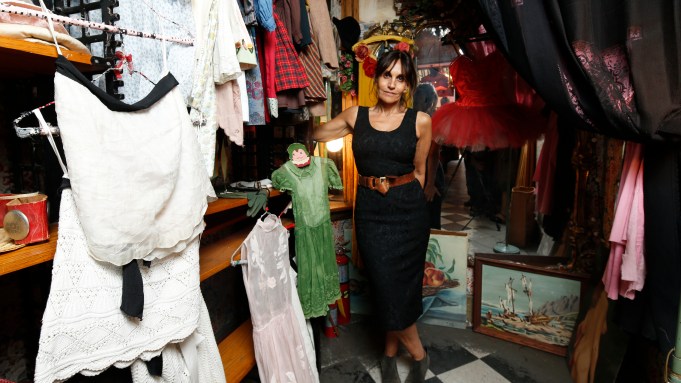 West Village frock purveyor Geminola will close by the end of May. Located at 41 Perry Street, the teacup-size concept boutique had cultivated a loyal following in its 12-year run. Its carefully curated, madcap display of reconstructed vintage clothing, housewares, accessories and distressed tutus are marked down at 50 percent off.

Geminola owner Lorraine Kirke — who opened the boutique without formal retail experience in 2004 — told WWD that her decision to close the shop is not based on a singular event.

“I just decided it was time to move on, the West Village is now just a completely different vibe. There’s just us [left] and the Perry Street Alcoholics Anonymous meeting….It used to be a village and I don’t think the West Village is a village now — it’s a place for billionaires,” Kirke said.

“I got divorced two years ago and had to sell the house and never got my [in-home] studio again.…I don’t have the space anymore and I didn’t have the visceral connection with it that I loved. Before, I was obsessed, but maybe I was filling the void for a bad marriage, which is funny, right? I was filling the void for a super bad marriage and maybe dresses were helping that, but then when it all went apart, I thought ‘Oh, I don’t need to do all this stuff.’”

West Village passersby and residents knew spring had arrived when Geminola would hang its airy print dresses outside its doors. An amalgamation of her three daughters’ names (Jemima, Domino and Lola), Geminola was an emporium of unique, feminine wares. Kirke would source vintage linens, laces, velvet and tulle, and transform them into magpie confections, accented with smatterings of antique floral appliqués and moiré ribbons. The one-off designs were strewn around the store, amid antique fixtures and curios — turning the shopping experience into that of a hobbyist pursuit.

The boutique received widespread recognition when Kirke’s designs were featured in “Sex and the City.” The pallid aquamarine tutu that Carrie Bradshaw wears in the series’ final episode was sourced from the store.

Adding to Geminola’s frazzled fairy dust ambiance was its cast of outré shop girls. The boutique was known as a breeding ground for young, cool, ambitious creatives — a large swath of which have moved on and found success in an array of fields, from film to styling. Lena Dunham worked in the boutique during college.

Said Kirke: “I have loved it all. I’m so grateful for the people who love this place and the fun and all the girls who came through here and worked here — I mean there’s got to be at least 100 of them, people who needed their first job, their college job.”

Kirke is now weighing options of what to do with the remainder of her lease in the space. She is considering subletting but, “Can’t imagine why some young girl wouldn’t want to come in and continue it — I’d love for someone creative to come in and take it over and keep it going.”