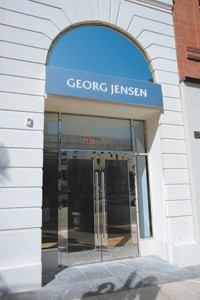 “Rodeo Drive is the window to the international luxury seat,” said Larry H. Barkley, president of Georg Jensen USA. “This is the final straw in announcing that we are an international luxury player. We knew the store had to be something magnificent. When you look at Bulgari and Louis Vuitton, they’ve done something out of the ordinary with each one of their stores, and we wanted to follow the trend and say we are the same type of player.”

The Danish luxury firm hosted a small reception in the space, followed by a larger fete at a poolside bungalow at Chateau Marmont that drew a disparate group of celebrities, from skateboarder Tony Alva to burlesque star Dita Von Teese.

The 2,100-square-foot store, designed by Tadao Ando, is the company’s 115th freestanding unit, including eight other locations in the U.S. The store gives off an aura of cool, with its undulating, translucent acrylic walls and streamlined rows of glass cases. The effect is heightened by the gradient shades of blue light emanating from 170,000 LED bulbs hidden behind the walls.

“I wanted to try to make the product look like it’s floating on the water, because I feel that humans are always seeking out beautiful objects in the water,” said Ando.

“I am always concerned with beauty and simplicity, just like Georg Jensen,” Ando said. “New fashions and trends come and go all the time, but to have a store for 100 years is really an amazing thing, especially in the design world. This is one that will last forever.”

Georg Jensen’s core silver jewelry collection starts at $250 retail, but in the last three years the company has added pieces in platinum, white gold and diamonds to elevate its luxury status. Those pieces start at $2,500 and go as high as $350,000.

For the first time, Georg Jensen has also created seven limited-edition diamond and white gold pieces — extensions of the Cascade collection — to sell exclusively at the Rodeo Drive store.

“In key markets such as Los Angeles, we want to provide stores with an edge,” said Hoejsgaard, adding that the 102-year-old company plans to concentrate its efforts on the Japanese and U.S. markets.

More stores are in the works for Hawaii, Florida and possibly Orange County in Southern California. The brand also specializes in watches, gifts for the home and office and cutlery.

According to the company’s annual earnings report, earnings before interest and taxes tripled in 2005 to 18 million Danish krone, or $3 million at current exchange rates, from a year earlier. Sales gained 6 percent to 838 Danish krone, or $141.4 million.