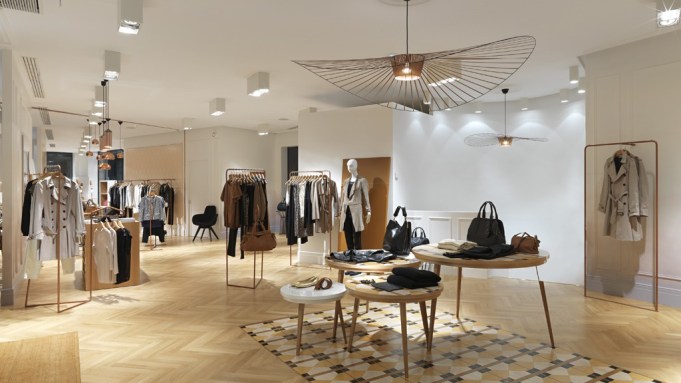 Since taking over as chief executive officer in August last year, Sandrine Lilienfeld has unveiled a new store concept for the French fashion firm, revamped its advertising campaign and brought on board creative director Brigitte Comazzi Duval to refresh its ready-to-wear collections.

“I feel like things are moving along at a fast pace,” Lilienfeld said in her office at Gerard Darel’s historic headquarters here, located in the same building as the new store that opened in late January. “Most companies require two years to give birth to a concept, and we did it in three months.”

The executive, who joined the company from the management helm of Naf Naf and succeeded Marianne Romestain, said she plans to restore Gerard Darel to its glory days of last decade, when Charlotte Gainsbourg was the face of the brand, lending it an aura of cool Left Bank style.

Lilienfeld noted that since its acquisition by private equity firm Advent International in 2008 and the subsequent departure of the founding family members, Gerard Darel had lost some of its edge.

“The fundamentals of the house are strong, and its identity and positioning in the accessible luxury segment clearly established. It also has extremely solid relationships both with overseas clients and with strategic partners in France such as Printemps, Galeries Lafayette and Le Bon Marché,” she said.

“So it was not a case of reneging on its fundamental values, but rather of making the organization more professional and emphasizing the retail culture,” Lilienfeld added. “Retail now represents three quarters of the group’s turnover, but the organization was still based on a wholesale model.”

Darel counts 81 directly owned stores in 40 countries as well as 180 department store concessions, in addition to its wholesale business.

On the style front, she noted the house’s collections needed sprucing up.

“The brand, in its roots, is extremely contemporary, extremely modern. As far as the collections go, I think once the founders left, people were scared to change things, so the collections did not evolve sufficiently,” she said.

Comazzi Duval, who will unveil her first full collection for spring 2015, said the line was not aimed at any specific age group, but sought to capture a spirit.

“This is a brand with a very strong DNA which had fallen asleep in recent times. My idea is to refresh it by making it a little bit more feminine, a little bit more fun,” said the designer, who draws inspiration from her Asian travels and can often be found combing vintage markets on weekends.

“Our clientele is very much a Left Bank, artist-intellectual type, so I really want to get back to that spirit, which was the essence of Gerard Darel 10 years ago,” Comazzi Duval added.

The brand has decided to take a break from using high-profile ambassadors, which in addition to Gainsbourg have in recent years included Robin Wright and Mamie Gummer. Its spring campaign by Driu & Tiago, shot in black and white, features French model Marjolaine Rocher against iconic Parisian backdrops.

Lilienfeld said Darel may appoint a new brand ambassador in 2015, but it would have to be someone exclusive to the brand. “Right now, a lot of people represent several brands at once. I think the house is wonderful and deserves total exclusivity,” she explained.

Reflecting the changes under way, the new store at 130 Rue Réaumur is an airy yet elegant space that houses the main Gerard Darel line, secondary collection Pablo and leather goods, including the brand’s best-selling 24 Heures handbag and newcomer Divine.

Lilienfeld said the concept would be rolled out to four of the brand’s existing stores in Paris this year, including its flagship on Rue Saint-Honoré. Its stores in Lille, France, and Brussels will also be renovated, and Gerard Darel will unveil new leather goods corners at Galeries Lafayette in April and Printemps in July or August.

It plans to focus overseas expansion on the strategic markets of Russia, the U.K., the U.S. and Spain. The brand is set to open three to four stores with its partner in Russia this year, including one in Saint Petersburg, to be followed by its first freestanding store in the U.S. and additional U.K. locations in 2015.

“I want to consolidate before developing,” commented Lilienfeld. “The development initiated via our partnership with Bloomingdale’s in the U.S. has been phenomenally successful. This winter, we became the number-two brand on our floor, right behind Burberry.”

International development is key to compensate for continued weakness in France, which accounts for 62 percent of total sales. Though she declined to provide figures, Lilienfeld indicated that Gerard Darel posted a loss in 2013.

“Like the rest of the sector, we had a difficult year with an unhelpful economic context and weather conditions. If department store figures are any indication, we fared somewhat better than our competitors. So it was not a year of growth in France. On the other hand, we did great business in the U.S. and Britain,” she said.

The executive is banking on a return to growth this year, noting that wholesale orders for the fall collection were strong. “I am forecasting reasonable growth in France and more ambitious growth in countries that are less affected by the crisis,” she said.