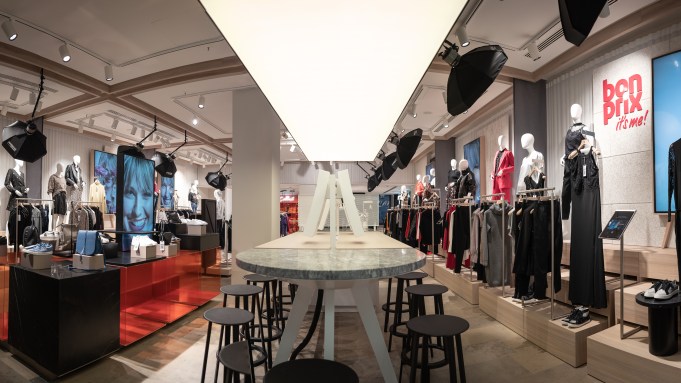 HAMBURG — Other fashion retailers may have dipped a toe into the digital waters, but Bonprix is jumping into the deep end.

Germany’s second-largest fashion e-tailer after Zalando today opens an ambitious concept store in its hometown, Hamburg, in premium retail territory. Bonprix managers say the pilot store, the fruit of three years of development, will offer a combination of online and off-line retail that has more in common with Amazon Go supermarkets than most apparel retailing.

It’s a first for Germany and Bonprix managing director and head of buying, marketing and retail Rien Jansen thinks it might even be unique in the world. “There are a lot of retailers doing bits and pieces,” Jansen said, referring to services like self-checkout kiosks, tablets in changing rooms and click-and-collect services. “But nobody is doing a 360-degree consumer experience like this,” added the executive, who has traveled the world looking for that special blend of brick-and-mortar and online.

With large logos, oversized video displays and a peachy color scheme, the new Bonprix store on Monckeberg Street looks similar to neighboring outlets like Zara and H&M Home. But the experience is very different. As with the Amazon Go supermarkets, when customers enter the store, the first thing they will be asked to do is “check in.” They do this by opening the Bonprix app on their smartphones, they then register their presence with one of three in-store scanners. “It’s just like at the airport,” Bonprix retail chief Daniel Füchtenschnieder explained to WWD.

Compared to neighboring stores, this retail space feels oddly empty. Bonprix sells more than 20,000 items online, at a median price of about 25 euros, but only 350 are displayed in store. Only one sample of each garment hangs on the racks. Interested in that leopard-print top? Want to try it on? Scan the digital tag using your phone and select a size. The tags feature RFID codes — known as “smart labels.”

You could keep on shopping and add garments — or, if you like, you can head downstairs, past Bluetooth-enabled lockers for click-and-collect services and a lounge complete with tablets for waiting partners and children, to try that top on.

Select that option on the Bonprix app and a wheel begins to spin onscreen: “Elisa is working on this,” it tells you. A couple of minutes later — the average waiting time is five minutes — the app instructs you to head for changing room number seven; there are 12 rooms altogether. Open the door and the garment you requested, in the right size, is already waiting there.

The changing rooms are more spacious and air-conditioned than most and Bonprix testing shows that customers spend an average of 14 minutes inside. The mirror allows you to choose lighting, including beach, daylight, evening or a particularly unforgiving spotlight, if you really want to check for flaws.

Wrong size? No problem, just click on a digital display and request another. Now you wait. You may or may not hear something rustling behind the wall. But within less than a minute a sealed compartment in your cabinet slides open to reveal the same garment again, in the size you wanted.

There might be an army of stylists rushing around behind these walls, lugging armfuls of jackets, pants and leopard tops. But if there is, you’ll never know. Neither Jansen nor Füchtenschnieder is telling. For one thing, they insist this is part of the magic of the experience. For another, the inventory and stock-control process has been specially developed by Bonprix. There are human staff involved but Jansen describes the stock control as “semi-automatic.”

For the time being, further information on this proprietary process won’t be available, although other stores in Bonprix’s parent company, the Otto Group — one of the largest online retailers in the world with revenues of 13.65 billion euros, including 7.9 billion from online commerce — may eventually get to share it.

Back to that leopard-print top. You like it enough to purchase so you now put it in one of the branded paper totes in your fitting room and head upstairs. You could check yourself out using a standard payment terminal with a credit or bank card. You can even pay cash. But you could also simply walk out of the store without another thought. If you’re using your own phone, you will be charged for the garment, its security tags now disabled. The store accepts everything from Google Pay and Apple Pay to PayPal, and hopes to add China’s Alipay soon.

This “customer-centric journey,” as Jansen and his colleagues describe it today, is the result of a long learning curve, many experiments and a major investment — although the company won’t divulge exactly how much it has cost. Bonprix was launched 33 years ago as a discount shopping catalogue, but has had its own web site since 1997. Today, around 85 percent of the company’s business is e-commerce and it only has a handful of stores. In 2017-18, the company had a turnover of 1.56 billion euros and more recently it has tried to distance itself from discount and re-brand as a “digitally driven fashion company” with its sights on the “girl next door.”

The team of software developers, merchandising specialists, inventory experts and user-experience consultants that worked on the Hamburg store started with 80 potential digital services, then whittled that down to just seven. Solutions were needed for some gnarly problems: For instance, how to separate the garments in different fitting rooms. After all, nobody wants to be accidentally charged for the dress a stranger in the next room is trying on. In the end, a special signal-blocking paint was used on the changing room walls so all accounts remain separate.

Since then, more than 300 test customers have worked their way through the racks and most have coped well with the technology. If all else fails, actual humans are also there to advise.

“This [store] is a risk and this project needs to be proven,” Jansen said. “But I believe that in the future we all need to think very differently about what it means to have a store. I believe in retail, but it will be radically different,” he continues.

Online will never completely replace brick-and-mortar because “we are social animals,” Jansen argued. “We want to see each other, to have experiences. So people will still want to go shopping. But they won’t want to stand in queues or see a warehouse stuffed with product. They want to shop how they want, when they want. I am convinced. The seeds of this are already here.”