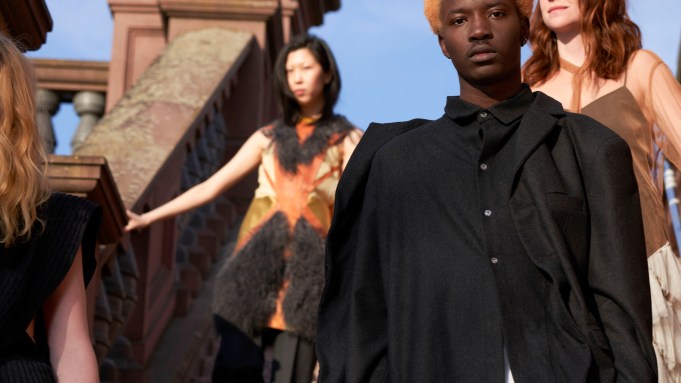 The announcement of the event caused waves in mid-2020 when the local industry was informed that the fashion trade shows that drew most of the commercial visitors to Berlin Fashion Week were departing, moving from the country’s arts, culture and nightlife capital to Germany’s more conservative, financial center, Frankfurt. The shows leaving were the Premium fair for high-end mainstream brands, Seek for streetwear and Neonyt for eco-friendly wares. The less commercial aspects of Berlin Fashion Week were staying put.

Since then, the Frankfurt event’s organizers — Premium Group, managers of the Premium and Seek fairs, and Frankfurt Messe, one of the world’s largest convention organizers who put on congresses around the world and who own Neonyt — have been busy.

One of their organizational coups is a partnership with the Conscious Fashion Campaign, which works with the United Nations, “to accelerate global industry engagement…to deliver the Sustainable Development Goals by 2030.”

The Conscious Fashion Campaign is a presenting partner for Frankfurt Fashion Week and there will be a Sustainable Development Goals summit during the July congress.

By 2023, aligning with sustainability goals will be a prerequisite for all exhibitors in Frankfurt. Those who don’t may find themselves without a slot there, explains Anita Tillmann, managing partner at Premium Group. “We can’t expect that everyone does everything right around this topic but we can expect that we will all be working together toward common goals,” she told WWD.

Like most fashion weeks over the past year, the upcoming Frankfurt event will be a hybrid affair, Tillmann added, with some events happening in real life and according to pandemic lockdown rules, and others online only.

Due to the pandemic, Tillmann doesn’t think trade shows will ever look exactly the same again. “The whole [trade fair] industry has had to rethink things,” she told WWD. In some ways, the enforced digital nature of conferencing has been useful, she noted, with more efficiency, savings on travel and useful lessons for companies who were not yet fully online. All of the proceedings in Frankfurt — whether runway shows or talks — will be available on a single online platform, which will continue to broadcast all year, she added.

“But on the other hand, you need a place where the industry meets. It’s a very emotional business, deals are often done in person” Tillmann said.

Runway shows for the general public and industry insiders have been planned in Frankfurt, along with live showcases of all kinds. That includes a series of pop-up activities under the umbrella Skate Week, or Sktwk, which was to include skateboarding sessions, art exhibitions and parties in the city.

As yet, it is not totally clear how the pandemic will impact things, Tillmann said. This week, news reports suggest the German federal government may be considering extending the lockdown, which has only partial retail openings, until June and may even be talking about toughening measures further if the rate of infections in Germany continues to rise.