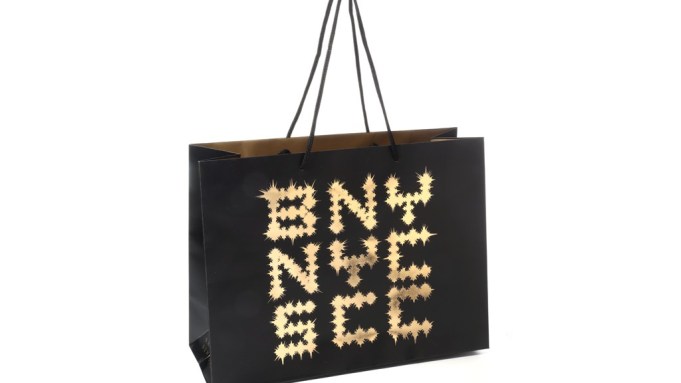 Barneys New York is in an Empire State of Mind for the holidays.

The luxury retailer has partnered with Shawn “Jay Z” Carter for a high-wattage promotion, dubbed “A New York Holiday,” that has the musician collaborating on a range of offerings with top designers and influential indie brands to fashion a collection of limited-edition holiday products. Among the participating labels are Lanvin, Balenciaga, Balmain, Proenza Schouler, Rick Owens and Moncler, who all worked with Jay Z on custom creations. In a nod to the rapper’s recent headfirst dive into the contemporary art market, the store will be called BNY SCC Gallery (short for Barneys New York and Shawn Corey Carter, respectively).

“With this project, Barneys New York and I were able to take the slickness, energy and innovation of New York City and translate that into quality, timeless pieces,” Carter told WWD. “Everything that encompasses ‘A New York Holiday’ — the items chosen, the amazing designers that participated, the windows, the design of the BNY SCC Gallery — represents a perfect example of a unique and groundbreaking collaboration that I hope demonstrates how inspiring New York has been to me.”

The exclusive designs will be on sale Nov. 20 through Jan. 3 at the Barneys flagships in New York, Beverly Hills, San Francisco, Boston and Chicago, as well as on barneys.com. A limited quantity of pieces will be available for preorder prior to Nov. 20 on the e-commerce site. Twenty-five percent of all sales from the project will go toward the Shawn Carter Scholarship Foundation, which is marking its 10th anniversary this year.

“We decided that we wanted our holiday to center around New York City. But not New York in the literal sense — New York as the creative and cultural epicenter of the world. We wanted to capture the energy, its stories, the art, the fashion, its people,” said Mark Lee, chief executive officer of Barneys. “If you close your eyes and think about who best represents New York and stands for the city, you can’t help but think about Shawn Carter. Jay Z is a born-and-bred New Yorker, and one of the biggest cultural icons of our time — his reach spans across music, sports, business and fashion. He embodies so much that is ‘New York.’ He is a creative force and an entrepreneur. The decision to partner with Jay Z was an easy one — he shares our sensibility, passion and love for New York.”

The collection includes a black leather backpack from Balenciaga, a black square-print scarf from Balmain, a hoodie from Rick Owens, a tailored jacket from Lanvin, a black leather duffel with faux crocodile trim from Proenza Schouler and an 18-karat-gold double ring from Hoorsenbuhs. Though a majority of the brands involved worked on a single piece, a few explored further territory. The Elder Statesman, for example, created a black-and-ivory color-blocked cashmere blanket as well as a cashmere ski mask. Jay Z conceived the entire range within a white, black, silver and gold color scheme.

By all accounts, the partnerships came from a place of mutual admiration.

“This is my first collaboration, as my rain project is quite new,” said Stutterheim creative director and founder Alexander Stutterheim, who crafted a raincoat with gold snap buttons for the assortment. “Initially, I had intended for it to remain a solo project because I did not want anything to compromise my ideas and design, but I have always appreciated Jay Z’s unique creativity. He also seems like a nice person, husband and father, which is just as important to me.

“I have been working on this coat in my small wooden cabin in Stockholm,” Stutterheim added. “I came up with a few ideas that I sent to Jay Z, and he had a great response to them. After a couple of prototypes, we got it just the way we wanted it. Thankfully, Barneys also gave us the freedom to create this coat as we liked and it has truly been a beautiful collaboration. At the same time, I hope people don’t think too much about who made this coat but rather judge it on its own look and character.”

Jack McCollough and Lazaro Hernandez of Proenza Schouler crafted their first men’s bag for the line.

“Jay Z is such a unique character. Collaborating with him and Barneys felt like the ultimate New York partnership,” the duo wrote in an e-mail.

“It was a great pleasure to work with Jay on this special collaboration,” said Alexander Wang, who was enmeshed in work on the upcoming Balenciaga show.

Much of the product is geared toward male customers, but there are dual-gender and home items that should appeal to a spectrum of shoppers, such as the ring, scarf and cashmere blanket. The collection also includes a cigar humidor, eyewear from Cutler & Gross and other designs from Hublot, T. Anthony, Acne, EN Noir, Roc Nation and Just Don.

The price range reflects the product mix. A Barneys cotton T-shirt will retail for $70, while the Stutterheim coat is $675. On the high end is the Shawn Carter by Hublot 45 mm watch with black alligator straps, deployment buckle and yellow gold movement for $33,900. The timepiece is also available in polished black ceramic for $17,900.

Barneys will center the promotion at its Madison Avenue flagship with a 1,500-square-foot, self-contained gallery installation on the third floor of the men’s store that will showcase the collection. It has recruited the video artist Joanie Lemercier to oversee works by himself and others that will be projected 360 degrees on the surfaces of the enclosed shop via a setup created with the Cypress, Calif.-based projector firm Christie Visual Solutions. New York firm Sagmeister & Walsh designed shopping bags.

“It was important to keep the color palette for the campaign simple and representative of our vision of the New York City skyline at night,” said Barneys creative director Dennis Freedman. “In sitting and talking with Jay and Joanie together, we were able to take our abstract concept and actualize it within our store. The immersive environment we’re creating in the store and in the windows reflects a shared design perspective with direct inspiration from Jay’s life.”

The collection and related windows will be unveiled on Nov. 20 at the Madison Avenue store. The same night, a fund-raising event for the Shawn Carter Scholarship Foundation will take place at an off-site event space, hosted by Barneys and Jay Z. The Shawn Carter Scholarship Foundation is overseen by ceo Gloria Carter, Jay Z’s mother. The organization focuses its work on young people who may be overlooked by other scholarship programs, such as students who have earned a GED, have previously been incarcerated, have low grade-point averages, are single mothers or children enrolled at alternative schools. Last year, the foundation awarded 188 scholarships. Half went to first-generation college students.

“Jay is a natural creative collaborator who knows what he likes so the process came easy. There were several meetings with him where he shared his ideas and visions as to the product categories and designs,” said Lee of the project’s execution. “We took his feedback and proposed designers to bring his ideas to life. I have to say that he is extremely on-point when it comes to design and the execution of his ideas.”

“A New York Holiday” is the latest in a series of high-profile holiday promotions undertaken by Barneys. Last year, the retailer partnered with The Walt Disney Co. on “Electric Holiday.” In 2011 it linked with Lady Gaga on the “Gaga’s Workshop” campaign. Both projects led to record-breaking December sales at Barneys, said Lee.

“Through our holiday programs, we always try to come up with innovative, surprising, witty partnerships that speak to and engage our customers — and we certainly achieved that with both the Gaga and Disney campaigns. ‘A New York Holiday’ differs from both of those campaigns, but the end goal is to create a holiday experience for our customer that is both fun for the holidays, unique, unprecedented and engaging,” said Lee.

Each of the attention-grabbing holiday programs has taken about a year in advance to plan. Key players include Lee, Freedman, executive vice president of marketing and communications Charlotte Blechman and members of their teams.

“We try to think outside of the box when it comes to our holiday campaigns, and always surprise our audience,” explained Lee. “Because these projects have so many different layers — from windows and creative to merchandise and marketing to in-store planning — all of the teams play a key role in the execution. Every aspect of the company gets involved in holiday at some point or another.”