The fully renovated and expanded boutique is located on Via Sant'Andrea, which housed Armani's first store in the city, opened back in 1983.

The facade of the new Giorgio Armani store in Milan

MILAN — Giorgio Armani thinks “the time had come to return ‘home,’ in a certain sense.”

The designer on Thursday unveiled a new and unique concept for his fully renovated and expanded boutique in Milan’s Via Sant’Andrea — a special location in his heart, as it housed his first store in the city, opened back in 1983. In 2008, Armani moved this flagship to the nearby tony shopping street of Via Montenapoleone (now closing), and the Via Sant’Andrea unit housed the Armani/Casa range from 2010 until 2017.

Nestled between the stately Milanese palazzos and opposite the frescoed 17th-century Palazzo Morando, the flagship stands out on the elegant street with a new facade featuring a restyled base in a special green granite and a striking platinum finish on the upper levels.

Recalling the opening in 1983, Armani told WWD that at the time he was “encouraged by the international success that had taken me by surprise the year before when I was featured on the cover of Time magazine. I felt the need to further express myself by selecting a retail space that reflected my philosophy, and this led me to open the boutique in what is still today a discreet street in the Fashion District.” 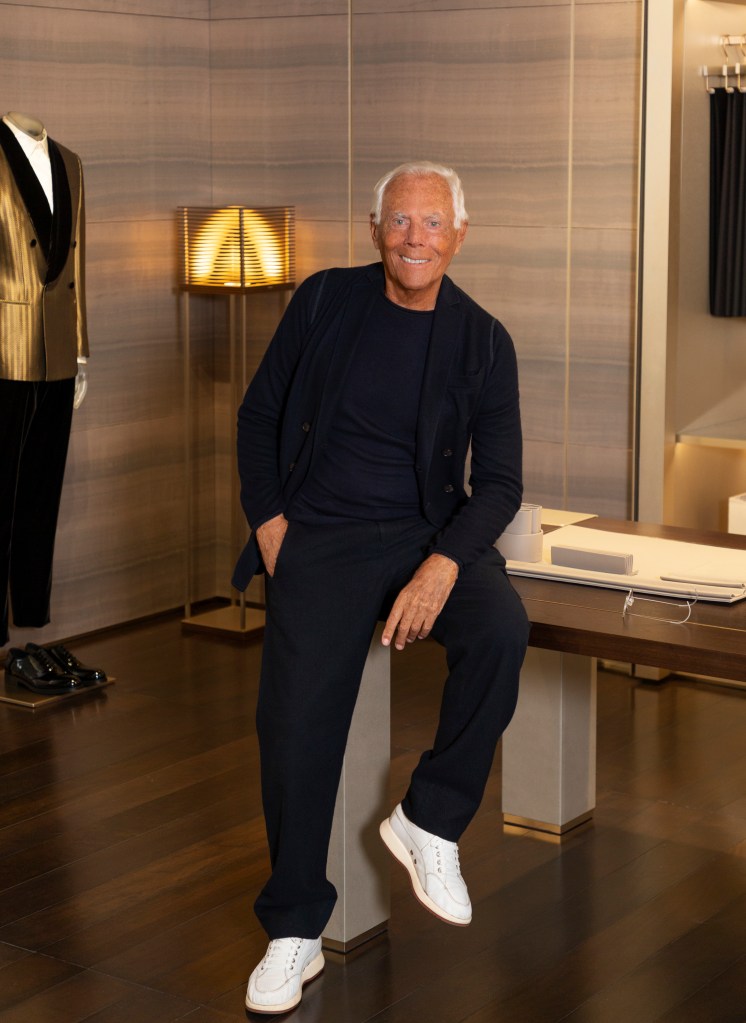 Giorgio Armani in the new Via Sant’Andrea flagship.  courtesy image

Armani sees “the past interwoven with the present” on Via Sant’Andrea, where stately buildings now house the windows of international brands, from Bottega Veneta to Chanel. He underscored the return “with a different offer” and “without any feeling of nostalgia” is reflected by the new store concept. “I wanted the epitome of my vision of timeless beauty to interact here with the contemporary dimension. I want to offer my customers a comprehensive space that allows them to experience the Giorgio Armani world to the full, from accessories to prêt-à-porter, and from my emphasis on craftsmanship to personalized services and the focus on attention to the needs of the customer.”

Doubled in space, covering four floors over a total area of 12,960 square feet, the location allowed Armani “the freedom to create a special concept, making use of unique elements, such as the glazed space — for displaying special collections — or the spacious area in the basement designed for presentations to customers. Into this rich, mixed environment, I added connecting elements typical of my visual language, such as the straight staircases in Velluto Onyx and the chromatic colors blended with light gold and platinum tones. The presence of the large interactive video screens is a sign of my constant attention to the modern world.”

The entrance is quite unique, with a sort of glassed gallery displaying a selection of clothes and accessories, which basically multiplies the number of windows on the street. 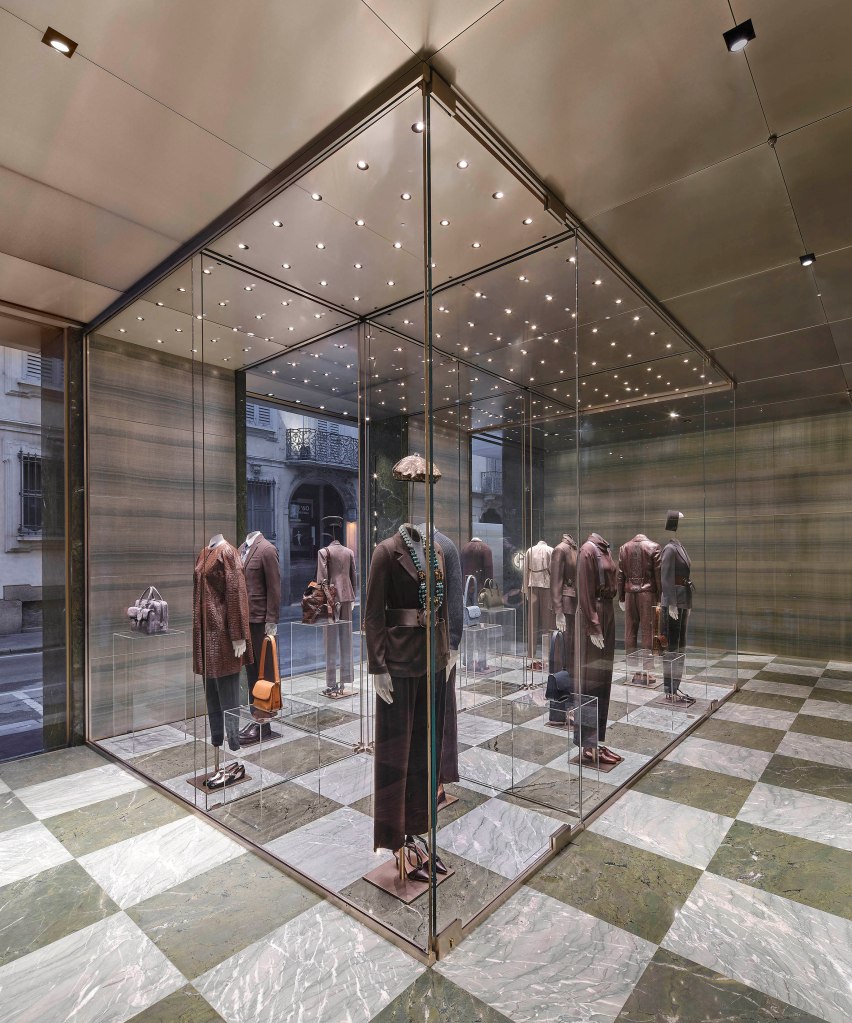 The entrance of the Giorgio Armani flagship on Via Sant’ Andrea in Milan.  Beppe Raso

The checkered flooring is luxurious throughout the boutique — playing with a favorite Armani pattern — in polychromos onyx and marble, and coordinated with the silk wall coverings and the ceiling, which echo the colors and veining of the various different areas within the boutique. 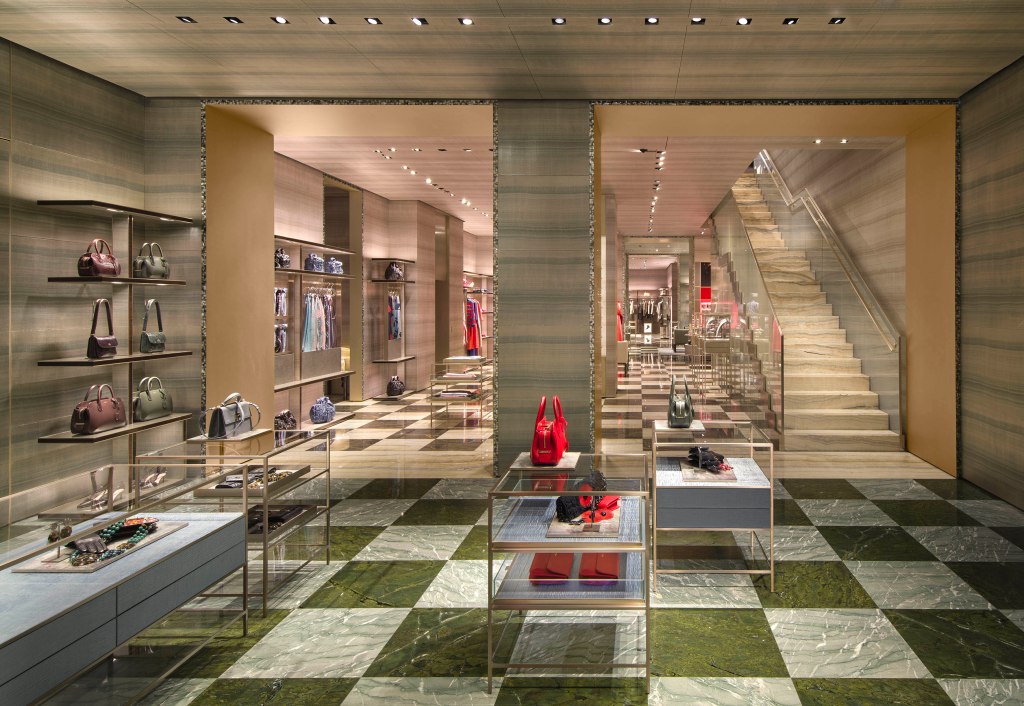 The rooms are connected by platinum colored doorways with mother-of-pearl trims. Dark edges in eucalyptus wood — typical of the Thirties and Forties — define the shapes of the linear perimeter furnishings.

The interiors are decorated with Armani Casa designs, such as tables in resin with a fabric effect and platinum colored metal, always coordinated with the surrounding color scheme. Small tables in pear wood and mother-of-pearl, inlaid by hand by Italian artisans, contribute to the sophisticated, uber-luxurious venue.

Women’s apparel and accessories, including eyewear, as well as a beauty area with a makeup station stand on the ground floor. Men’s wear, including formal outfits, and accessories are positioned on the first floor. Special collections are presented in a space resembling a winder garden with its see-through walls screened by thin gold-tone mesh and surrounded by a bamboo pattern, a reference to the designer’s love of the East and its landscapes. This also contributes to the natural light that is emphasized throughout the store.

Eveningwear, the Made to Order and Made to Measure services are available on the second floor. 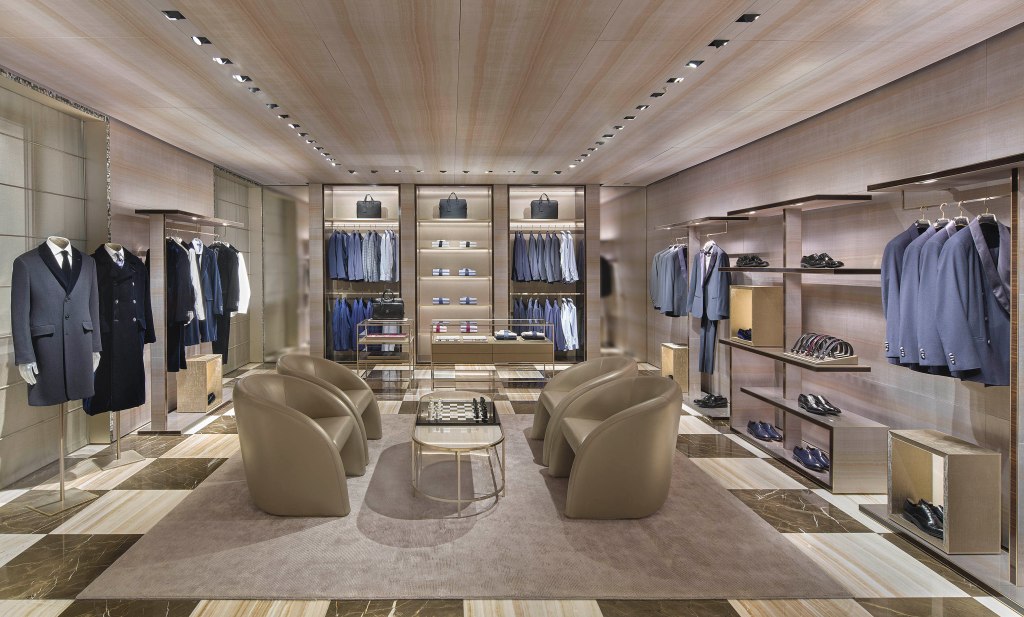 Four French windows look out onto the skylight of the glazed area below and from this floor, which looks out onto Via Sant’Andrea, customers can admire the beautiful Baroque frieze on Palazzo Morando.

Video walls are installed at each level, in addition to the four interactive ones in the entrance area, to show images of the season’s collections and create an impression of dynamic movement. The various floors are accessed via straight staircases, clad throughout in Velluto Onyx with gold metal, distinctive details — a reference to a typical Armani design.

At the basement level, there is a salon for presentations, with 78 seats surrounded by the softness of the veining of Velluto Onyx and walls in silk in matching color.