A new hypermodern luxury retail hub, 65 Croisette, has opened on the fabled Croisette here in the latest development to bolster the Riviera town's efforts to become a new French shopping mecca. 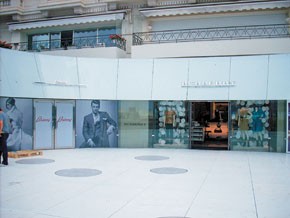 CANNES, France — A new hypermodern luxury retail hub, 65 Croisette, has opened on the fabled Croisette here in the latest development to bolster the Riviera town’s efforts to become a new French shopping mecca.

In the form of a squat inverted U, a porous Perspex hood runs around the 300-foot perimeter of the curvaceous glass complex, designed to keep stores cool but light by day, and turning translucent at night. One of the site’s end walls features vegetal climbing gardens sown with wild grasses.

The Gucci Group’s Balenciaga and Bottega Veneta brands are already operating in the space, joined by Jimmy Choo and Burberry, situated in the middle of the area’s central white forecourt. Pucci, Paule Ka, Brioni and Yves Saint Laurent are due to open units by September.

“We deliberately chose a diverse range of brands, from Balenciaga [as a niche fashion brand], to Burberry, which holds men’s, women’s and children’s clothing as well as leather goods,” said luxury agent Robert Van de Kerkhove, who conceived the project with real estate developers The Codic Group and Holdinvest.

Between sun-seeking holidaymakers and the town’s numerous congresses that draw tens of thousands of professionals throughout the year, the space, designed by Moatti & Riviere, is geared to satisfy a broad high-end clientele, he said.

Cate Blanchett, Gwyneth Paltrow and Woody Allen’s wife Soon-Yi Previn are said to be among celebrities spotted shopping in the space during the Cannes International Film Festival last week. “Cannes is now [a key French] shopping destination where one can easily fly to have lunch in the sun and then do a spot of shopping,” said Van de Kerkhove. “It’s become the new capital of the South of France.”