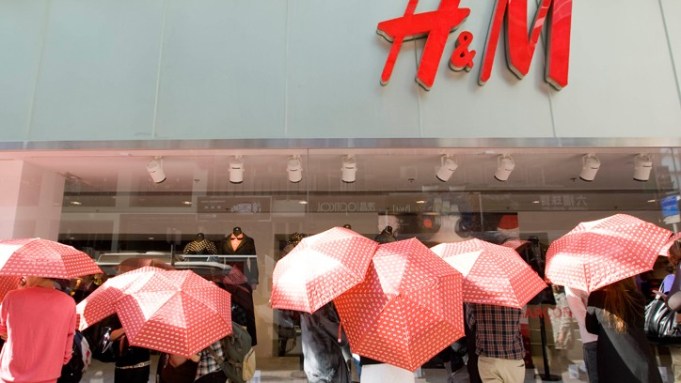 After the frenzied debut last weekend in Tokyo of its Comme des Garçons guest designer collection, H&M on Thursday gave the rest of the world a chance to see what all the fuss was about.

Large crowds queued up for the launch in Paris, London, Milan, Hong Kong, Shanghai and Manhattan. Shoppers stampeded into stores, but once inside, the scene in several cities seemed slightly more civilized than previous guest designer launches by Karl Lagerfeld, Viktor & Rolf and Roberto Cavalli.

The Comme des Garçons collection bowed on Thursday in 200 stores worldwide, including eight overall in the U.S. and three units alone in Manhattan: 640 Fifth Avenue at 51st Street, 731 Lexington Avenue at 59th Street and 1328 Broadway at 34th Street.

An H&M spokeswoman estimated that about 200 consumers were lined up outside the Fifth Avenue flagship at 9 a.m., when the doors flung open. Some had been waiting since 11:30 p.m. Wednesday.

The Fifth Avenue flagship seemed less chaotic than Cavalli’s introduction, where customers climbed onto displays and ripped the clothing off mannequins. Anticipating a repeat, H&M had associates stationed next to the models.

“There’s a more targeted customer for [Comme des Garçons,]” the spokeswoman said, noting the collection consists of 30 items for women and 20 for men. “So far, the launch has exceeded our expectations.” By 9:30 a.m., she said the dress, the highest-priced item at $349, had sold out. “This time we’re limiting customers to buying only two pieces of any style.”

Jenny Liu, an art student, was weighed down by a pile of clothes she was carrying. “It’s all for myself,” she said. “I haven’t shopped for clothes in six or seven months. I’m a huge fan of Comme des Garçons. I bought one piece from the regular collection, on sale, for $900. I’ll probably buy 15 pieces for that amount.”

“The women are vicious,” said Donna McDonald, referring to fellow customers. Carrying a stack of polkadot sweaters, white blouses and black pants, she said, “I’m prepared to spend $800. I took a vacation day from work today to do this.”

Jeremiah Griffiths, a clothing designer, spent $2,000 on clothing for himself and friends. “The quality is not that good, but it’s good enough for the price,” he said. “I wanted a few women’s pieces that were sold out. I thought it would be crazier than this.”

Things got pretty crazy in Paris, where tempers flared in the chill outside H&M’s Boulevard Haussmann flagship when several people jumped the queue, angering those who’d waited for hours. “It was crazy,” said fashion student Hadar Nornberg, 24. “It was violent. The people behind were pushing us against the door.”

Within minutes, polkadot cardigans had to be restocked and the short black pants sold out within a half hour. Helene Fudala, 27, an engineer, took the day off from work to shell out 1,000 euros, or about $1,250, on jackets, shirts and a strappy black dress.

Across town, applause erupted at H&M’s Les Halles site when the doors opened and the crowd rushed in. “Hardly any French people know the brand, they’re just flinging themselves randomly at anything they can get their hands on, then they’ll return it all,” said Japanese fashion designer Aki Kihara, 40, who bought polkadot T-shirts and cardigans, grabbing four of each style, calling them “collector’s items.”

“The ad campaign was absolutely stunning and captured the brand’s spirit, but the collection is maybe a little less creative,” noted Marie-Claude Veney-Pérez, a psychologist, who was on line since 7:45 a.m. “There was nobody here before 9 a.m. I’m surprised by the low turnout, but it’s a lot less flashy than something like Cavalli.” An eclectic mix of cool Japanese kids, schoolgirls, middle-aged ladies and eBay looters waited for the doors to open at 9 a.m. at H&M’s Regent Street flagship. The shopping seemed less frenetic and more civilized than the Swedish retailer’s previous collaborations. “I’ve queued since 12:30 a.m. for some [sneakers],” said film student Huruki Mori, 21, who was first in line.

“It’s great that it makes Comme des Garçons affordable,” said Elaine Jevens, 65, who said she fell in love with the brand when she worked at Liberty and bought 294 pounds, or $433 worth of merchandise.

One shopper, who declined to identify himself, scooped up a number of dress coats for 1,204 pounds, or $1,775, and said he planned to sell the items on eBay.

Drizzle didn’t keep the crowds away from H&M’s flagship on Piazza San Babila in Milan, where employees offered pastries and orange juice to those in line. “The first things to go were definitely the trenchs and jackets,” said sales manager Alessandro Diliscio. “The white puffy shirts are also really popular.”

Donato Angrisani, who works with H&M on launches in Italy, said the crowd was less intense than those of the Karl Lagerfeld and Viktor & Rolf events. “However, there are more people than I expected,” he said. “I’m very pleased with the result.”

It was a fashion feeding frenzy in Hong Kong, where 450 people waited to enter H&M’s Central flagship. Lines also formed at two other Hong Kong locations. Shoppers at the Central store cleared the racks of blouses, jackets and trenchcoats within minutes, but the dress was slow to take off. The Central store carried 5,000 pieces, most of which were expected to sell out within hours.

After months of aggressive advertising here, H&M’s Huaihai Lu Shanghai store opened its doors at 9:30 a.m., half an hour early. “As soon as we opened the doors, people flooded in and the stock was wiped out,” said Lex Keijser, H&M’s country manager for Greater China.

“They sent much more to Hong Kong and Japan, where salaries are higher,” said Chen Hou, fashion editor of ILook magazine, who obtained a suit and trenchcoat by bartering with fellow shoppers after the initial melee. “They don’t know the market here that well.”

Adrienne Peh, a Malaysian advertising executive, bought a suit, but complained about the short supply. “One guy was holding on to a bunch of shirts and, before he had even bought them, he was selling them off for 200 [yuan, or $29.29] each.