For retailers and brands, Google’s product listing ads, or PLAs, are one of the biggest online sales-driving opportunities. 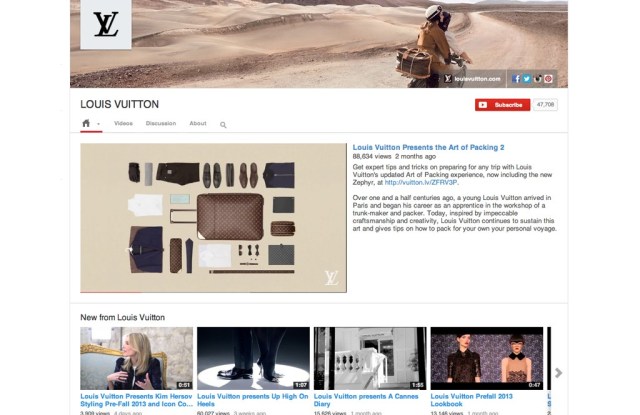 Apparel is the fastest-growing category in terms of shopping search volume on Google, and for retailers and brands, one of the biggest sales-driving opportunities is Google’s product listing ads, or PLAs.

This metric has caused brands to come to terms with the reality that potential shoppers spend such an abundance of time online, and data continues to illustrate exactly how consumers spend this time. Now, organizations are intersecting their brand message to play to that, Zeug said.

Clothing and shoes is the top PLA category for advertisers in the U.S. — and companies like Wal-Mart, eBay, Macy’s, Amazon and even Etsy have become increasingly aggressive in this space.

Etsy’s project manager, ads, Jay Bergesen, told WWD that PLAs have resulted in 40 million visits directly to listings since the marketplace began utilizing the ad format in September. About a third of these visitors were new to Etsy’s, home to more than 900,000 businesses.

And there’s data to support this. Research indicates that organizations are pumping more of digital marketing spend into search-engine marketing and e-mail. New York University think tank Luxury Lab, or L2, reported July 10 that search drives 45 percent of stores’ average Web traffic (including paid and organic searches). In “The State of Retailing Online 2013: Marketing & Merchandising,” a study released last Tuesday by Shop.org and Forrester, retailers are dedicating 55 percent of online marketing spend, on average, to these areas.

“When you talk to competitors of Google, they are concerned. Investors thought it was bloated and a behemoth stock — they had the perception wrong about how innovative it was,” Pitz said of Google’s stock price’s increasing by more than 50 percent since this time last year, when the stock closed at under $600. “It’s been our favorite game the past year because it’s been undervalued. Google is disruptive in so many ways.”

Google released second-quarter earnings Thursday — and although it reported revenue of $14.11 billion, 19 percent higher compared with last year, the number came in lower than the $14.46 billion projected by analysts. Earnings per share were also lower than expected, hitting $9.56 — well short of the $11.24 expected by analysts. The stock reached an all-time high of $928 earlier last week — and many speculated it would soon hit $1,000. Following earnings, the stock dropped and closed at $896.59 on Friday. Cost per click contributed to the revenue miss, as well as a solid adoption of Google’s Enhanced campaigns (75 percent of active ad campaigns are tailored to reach user-based metrics like location and device type, and as of today, remaining legacy campaigns will see an automatic upgrade).

Last week, Jefferies & Co. reported that there’s been a 410 percent increase in the number of PLA advertisers from spring 2012 to June 2013, with 145 percent growth in the total number of ads.

“Advertisers don’t want to put all of their money into Google, but if you care at all about ROI, it’s the best determinate of ROI — whether it’s desktop or mobile,” Pitz said. The firm also speculated that the high volume of Enhanced campaigns might have resulted in marketers turning to lower-cost-per-click ads, in turn resulting in more robust paid-click growth, which saw a 23 percent increase year over year.

Google head of industry, branded apparel and fashion, Lisa Green contends that tens of thousands of merchants — a small merchant to the biggest luxury brand — participate in Google Shopping and use PLAs. There are more than 1 billion products listed, and millions of searches are conducted on Google Shopping globally every day. As of November, 360-degree view launched on Google Shopping for the holiday season, and Tory Burch implemented the tool earlier this month to enhance the brand’s presence on the channel.

“A lot of the innovations you see from Google are rooted in [questions like] what is the consumer doing? What does the consumer want from us? Seeing how users are using the Internet, what videos they are watching, is how we help brands,” said Green. “All evolutions come from us seeing what consumer needs are. It’s a utility that we’re providing for the users to find what they’re looking for and for brands to show what they want the user to see.”

But what about luxury brands?

“Historically, luxury goods don’t want to be online. The Internet was considered a discount channel,” Pitz said, adding that while a consumer might likely see a Louis Vuitton bag show up in a search, the LVMH Moët Hennessy Louis Vuitton-owned brand will most likely not be buying Google PLAs in the near future.

Louis Vuitton does, however, maintain a channel on Google’s YouTube, where it has almost 48,000 subscribers. Its ad campaign short, published in November last year, has received more than 20 million views to date. A video from Louis Vuitton’s “Art of Packing” series this spring received 88,000 views.

Then there is Burberry, which will unveil the latest iteration of its Kisses campaign via Google’s new ad format Lightbox later this month, a type of interactive display ad that launched in March.

As part of the engagement ad formats — where advertisers pay only when a user engages with the ad — the format takes the Kiss experience and places it within Google’s ad networks. No matter where the consumer is, they can roll over the ad, expand it and send a kiss. The content lives on Burberry’s Web site at kisses.burberry.com, and digital ad units powered by Google on desktop and mobile screens, including YouTube (where its channel has almost 74,000 subscribers and a video can get several hundreds of thousands of views).

Other high-end brands — Chanel and Calvin Klein among them — have significant followings on YouTube, where about two-thirds of the audience on the platform is “fashion and beauty targets,” according to Zeug. Chanel has nearly 111,000 subscribers and Calvin Klein 17,800, where its Push Positive underwear video starring Lara Stone has been viewed almost 10.9 million times.

But for Tom Forte, managing director and Internet analyst at Telsey Advisory Group, there is still a “curve ball” where fashion and Google intersect. A debate consumers are now faced with when they intend to make a purchase is do they start at Google or do they start at Amazon? Although he understands the appeal of PLAs from the perspective of the company trying to sell the merchandise, he speculates to what extent consumers actually start their journey on Google.

“I’d argue that for a lot of people Amazon is a starting point. They go straight to Amazon — they search there and buy. I think some people never make it to Google in the first place,” said Forte. He adds that another challenge for Google (and Amazon) is providing the most relevant search results.

On the flip side, advertisers do recognize that Google is the leader in market share and the most trafficked channel in the search category. “It provides luxury brands an opportunity to leverage the most used search engine [in] the Internet space and get some prime real estate. They [PLAs] are in your face and visual,” he said.

With the industry abuzz about the launch of Google Glass next year, Forte doesn’t believe Google will transform into a product company the way Apple has. He calls Glass a “means to consume and search.

“The beauty of Google is that they know how to monetize search traffic. So if they can arm a consumer with a device that will help them search more — Glass, a tablet, etc. — that drives the engine, and that’s a powerful engine. Google is all about info, and it’s just another way for you to access info on the run,” Forte explained.

Green calls the future for Google Glass, which is still in the midst of its trial Explorer program before introduction into the market next year, “wide open.”

The product generated buzz when it appeared on the runway at Diane von Furstenberg’s spring 2013 show during New York Fashion Week in September of last year. As one of eight Glassware partners, Elle was among the first women’s consumer fashion publication available on Glass, and Marie Claire’s creative director Nina Garcia is one of the product’s most recent Glass Explorers.

“It’s still early days, and through things like our Explorer program it will continue to improve as more people use the technology,” Green said.