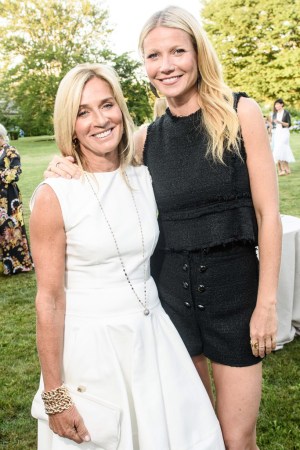 It was the reaction of nearly all stepping into Gwyneth Paltrow’s backyard on Thursday night.  A small group had been invited to her Amagansett, N.Y., home to toast Goop’s longtime partnership with Net-a-porter (and, truthfully, to get a peak at Gwynie’s pad).

Indeed, the scene was idyllic. Hammock-housing oak trees and hydrangea blooms dot the grounds. Three long, candle-covered tables stretched across the sprawling lawn. A three-piece seersuckered jazz band played by the bar, offset by the sound of lapping waves from the beach a block away. Her children, Apple and Moses, giggled with friends as they played in the yard while the grown-ups sipped organic cocktails. It was as Goop-tastic as can be expected, from the burlap table runner to the linen-cloaked lanterns in the tree branches to the artfully plated sablefish meal.

The crowd was Paltrow’s nearest and dearest: Jessica Seinfeld, who between catching up with Jennifer Fisher, thanked Sarah Rutson for a just-received gift. Jerry Seinfeld had unintentionally plugged the e-tailer on a recent episode of “Comedians in Cars Getting Coffee,” telling Julia Louis-Dreyfuss how avidly his wife shops there. Cynthia Rowley brought her stunning teen daughter Kit; the two taking a break from spending the day surfing in Montauk. “I surf, she shreds,” Rowley said of her daughter’s skills. Even Chris Martin was there. The famously amicable divorcees sat only three seats down from one another.

After guests finished their plates of summer tomatoes and grilled ricotta, Rutson made a toast. “What the Hamptons is about is relaxing. And when I clicked on to Goop earlier today, I actually saw that it taught me how to optimize my yawn reflex,” she said to chortling guests. Indeed, a recent item on the site provided a step-by-step instruction on how to properly yawn. Apparently it’s a five-step process. “So I’m kind of in the mood for that,” she continued. “Between both the brands, we’ve got this relaxation thing down.”