The profitable jewelry brand is opening even more stores this year and looking at revenue growing to the hundreds of millions.

Gorjana is growing fast, but cofounder Jason Reidel wants people to know how long it took the jewelry brand to get here.

“We tell everyone how hard it is,” Reidel said, the “we” being his wife and cofounder Gorjana Reidel. “We didn’t sell something on ‘Shark Tank,’ there have been no home runs here. It’s been a lot of singles, a lot of little wins and little losses. There was never a day where we woke up like, ‘Whoa, everything’s changed!’”

Nevertheless, since starting Gorjana 15 years ago, with first-year sales hitting $70,000, the brand has grown exponentially. Another five stores are slated to open before Mother’s Day, bringing the total number of locations to 18, and its likely another five will open during the second half of the year. And the company is profitable, a must considering it’s yet to take on any outside investment, despite a growing number of calls Reidel is fielding from private equity. When it comes to revenue, Reidel demures, explaining he doesn’t want customers to get an overly corporate impression of the brand. Also, he says, “I don’t want to be like, ‘Hey, look at us.”

Still, Reidel admits the company’s growth has been impressive since it started in 2016 investing more in retail and direct-to-consumer after being almost entirely wholesale for a decade. All stores are profitable, with some seeing 40 to 50 percent year-over-year growth and 200 percent year-over-year growth in e-commerce. The plan this year is to see overall growth in the 80 to 90 percent range. “We’re starting to put up big numbers.”

But what’s a big number in terms of revenue? “To me, a number that’s actually meaningful, you’re getting to the $100 million mark,” Reidel said. “I’m not going to say that we’re on the cusp of being a $300 million brand, but if we keep putting up numbers like this, it’s feasible.”

Reidel noted that he recently had some consultants come in to help with planning, who insisted that Gorjana was a $250 million brand. “For my internal team to hear that, it was like, ‘Wow,’” Reidel said. He’s certainly excited about the business, but strikes a modest tone noting that being self-funded, Gorjana is not interested in growing for the sake of it.

“Going into the next three years, we’re definitely getting into some of those numbers north of $100 million, but I don’t want to be assumptive. What if in the next two years we don’t see any retail prospects we like? Maybe we’ll move slower then. We’re not in any kind of race.” 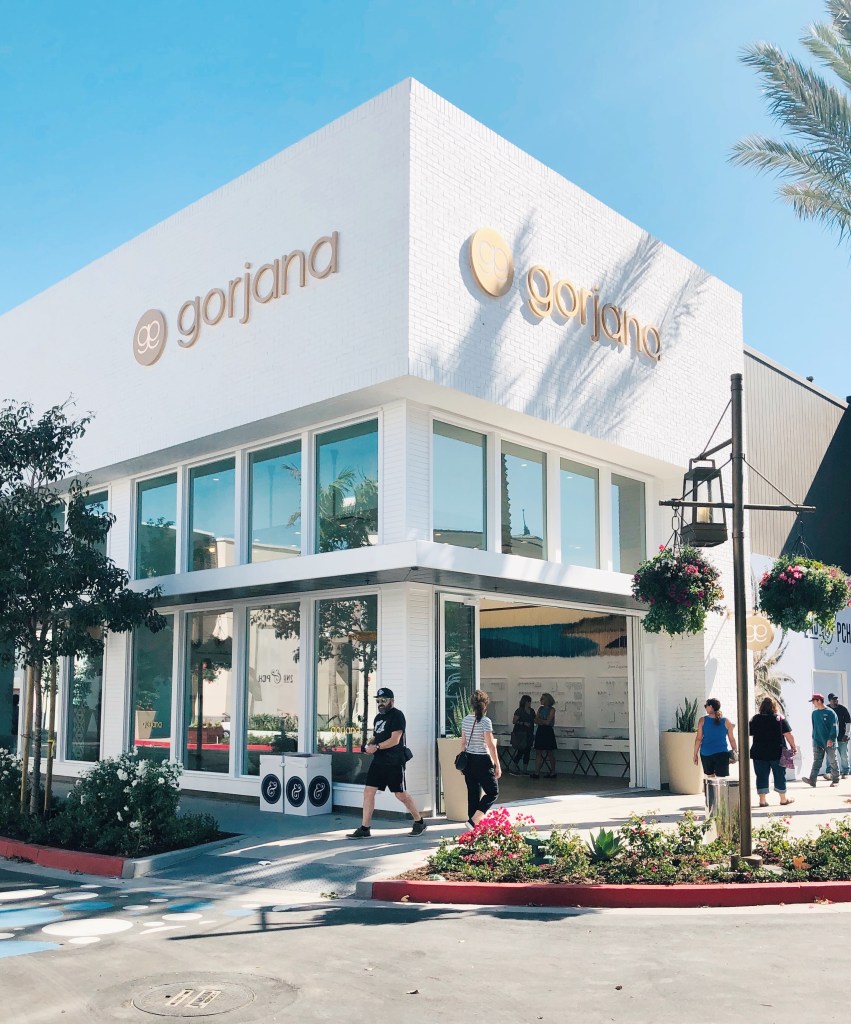 The overall retail strategy is direct negotiating with landlords and malls, shorter-term leases with options to extend and some market research that ultimately ends on “intuition,” rather than data alone. A majority of Gorjana stores are in California, where the company is based, with a growing number in New York, a “second home,” Reidel says.

“There are so many things that have to go right in retail, you think it’s 50 things but it turns out to be 150 and you have to learn really fast. We certainly didn’t have it all figured out, so having those learning be close to home, where we can get to the stores on a regular basis, it makes it easier.”

One such learning has been the Los Angeles market, which has turned out to be a more difficult market for Gorjana, with its Venice Beach store, especially compared to markets like San Francisco, Orange County and San Diego.

“L.A. is the most challenging, I think because there are so many people and it’s very decentralized,” Reidel said. “It’s tough, even though it’s so crowded. South Bay is a market we’re looking at, because even though it’s only 10 miles away from Venice, people do not go there because it takes an hour.”

Fifteen years in, Reidel is still learning and figuring things out, right now, he’s pleased with the business as it is. There are no plans to take an outside investment and selling the business doesn’t have appeal. That could change, and he admits it, but he’s yet to have a call with an investor who he felt would be a good fit and thinks of Gorjana as “a child we’ve raised.”

“We didn’t build it just to get rid of it,” he said. “I look at the brands I admire and they’re family run brands that have been in the family for a while and that’s what we want to do. It doesn’t mean our family won’t expand, with employees or investors, but we really don’t have a plan like that. We just take it a day at a time.”