Gossard Returns to U.S. With NAP

The 84-year-old Gossard brand will be distributed exclusively in the U.S. by NAP Inc., after completion of the sale of Sara Lee Branded Apparel's European operation to an affiliate of Sun Capital Partners Inc. 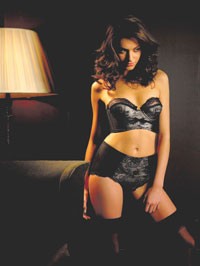 NEW YORK — The 84-year-old Gossard brand will be distributed exclusively in the U.S. by NAP Inc., after completion of the sale of Sara Lee Branded Apparel’s European operation to an affiliate of Sun Capital Partners Inc.

The name for the new division of the Sun Capital operation, based in Boca Raton, Fla., is DBApparel. Sun Capital, a private investment firm, led the acquisition of Mervyns with Cerberus Capital Management in 2004 in a deal valued at $1.2 billion in cash.

Victor Lee, president of NAP, said he was “very pleased to bring to the U.S. this collection of affordable European luxury.”

“We are reintroducing Gossard London to the U.S. with a renewed vigor from the recent Gossard-Sun Capital alliance,” Lee said. “In addition, Gossard will be introducing a number of new and innovative products, which will be available in Europe and the U.S. for the first time.”

Gossard is best known for its Super-Uplift Bra that Gossard, based in the U.K., distributed in the U.S. in the Eighties and Nineties. But the Gossard name disappeared from the American market in 1994 after Sara Lee acquired the distribution and marketing rights for the cleavage-enhancing Wonderbra brand and began running multimillion-dollar TV and print advertising campaigns.

“We are extremely pleased with the strategies NAP has developed for distributing the brand in the U.S., as well as the marketing behind the brand,” Adkins said.

Adkins has held various executive posts at Sara Lee Branded Apparel Europe since 1990, including vice president of the Northern Europe operations, and president of the Filodoro hosiery business.

The collection, which was previewed last week at the Lingerie Americas trade show here for winter 2006, features three groups: Gossard Vintage, modern, classic corsetry; Smooth Glamour, a group of seamless shaping undergarments with lace-illusion prints, and Superboost Secret, multipurpose items such as a bustier that features ribbon lace-up back detail and bottom-boosting briefs. The Superboost group also includes a range of satin styles overlaid with detailed embroidery and ribbon finishes, as well as shapewear items of Chantilly lace.

Colors include black, pink, cappuccino, plum and teal. Wholesale prices were not available. Suggested retail for bras will average $36 to $55, while panties will go for $16 to $29. Bra sizes are 32A to 38D. Panties are sized XS, S, M, L and XL.

Distribution is aimed at major department and specialty stores.