With its customers plunking down $200,000 for the average store purchase — and $35,000 at the shop-in-shops — Graff doesn’t exactly see itself as the usual luxury jeweler.

“We will concentrate on the high-end market... 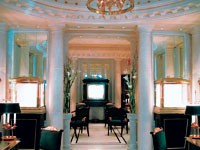 With its customers plunking down $200,000 for the average store purchase — and $35,000 at the shop-in-shops — Graff doesn’t exactly see itself as the usual luxury jeweler.

“We will concentrate on the high-end market forever,” said Henri Barguirdjian, Graff’s president in the U.S. “This is what our clients want, and this is what we do best.”

In fact, “I don’t believe we have competition at our level,” he said. “When a client asks to see a selection of 15-carat diamonds, we can put 10 to 12 rings on a tray. Our selection is unmatched.”

London-based Graff, which is famous for its big yellow diamonds, is one of the world’s most exclusive jewelers, and is poised to grow in the U.S., which already generates 50 percent of Graff’s sales. The company, which is private, does not release sales figures.

“There will never be as many Graff stores as Tiffany stores,” Barguirdjian said. “Tiffany is a great company, but it’s in a different market and it does a huge volume. Over the next year, Graff will open stores in Chicago and Las Vegas and increase its number of shop-in-shops at Saks Fifth Avenue to 22.

“The U.S. is extremely important to us. Fifty percent of all diamond jewelry sold in the world is sold in America and Mr. [Laurence] Graff has spent a lot of time, effort and capital in developing the U.S. market,” said Barguirdjian, referring to the chairman and founder of the company.

In November, Graff is to open its biggest store on Chicago’s East Oak Street. The 7,000-square-foot unit will be housed in a four-story town house — and many locals are eager for the ribbon to be cut.

“Chicago, and the surrounding area, is a very strong market for us — we already have a solid client base there — and we’ve already been getting phone calls from customers asking when the store is going to open,” Barguirdjian said.

In April, Graff plans to open a 1,700-square-foot store at the Wynn Las Vegas. All the stores have been designed by Laurence Graff with the American architect Jeff Smith. Barguirdjian said the next Graff store would most likely open on the West Coast, although the company has not made any final decisions.

Graff has two U.S. units, on Madison Avenue in Manhattan and in Palm Beach, Fla. By the end of this year, there will be 15 shop-in-shops at Saks, which sell less expensive pieces from the main Graff collection, such as yellow diamond pendants, studs, charm bracelets and gypsy earrings. The average Graff sale at Saks is $35,000, said Barguirdjian.

He added that the moment is right to up the ante in the U.S.

“It’s a very favorable time for high-end luxury goods,’’ he said. “This year has been infinitely more robust than everyone had anticipated. The economy was not as bad as some thought it was going to be. I think if we have a good post-election first quarter in 2005, then it’s going to be a good year.”

Europe, which generates the other 50 percent of Graff’s sales, has been “up and down” over the past year, with London, Moscow and Monte Carlo doing extremely well, he said. Russia is becoming a dynamic part of the Graff business, and the company is exploring its options with regard to retail outlets in Southeast Asia.

While the bulk of Graff’s sales come from classic items, Barguirdjian said it’s crucial that the company keep up with fashion trends. He pointed to a recent Graff ad in the New York Times that shows cascade diamond earrings in two sizes, priced at $100,000 and $500,000, respectively. “I think that’s the spirit of what women are looking for today,” he said.

More than 75 percent of Graff’s clients are repeat customers. “It very often starts with a ring — engagement or anniversary — and then the customer moves into earrings, necklaces and bracelets,” Barguirdjian said.

The average clients are in their mid-40s to mid-50s, men and women who are entrepreneurs, and often contemporary art collectors.

Barguirdjian said he is happy that other high-end jewelers such as Asprey, Garrard and De Beers LV are going after the U.S. market share. “It shows that business is very healthy,’’ he said. “It’s like ‘Welcome to the club!’ The sun shines for everybody. Men are buying jewelry for the women they love, and women are increasingly buying jewelry for themselves. When they all stop doing that, then we’ll start worrying.”